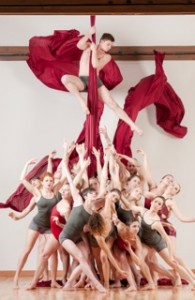 This summer, Aerial Dance Chicago (ADC) and Elements Contemporary Ballet will share the stage for a one-night-only concert in which each dancer will truly soar. The July 19performance, titled Silk and Steel, will take place on the main stage of Skokie’s North Shore Center for the Performing Arts and feature a world premiere collaboration between the companies as well as audience favorites from ADC’s and Elements’ original repertories.

To prepare for this unique collaboration, the dancers of both companies have been “cross-training” in each others’ expertise for the past year – ADC members studying with Elements Artistic Director Mike Gosney and Elements dancers training in ADC’s community aerial dance program. Now in rehearsal at ADC’s new studio space at 4028 W. Irving Park Rd, the new work, titled Surge, is being co-created by Gosney, ADC Artistic Director Karen Fisher-Doyle, and Executive Creative Director Chloe Jensen. Surge maximizes the artistic resources of the companies as it involves every dancer of both ADC and Elements (a total of 21 dancers). Dancers from both companies will not only perform Gosney’s highly stylized neo-balletic choreography but also execute complex aerial dance on the seven hanging silks being used for the piece.

Gosney, Fisher-Doyle, and Jensen have developed abstract themes for the work that deal with self-realization and attainment of higher knowledge through abandonment of fear. Movement structures seamlessly sweep the unique aesthetic of contemporary ballet into the “vertical realm” and complement the awe-inspiring aerial technique of the ADC artists. The 15-minute Surge plays out in three sections, each set to a different piece of music: a Max Richter work for piano and violin; an electronic creation by songwriter Christian Collier; and Arvo Part’s Vater Unser, which serves as an auditory backdrop for a middle pas de trois danced by an aerial dancer in rope-and-harness, an earth-bound ballerina, and a male dancer who partners both.

The concert will also feature two past works by ADC: a quartet by Jensen utilizing horizontal bars and vertical ropes; Symbiotic (2009), critically acclaimed for its stunning optical illusions; and the highly original, emotionally-charged unEarthed (2011), in which an oceanic, custom designed aerial hammock set creates a backdrop for revealing human attitudes about their relationship with the natural environment. Additional repertory presented by Elements will be a re-mounting of Gosney’s 2010 ballet, Curiosity, plus a revival of Joseph Caruana’s award-winning pas de deux from 2009, Angel.

Featuring mixed-repertory by both companies and the world premiere of Surge, a unique collaboration by the artists of Elements and ADC

Silk and Steel is supported in part by the MetLife New Stages for Dance II initiative (administered by Dance/USA in partnership with Audience Architects).

Founded in 1999 by dancer/choreographer and National Champion Acrobat Chloe Jensen, and under the Artistic Direction of award-winning choreographer Karen Fisher Doyle, Aerial Dance Chicago has a vision of taking dancers into flight. ADC is a leader in the field and an integral part of the international movement toward the development of the art of aerial dance. The mission of Aerial Dance Chicago is to generate a positive impact on humanity through the art of aerial dance. With innovative choreography, engaging performances and energizing hands-on experiences, ADC’s programs enrich, educate, connect and strengthen people of all walks of life.

Aerial Dance Chicago distinguishes itself by blending inventive aerial choreography with an original contemporary style on the traditional dance floor, as well as retaining a strong dance aesthetic in its airborne choreography. Characterized by thrilling physicality and originality, the company’s work has been presented across the United States at museums, schools, universities and festivals, including popular hometown venues such as Navy Pier, Museum of Science & Industry, Millennium Park and the historic Grand Ballroom of the Drake Hotel. The company inspires everyday people to challenge their own assumed limits to reveal undiscovered potential. Through highly original and physical programming, the company reawakens humanity’s craving for live, kinetic and creative experiences, and contributes to the health and empowerment of the community.

In January 2014, ADC opened Chicago’s first dance center dedicated to the discipline of aerial dance. This New Center for Aerial Dance houses professional company rehearsals and training, training programs for dancers in the community interested in pursuing professional careers in aerial dance, and high quality instruction in aerial dance for youth, teens, adults and senior citizens.  ADC’s new space is located at 4028 W. Irving Park Rd, Loft A, with immediate access to 90/94 and the Irving Park Blue Line and Metra stop. This new center is situated at a cultural and transit hub, and is an asset to the creative community in Chicago  www.aerialdancechicago.org

Elements Contemporary Ballet’s mission is to present innovative new works of ballet using an original, distinctive style, and cultivate an appreciation for ballet by producing dynamic dance performances that are relevant and exciting to today’s audiences.

Elements Contemporary Ballet was co-founded by Artistic Director Mike Gosney and dancer/Managing Director Joseph Caruana in 2005. The company presented its first full-length concert one year later on September 19, 2006 at the Harold Washington Library in downtown Chicago. Using the four elements of nature—fire, earth, air, and water, representing expression, physicality, focus, and freedom—as a basis for creating unique and high-caliber new works, Gosney and Caruana have built a repertory that includes work by in-house artists as well as up-and-coming choreographers from such prestigious companies as Houston Ballet, Hubbard Street Dance Chicago, BJM Danse, Armitage Gone! Dance, and Cullberg Ballet. The company has now grown to present cutting-edge dance concerts annually at Chicago’s Athenaeum Theatre as well as participate in programming such as Palm Desert’s McCallum Theatre Dance Under the Stars Choreography Festival, the Chicago Cultural Center’s Dancebridge program, and The A.W.A.R.D. Show! at Dance Center of Columbia College. The company also partners with Urban Gateways Center for Arts Education, presenting its dance-history performance, The Evolution of Ballet, throughout Chicago area schools.

Elements Contemporary Ballet develops its work by discovering a new way of moving through classical form. The company trains heavily in Mike Gosney’s original “Four Elements” method, a system consisting of four complementary classes: “Earth Class,” which focuses on strength and physical conditioning, “Air Class,” building flexibility, balance, and body line, “Water Class,” geared towards personal expression and movement exploration, and “Fire Class,” which develops performance quality and endurance in dancers. The combination of these classes creates a dancer that is strong, focused, expressive, and brave – ideal for the repertory the company is building. The company also seeks out guest choreographers that have a love for the classical vocabulary and experiment with ways to toy with, exploit, or re-imagine ballet in interesting ways. Elements strives for its work to be relevant to today’s audiences, not specifically by interpreting current events in its ballets, but rather by addressing eternal themes of the human experience such as spirituality, personal relationships, and the desire to understand and connect with the natural world. Above all, Elements aims to present poignant work and bring an experience of beauty or emotional realization to audiences.

In 2014, Elements is straying from its usual programmatic structure and presenting two distinct collaborative productions: Silk and Steel, a shared concert with Aerial Dance Chicago to take place at the North Shore Center for the Performing Arts in Skokie, and The Sun King, an original story-ballet to be presented at the Jay Pritzker Pavilion in Millennium Park which will feature live music by Baroque Band. Inspired by the 2000 French film, Le Roi Danse, The Sun King will be a dramatic expose of Louis XIV of France’s infamous court composer Jean-Baptiste Lully. An additional component to this project will be a full feature film of the ballet created in partnership with GayTVontheGo producer, Jhonmar Castillo. www.elementsballet.com