Damn Yankees the Richard Adler and Jerry Ross 1955  Faust based musical using the Great American Pastime as its major plot device is a bittersweet and nostalgic journey back to a time when baseball, the national pastime, had innocence to it and was void of scandal, drugs, and money.  It truly had heart.

Light Opera Works has staged a fine production that is faithful to the original production.  Director/Choreographer Kevin Bellie has captured the heart of the show and the Fosse-style choreography that is woven into the fabric of the piece.  His choreography excels in the

“Two Lost Souls” number in the 11:00 slot where the stage is filled with strong dancers who can deliver the precision needed to drive it home.  One of the big numbers, “Heart” does not fare as well because not all of the baseball players possess the skill level as dancers to land some of Bellie’s moves.  I must also admit that this shows a maturity in his work that I have not seen in some of his other productions at Circle Theatre.  However what some of the baseball team may lack in dance technique they make up for in powerful vocals.  The voices blend beautifully and they hit a home run in “Heart” and “The Game”.

The Musical Direction under the masterful baton of Roger Bingaman is stellar as is the full 33 piece orchestra (always a strong force at Light Opera Works and what sets them apart from the other musical theatres) which delivers the classic score with rich tone and hot jazz.

Standout performances include Kirk Swenk as Joe Boyd (a marvelous actor with a strong voice), Judy Knudtson as his wife Meg Boyd (looking right out of the era), Jenny Lamb as sport’s reporter Gloria Thorpe (very well cast) Maggie Clennon Reberg as Sister, Rick Rapp as Coach Van Buren and Ryan McBride as Smokey( I believed he was a baseball player).

Rudi Hogenmiller delivers a delicious turn as the devil, Mr. Applegate, in the iconic role created by Ray Walston and fits the part well.   Rudi is at his best when singing and dancing in “Those Were the Good Ole Days” and I wish he would have performed in the Mamba number “Who’s Got the Pain?” which was one of the weakest moments in the show.  Hogenmiller is a true showman and a favorite with Light Opera Works (he is also the Artistic Director who has, with General Manager Bridget McDonough, raised the quality of the company to the professional level).  I wish he would have crafted a more natural overall delivery in the character so that when he put on other character masks they would have more impact.  I felt that his performance bordered on caricature and he was “acting” much of the time so we never get the duplicity needed to believe he is the devil. 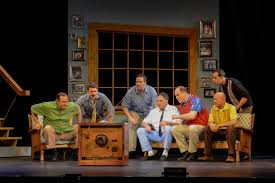 While Erica Evan’s Lola has genuine heart, a strong voice and a lot of talent she lacks the dangerous edge, maturity and panache to make the character fire on all cylinders and allow the proper arch from seductress to the genuine, loving Lola.    Evan’s does capture the latter part of her character beautifully and she has chemistry with Acker which is the key to making important this relationship work.

However, when Brian Acker (Joe Hardy, the younger version of Joe Boyd) bursts through the door in the gorgeous number “Goodbye Old Girl” he sets the stage on fire.  He is a rare breed of racehorse in Chicago – a triple threat of talent, great looks and a deep, rich baritone that soars.  Acker possesses that rare ingredient – star quality, and a refreshing honesty in his acting that I have not seen in much of the Chicago musical arena.  He plays with heart and you believe his every moment.  I have attended several productions of Damn Yankees (one of my personal favorites) and can say that he is the finest Joe Hardy I have seen.  The casting could not have been better.

One of the best moments in the show is his duet with Meg Boyd (Julie Knutdson) his wife who has no idea as to his true identity as her husband, in the beautiful ballad “Near To You”.  There is a moment when they are embracing and caught up in the moment and then pull away and look at each other full of wonder, love and embarrassment.  In this moment they capture a main theme of the show, “you never know what you have until you lose it”.

One of my big gripes with Light Opera Works has been with the sets which lack the quality of the other elements.  With Adam Veness’ set they have hit a home run.  This is one of the best sets I have seen at Light Opera Works.  His use of space, materials and eye for design are keen and provide Bellie with the perfect palate to paint upon.  There is a patina, simplicity and polish to his design that sets him apart and marks him as one of Chicago’s best.

The costumes by award-winning Jesus Perez and Jane Debondt are beautifully designed and tailored.  I judge detail in costume design by the footwear (which usually fails miserably) and in this production the footwear is one of the stars.  The color palates utilized by them to define character is exceptional and the era of 1955 is spot-on in its detail with the one exception of Lola’s costumes.  I was surprised to find that she was not in fishnets and a more vibrant dress in the “Lola” number, however I did like the beautiful, form fitting black velvet highlighted dress she first appears in.   They provide the show with an expensiveness that is usually only found in full Equity houses.

Andrew Meyers lighting design is very effective, however I wish that he would have used more red when Lola is onstage.

With summer and baseball season upon us what better way is there to spend it than journeying to Light Opera Works for this rarely revived, well produced and nostalgic look at a time when America still had innocence and heart.