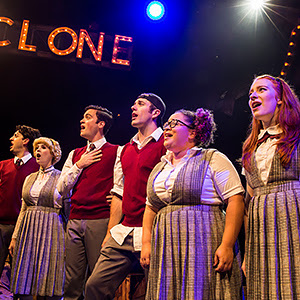 Chicago Shakespeare Theater (CST) announces today the extension of its U.S. premiere production of Ride the Cyclone, a new musical with a refreshingly offbeat twist by Brooke Maxwell and Jacob Richmond—now playing through November 15, 2015. Directed and choreographed by multiple Jeff Award-winner Rachel Rockwell, this deliciously dark musical comedy originated as a cult classic cabaret piece in Canada and has been further developed here at the Theater with Chicago Shakespeare Creative Producer Rick Boynton. Performances during the extension week include: Tuesday, November 10 at 7:30 p.m.; Wednesday, November 11 at 7:30 p.m.; Thursday, November 12 at 7:30 p.m.; Friday, November 13 at 7:30 p.m.; Saturday, November 14 at 3:00 p.m. and 8:00 p.m.; and Sunday, November 15 at 2:00 p.m. and 6:00 p.m.Part comedy, part tragedy—and wholly unexpected—this wildly original play delivers surprises at every hairpin turn. The lives of six teenagers from the St. Cassian chamber choir are cut short in a freak accident aboard a doomed roller coaster. A mechanical fortune-teller, The Amazing Karnak, invites each to compete for the singular opportunity to return to life. Through a score that encompasses everything from pop and glam rock to Brechtian cabaret and rap, they share their stories—weaving a tale that is funny, irreverent and ultimately heartrending. Add in a funky bass-playing rat named Virgil and nothing in this entire journey is quite as it seems.

At once quirky and smart, edgy and beautiful, Ride the Cyclone began life as a song cycle from the Canadian theater company Atomic Vaudeville. Its combination of uproarious humor and macabre subject matter earned it a cult following among audiences across Canada. Multi-talented creative duo Brooke Maxwell and Jacob Richmond collaborated to create the book, music and lyrics for the musical. Returning to Chicago Shakespeare for her tenth production, lauded Chicago musical theater director Rachel Rockwell joined forces with CST Creative Producer Rick Boynton to further develop the piece for its U.S. premiere. Rockwell is joined by Musical Director Doug Peck, a six-time Jeff Award-winner for musical direction at theaters across the city.

For a complete performance listing and more information about the production, visit www.chicagoshakes.com/cyclone.

Ride the Cyclone is presented in the theater Upstairs at Chicago Shakespeare now through November 15, 2015. Tickets are on sale now for $32-48 with special discounts available for groups of 10 or more, as well as CST for $20 tickets available for patrons under 35. All patrons receive a 40% discount on guaranteed parking in Navy Pier garages. For more information or to purchase tickets, contact Chicago Shakespeare Theater’s Box Office at 312.595.5600 or visit the Theater’s website at www.chicagoshakes.com.

ABOUT CHICAGO SHAKESPEARE THEATER
Chicago Shakespeare Theater (CST) is a leading international theater company and the recipient of the Regional Theatre Tony Award®. Under the leadership of Artistic Director Barbara Gaines and Executive Director Criss Henderson, CST is dedicated to creating extraordinary production of classics, new works and family programming; to unlocking Shakespeare’s work for educators and students; and to serving as Chicago’s cultural ambassador through its World’s Stage Series. Through a year-round season encompassing more than 650 performances, CST attracts 225,000 audience members annually. One in four of its audience members is under eighteen years old, and today its education programs have impacted the learning of over one million students. CST is proud to take an active role in empowering the next generation of literate, engaged cultural champions and creative minds.