James Joyce was a very complicated man.    Watching Court Theatre’s re-mounting of the musical version of his complex short story “The Dead” only cements that notion.  Taking place in 1904 during the Feast of the Epiphany, in Dublin, the story weaves the emotional tale of souls on the verge of various awakenings.  Some more subtle than others, but each character is allowed to evolve and devolve before our eyes, if you pay close attention.

James Joyce’s The Dead is not a play for everyone, and at times the holes in the book come roaring to the forefront.  However, director Charles Newell, along with long time musical collaborator Doug Peck are both able to work around these issues, and in their capable hands, The Dead is worthy of this resurrection, which had its last outing in 2003.

As in the short story, the main plot point takes place at the Morkin sister’s annual January party. The narrator of the evening is Gabriel Conroy (Philip Earl Johnson), a university professor and husband to Gretta (the stellar Susie McMonagle).   It is when Gabriel observes his wife singing and reminiscing  about an old flame that the depth of this piece morphs into fruition.   When adequately dissected, The Dead becomes a character study of lives not authentically lived to the fullest, and for some, this realization comes too late to reverse course.

The ensemble is a fierce and solid core of some of Chicago’s finest actors.  Mary Ernster (Julia) and Anne Gunn (Kate) are the Morkan sisters, the prior, facing her own mortality; Rob Lindley, who was stunning Court’s Angels In America, turns in a rip-roaring performance here as Freddie, the life of the party who falls victim to his addiction to both liquor and a mother’s acceptance (played by an underused Rebecca Finnegan); Lara Filip, uses her gorgeous soprano voice to full effect as Molly; and Jim DeSelm is a winning Michael (and a fine guitarist). 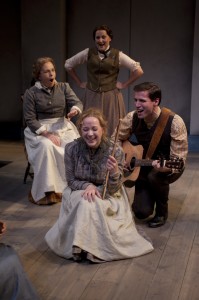 Mr. Newell and Mr. Peck have elected to have the actors play their own accompaniment for the musical numbers.  As has been witnessed with some other recent productions, more times then not, that decision usually does not fair well for the actors or for the show. However, The Dead is the exception.   The actor/musicians blend effortlessly and are allowed to move the story forward and no time is the truth ever sacrificed as Shaun Davey’s music is gloriously exercised. As most of the lyrics are taken for Joyce’s work, the poetic nature of the piece is instantly palpable. a

The problem with The Dead lies more with Richard Nelson’s book, in combination with the music, then any production sidebars.  The musical itself shifts tone when the Conroy’s begin their emotional unraveling without ever having the score follow that shift. Instead the music remains stagnate as the actors are turning emotionally dark.  As such, the actors are not able catch up the book’s turn of events, and in the end, it doesn’t deliver the needed gravitas at the end.

Though it may not seem like it from the title, James Joyce’s The Dead is a nice addition to the onslaught of traditional holiday offerings.   Moreover, The Dead lets us reflect on the authenticity in how we are expected to live our lives.  Each of us, at one point in time will face an Epiphany.  Mr. Joyce’s story reminds us that sometimes that Epiphany comes at a point of no return.