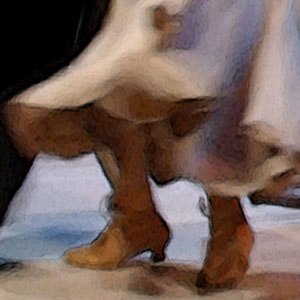 Artistic Director Charles Newell and Music Director Doug Peck, whose professional collaborations include Porgy and Bess and Caroline, or Change, team up for a delightful reimagining of Court Theatre’s eccentric holiday classic, James Joyce’s “The Dead.” Filled with the warmth of a flickering hearth, the fervor of an Irish folk song, and the mystery of a snowy winter’s eve, this piece tells the tale of a group of family and friends as they gather to sing and dance in celebration of the Feast of the Epiphany in Dublin at the turn of the last century. Hauntingly beautiful and joyfully spirited, James Joyce’s “The Dead” offers a heartfelt accompaniment to the holiday season.

“Doug Peck and I are returning to James Joyce’s “The Dead” as the next step on a journey that includes Caroline, or Change and Porgy and Bess,” says Artistic Director Charles Newell. “With these shows, we learned important lessons about ritual and community that we’re applying to Richard Nelson and Shaun Davey’s masterful musical: for example, all of the instrumentation will be performed by the characters themselves, making it a more authentic experience with even more emotional depth. This will be a production of “The Dead” unlike anyone has ever seen before.”

James Joyce (Novelist) (1882-1940) remains one of the twentieth century’s most lauded and accomplished authors. Born into an Irish upper middle class family, he observed his father’s drunken spendthrift habits and his mother’s biennial pregnancies. As a young man, he renounced first Catholicism, then the Middle Class and finally Ireland for a continental Bohemian life. Although Joyce spent his adulthood in Italy, Zurich and Paris, his imagination remained rooted in the Edwardian Dublin of his youth. This Dublin seemed paralyzed by the English rule and economic depression, yet was profoundly affected by strong cultural and political impulses finalized by Irish Nationalism. In his four masterpieces, Dubliners, Portrait of the Artist as a Young Man, Ulysses, and Finnegans Wake. Joyce explored this world using increasingly radical literary techniques. In 1903, Joyce returned from his first self-exile in Paris to attend to his dying mother, May Joyce. She died in August of 1903, and a year later Joyce met Nora Barnacle, the love of his life, striding along a Dublin street. Nora, from a humble Western Irish family, profoundly affected Joyce’s eye, ear, and soul. In “The Dead,” the last of his Dubliners stories and the only one written in Europe, Joyce used a story from Nora’s youth to examine a spiritual world of “the living and the dead.”

Richard Nelson (Author/Adaptor/Lyricist) is the author of many plays, including Conversations in Tusculum, Frank’s Home, How Shakespeare Won the West, Rodney’s Wife, Franny’s Way, Madame Melville, Goodnight Children Everywhere (Olivier Award Best Play), The General From America, New England, Left, Misha’s Party (with Alexander Gelman), Columbus and the Discovery of Japan, Two Shakespearean Actors (Tony Nomination, Best Play), Some Americans Abroad (Olivier Nomination, Best Comedy), Principia Scriptoriae. His musicals include James Joyce’s The Dead (with Shaun Davey, Tony Award Best Book of A Musical), My Life With Albertine (with Ricky Ian Gordon), andParadise Found (with Hal Prince, Ellen Fitzhugh and Jonathan Tunick). He has adapted and/or translated numerous classical and contemporary plays including Chekhov’s The Seagull, The Wood Demon, Three Sisters, Strindberg’s Miss Julie, The Father, Goldoni’s Il Campiello, Beaumarchais’The Marriage of Figaro, Pirandello’s Enrico IV, Moliere’s Don Juan, Erdman’s The Suicide, Fo’sAccidental Death of an Anarchist, and Jean-Claude Carriere’s The Controversy of Valladolid. His work for film and television includes Ethan Frome (Miramax Films), Sensibility and Sense and The End of a Sentence (American Playhouse). He has written numerous radio plays for the BBC. He is an Honorary Associate Artist of the Royal Shakespeare Company, a recipient of the Academy Award in Literature from the American Academy of Arts and Letters and the 2008 PEN/Laura Pels Master Playwright Award. He was born in Chicago.

Shaun Davey (Composer/Adaptor/Lyricist) was born in Belfast and lives in Wicklow. He has chosen, in his concert works, to explore the turning points in Irish history, celebrating that which unites rather than divides the Celtic people. His works include The Brendan Voyage, The Pilgrim, Granuaile, Concerto for Uilleann Pipes and Orchestra, The Relief of Derry Symphony and the Concerto for Two Harps. Shaun Davey’s works have been performed at the Sydney Opera House; Royal Festival Hall, London; the Albert Hall, London; the Glasgow Royal Concert Hall; Munich Gasteig; the Quebec Tercentenary Festival; the New York Arts Festival; the Queen’s Festival, Belfast; the Edinburgh Folk Festival; and at music festivals in Lorient and Rennes in Brittany, St. Chartier and Romans in France and at Expo ’92 in Spain.

Charles Newell (Director) has been Artistic Director of Court Theatre since 1994, where he has directed over 30 productions. He made his Chicago directorial debut in 1993 with The Triumph of Love, which won the Joseph Jefferson Award for Best Production. Directorial highlights at Court include Angels in America, An Iliad, Porgy and Bess, Three Tall Women, The Year of Magical Thinking, The Wild Duck, Caroline, Or Change, Titus Andronicus, Arcadia, Man of La Mancha, Uncle Vanya, Raisin, The Glass Menagerie, Travesties, Who’s Afraid of Virginia Woolf?, Hamlet, and The Invention of Love. Charlie has also directed at the Goodman Theatre (Rock ‘n’ Roll), the Guthrie Theater (Resident Director: The History Cycle, Cymbeline), Arena Stage, John Houseman’s The Acting Company (Staff Repertory Director), the California and Alabama Shakespeare Festivals, Juilliard, and New York University. He is the recipient of the 1992 TCG Alan Schneider Director Award. He has served on the Board of Theatre Communications Group, as well as on several panels for the National Endowment for the Arts. Opera directing credits include Marc Blitzstein’s Regina at the Lyric Opera of Chicago, and Rigoletto at Opera Theatre of St. Louis. Charlie is a multiple Joseph Jefferson Award (Chicago’s highest theatrical honor) nominee and recipient.

Doug Peck (Music Director) is the winner of five Joseph Jefferson Awards (Porgy and Bess,Caroline, or Change, Carousel, Fiorello!, Man of La Mancha) and two After Dark Awards (Guys and Dolls, Hello, Again). Other favorite projects include Dreamgirls, Shenandoah, Fiddler on the Roof,Cabaret, James Joyce’s “The Dead,” A Catered Affair, Hair, Grey Gardens, Oh, Coward!, My Fair Lady, Beauty and the Beast, Raisin, Animal Crackers, and Mary Zimmerman’s acclaimed production of Candide. Peck can be heard on the recordings Bright Young People: The Songs of Noël Coward,Foiled Again Live, and Loving, Repeating: A Musical of Gertrude Stein. He is a creative partner with Goodman Theatre, an artistic associate with Porchlight Music Theatre, and a faculty member of the National High School Institute of the Arts. A proud Northwestern University graduate, Peck also trained at the Interlochen Center for the Arts and is married to actor Rob Lindley.

Mary Ernster (Aunt Julia Morkan) makes her Court Theatre debut. Her Chicago credits include Mrs. Potts in Beauty and the Beast (Chicago Shakespeare Theatre), Margaret in The Light in the Piazza, Anna in The King and I (Marriott Theatre), Emily in Wings and Lily in Man of No Importance (Apple Tree Theatre), Beatrice in Much Ado About Nothing (First Folio), Titania in Another Midsummer Night(Goodman Theatre) and Sylviane in The Merry Widow (Lyric Opera of Chicago). Television credits include Early Edition (CBS), Normal (HBO), and Love Hurts (ABC). She has received twelve Joseph Jefferson Award nominations, two Jeff Awards, and one After Dark Award.

Lara Filip (Molly Ivors) makes her Court Theatre debut with a piece so dear to her heart. Recently, she appeared at the Marriott Theatre as Enid in Legally Blonde and at the Paramount Theatre as The Narrator in Joseph and the Amazing Technicolor Dreamcoat. Lara is also the Artistic Director for Arranmore Center for the Arts. As a singer/songwriter, she is in pre-production for an album with her band, Birdie Wing.

J. Michael Finley (Bartell D’Arcy) was born in Jonesboro, Arkansas but considers Lebanon, Missouri his hometown. He is a graduate of CCPA Roosevelt University. Recently, he appeared in Grease andHair at the Paramount Theatre, A Little Night Music at Writers’ Theater, The Christmas Schooner at the Mercury Theater, and Sweeney Todd at Drury Lane Oakbrook Terrace.

Philip Earl Johnson (Gabriel Conroy) has appeared at Court Theatre in The Mystery Cycle (Jesus) and in the National tour of Angels in America (Joe). Other Chicago credits include Talking Pictures(Willis) at the Goodman Theatre, Old Glory (Peter) at Writers’ Theatre, The Big Meal (Man #2) at American Theater Company, Picasso at the Lapin Agile (Picasso) at Steppenwolf Theatre Company, and The Herbal Bed (Rafe) at Chicago Shakespeare Theater. Regional credits include Cyrano de Bergerac (Cyrano) at the Illinois Shakespeare Festival. Recent television credits include Chicago Fire (NBC) and Unemployed (MTV). Philip Earl Johnson has also performed for 23 years as MooNiE the Magnif’Cent.

Regina Leslie (Mary Jane – Violin) was recently seen in the London-based tour of Barrie’s Peter Pan. Other acting credits include the national Equity tour of Scrooge: The Musical, The Quiet Man Tales at the Chicago Theatre Downstairs, A Christmas Carol at Goodman Theatre, Sketchfest at Collaboraction, and The Real Thing at Illinois Theatre Center. Regional credits include roles with The Ordway Center, Peninsula Players Theatre, and The Old Creamery. Regina plays violin with various ensembles, performing internationally and locally.

Rob Lindley (Freddie Malins) returns to Court Theatre having been seen in Angels in America, The Wild Duck, Caroline, or Change, and Carousel (Jeff nomination). Rob has also been seen in Candide(Goodman Theatre and Shakespeare Theatre in Washington D.C.); Cabaret (Drury Lane Oakbrook);Urinetown (Mercury Theatre); Wings (Apple Tree Theatre); A New Brain, Children of Eden, Closer Than Ever (Porchlight Music Theatre); Bach at Liepzig, Oh Coward! (Writers’ Theatre). Rob won a Joseph Jefferson Award for Best Actor in a Revue for Oh Coward! and can be heard on the company’s CD Bright Young People. His vocal trio Foiled Again has won an After Dark Award and their debut CD Foiled Again: Live is available on iTunes and CDbaby.com. Upcoming projects include directing Lady Day at Emerson’s Bar & Grill at Porchlight Music Theatre, where he is an Artistic Associate.

Steve Tomlitz (Mr. Brown – Cello) makes his Court Theatre debut. He was most recently seen in the David Cromer-directed production of Rent with American Theatre Company. Other Chicago credits include: Miracle on 34th Street and Ragtime with Porchlight Music Theatre, Hair with Tonkawa Theatre Tribe, Assassins with Boxer Rebellion Ensemble, and South Pacific at Metropolis Theatre.

Court Theatre is the professional theatre in residence at the University of Chicago continuing to discover the power of classic theatre. Court Theatre operates under an agreement between the League of Resident Theatres and Actors’ Equity Association, the Union of Professional Actors and Stage Managers in the United States. Productions are made possible in part by a grant from the Illinois Arts Council, a state agency, and by a City Arts grant from the City of Chicago Department of Cultural Affairs. Court Theatre is a constituent of Theatre Communications Group, the national organization for the American Theatre; the League of Resident Theatres; the Illinois Humanities Council; the Arts Alliance Illinois; the League of Chicago Theatres; and Hyde Park Cultural Alliance.

SYNOPSIS: Artistic Director Charles Newell and Music Director Doug Peck, whose professional collaborations include Porgy and Bess and Caroline, or Change, team up for a delightful reimagining of Court Theatre’s eccentric holiday classic, James Joyce’s “The Dead.” Filled with the warmth of a flickering hearth, the fervor of an Irish folk song, and the mystery of a snowy winter’s eve, this piece tells the tale of a group of family and friends as they gather to sing and dance in celebration of the Feast of the Epiphany in Dublin at the turn of the last century. Hauntingly beautiful and joyfully spirited, James Joyce’s “The Dead” offers a heartfelt accompaniment to the holiday season.