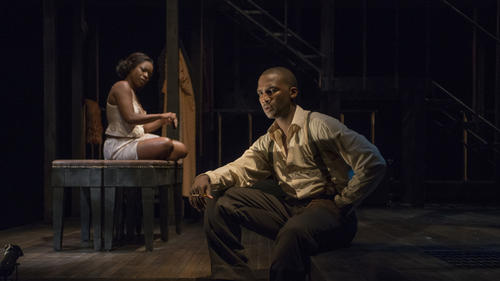 Highly Recommend: Theatre In Chicago Review Round Up

The analogous situations faced in the awe- inspiring theatrical Native Son are all too familiar. Produced through a collaboration of The Court Theatre and American Blues Theater, Richards Wrights prophetic novel reveals oppression by lifting the veil often worn in today’s society. Set on the South Side of Chicago in the 1930’s, when abuse and neglect of African Americans was rampant, Bigger Thomas labors to get ahead in a society that tows the line on prejudice and fortifies fear of black men. Working for a wealthy family, his fate becomes sealed through a series of violent events involving a young socialite.

The playwright Nambi E. Kelley has created an adaptation with both balance and ingenuity that give the audience time to digest the events before them. The double consciousness, or sense of looking at oneself through the eyes of others, reveals Bigger’s contempt and struggle in a world that wants nothing more than complete control of the powerless. The music, sound effects, and realistic set envelop you throughout the performance. This important story with sensational performances – is as relevant today as it was when it was written almost 75 years ago. From the story of Emmitt Till, who in 1955 was murdered for flirting with a white woman, to the recent shooting of Michael Brown, an unarmed black man in Ferguson Mississippi, to the countless tragedies perpetrated by the false premise that all black men are dangerous, Native Son captures the tone and defines the landscape young black men have dealt with for decades.

I highly recommend Native Son at the Court Theatre extended now though October 19th due to overwhelming demand.

Ticket prices range from $45 to $65. Visit www.courttheatre.org or call the box office at 773.753-4472 for more information or to obtain tickets