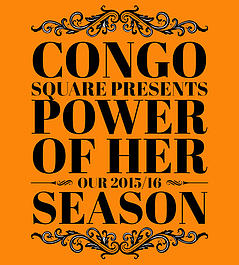 Congo Square Theatre Company announces its 2015/2016 season with two productions, a workshop series from the August Wilson New Play Initiative (AWNPI) and the return of the Owning Our Worth conversation series.  The theme for the sixteenth season is Power of HER, which will explore power, identity, opportunity and self-worth as it is related to artists who happen to be of color and female.

As we enter into a generation that will see gender and gender roles differently, Congo Square asks the question,  “What are the adjustments we need to make as a theater community?” Artistic Director, Samuel Roberson, Jr. offers, “Women  birth the voices of men and it is time we stop trying to speak for them and listen.”

Congo Square will kick off the season with the Jambalaya Series that will feature the August Wilson New Play Workshop Series, running October 1-11, 2015.
Over the years, Congo Square has been the incubator for innovative playwrights to introduce the new series of classics for African American literature.  To date, the August Wilson New Play Initiative (AWNPI) has launched hits like Deep Azure, Brothers of the Dust and Twisted Melodies.  This year’s AWNPI candidates are: 1st TIME by Tracey Conyer Lee; HOBO KING by Ensemble member Javon Johnson; PARADIGM SHIFT by Sabur Rashid; and GOOD GOODS by Christina Anderson.

By continuing this initiative, Congo Square will continue its legacy as innovators and leaders in the development of premiere work like Stick Fly by Lydia Diamond, which went to Broadway in 2012.   “Black playwrights are not afforded enough opportunity within the American Theatre landscape to fully develop their work and their authentic voice, says Artistic Director, Samuel Roberson, Jr. “Congo Square seeks to take a step forward in the leadership of nurturing  black artists by giving them a space to create without the need or pressure to filter their voice, while continuing to be the leaders in creating the new narrative for African American Theater.”

Spring 2016 takes a more serious note with Lekethia Dalcoe’s A SMALL OAK TREE RUNS RED, directed by Tony-nominated actor/director Harry Lennix,
June 3 – June 26, 2016.  In Lekethia Dalcoe’s world, entangled in history and unforgivable acts against humanity,  to forget is to forever perish, as seen in stories from the past as well as today.

The 2015/2016 OWNING OUR WORTH series will focus on issues of power, identity, opportunity and self-worth through the eyes of women of color in theater. Throughout the season, Congo Square will host a variety of intimate conversations and panel discussions centered around creating a new narrative for women of color across the theatre landscape.

Congo Square Theatre’s 2015-2016 season is made possible through funding provided in part by Target, the Joyce Foundation, Exelon, Bloomberg Philanthropies and The MacArthur Fund for the Arts and Culture at Richard H. Driehaus Foundation.