Complexities of the Real Eva Peron Lacking in Marriott’s EVITA 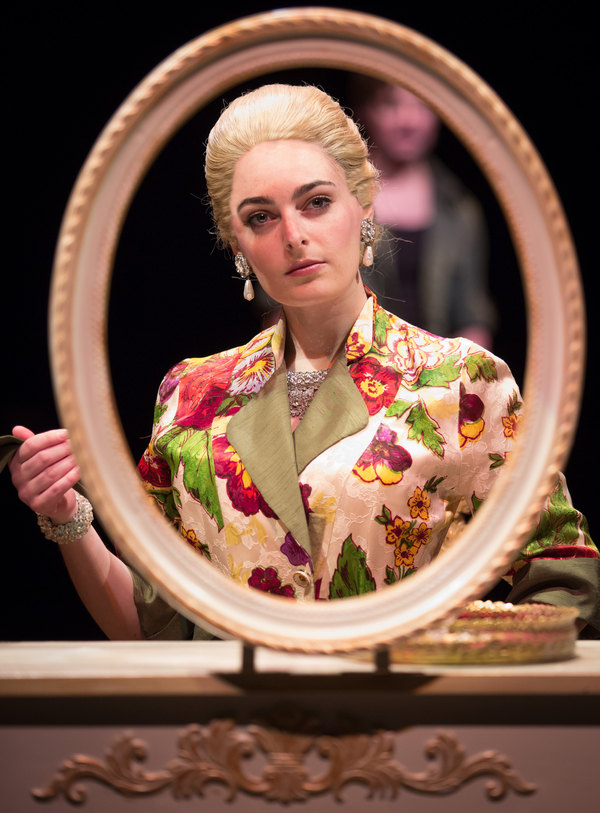 Before the Andrew Lloyd Webber and Tim Rice smash Broadway musical Evita many had either forgotten or knew nothing about the wife of Argentinian dictator Juan Peron who terrorized his country from 1946 to 1955. Lyricist Tim Rice was listening to a radio program where they aired some of Eva Peron’s fiery speeches and, being having always been fascinated by her, pitched the idea to Lloyd Webber to compose a musical about her life.

Eva Peron, the illegitimate daughter of a middle class businessman quite literally clawed and slept her way to become the most powerful woman in Argentina who was wildly adored by the impoverished shirtless ones. History has viewed her as a complex character, part ruthless bitch and whore, and part Saint who drove the British aristocracy out and is credited with building the first schools and hospitals for her country. She and her husband practiced a Machiavellian philosophy, ruling with an iron fist and silencing any detractors with prison, torture and death.

Evita was determined to become the first woman Vice President of Argentina when, at 33, she is diagnosed from terminal uterine cancer, dying before realizing her ultimate dream. In her wake were many shattered lives and a bankrupt country which had been one of the wealthiest nations in the world.

Having seen countless productions of Evita and studying her extensively has afforded me the opportunity to see many interpretations of this complex woman; many failed and few succeeded. Of course Broadway legend Patti LuPone is a hard act to follow with her stamp so indelibly embedded in the character. So what are the mandatory ingredients for success with Evita?

Stepping into her Christian Dior heels requires an actress with tremendous vocal power, seasoned maturity and control (Patti LuPone ended up with nodules on her vocal chords as a souvenir of her performance) who understands Eva Peron and can convey her multifaceted personality, charismatic charm and iron will. In the title role of Marriott’s engaging production of Evita Hannah Corneau unfortunately lacks in most crucial areas, focusing on the obvious.

In order for us to feel anything for Eva Peron she must seduce us in more through her acting skills than her looks. We must also believe she is from the peasant class of impoverished Junin, Argentina, not from Neiman Marcus (in front of the jewelry counter). And Corneau certainly looks expensive. I never believed she was an alley cat from the dirty streets but more of the Persian cat on the velvet cushion of a Fancy Feast commercial. I also feel that she fell into all of the traps I had mentioned earlier. From the git-go she plays her as a selfish, clawing bitch on wheels with a look of steel in her eyes and ice in her veins. She is a man-eater and I doubt that any Latin man would want to help her in her quest for being on top. Though not a beauty Eva Peron understood the art of seduction and could appeal to men as, well, a man. She used her brains more than her body to get to the top (it is a fact that Peron and Eva did not have a loving and sexual relationship but were more business partners in crime).

She is also shrill in her higher range which leads me to believe that she is not yet vocally developed enough to tackle this demanding role. As the show rides on her shoulders I never could connect to her or feel any compassion when she is dying. I found her performance to be black and white, lacking any shades of gray or complexity that makes her compelling to watch for two hours (although she did a fine job with the signature song Don’t Cry For Me Argentina).

As harsh as I sound regarding Corneau I was engaged and impressed with Director and Choreographer Alex Sanchez’s staging and overall production. He captures the spirit of Buenos Aires through the casting, superb dancing and his sheer talent for story-telling on a very demanding and unforgiving stage of the Marriott. The scenes flow effortlessly into one another in a cinematic way that keeps the action moving and the audience engaged. This is a work which shows great prowess and skill and he is to be commended for this fine production.

In the male lead of the demanding role of Che Guevera Austin Leach certainly looks the role, almost frighteningly. He possesses an immense amount of talent. However, much of the complexity of the role fails to come across and he sounds like the typical angry young man in the crowd instead of a highly conflicted (he was also a revolutionary like Evita and reflects much of her character) male counterpoint to Evita. They both play anger very well but lack a certain level of maturity which the precocious real life characters possessed in spades.

As dictator Juan Peron Chicago jewel Larry Adams shines, bringing just the right blend of maturity, charisma and skin crawling menace needed to make Peron three dimensional and captivating (not to mention one of the most gorgeous baritone voices in Chicago).

Two other standouts in the cast are David Schlumpf’s wonderfully corny Augustin Magaldi (who I believed was Argentinian). Also in the role of Peron’s mistress Eliza Palasz is a standout and makes us care about her dismal plight as a street prostitute.

And I commend the extremely strong and talented chorus of Evita though small in number provide a sound and size of a massive mob, the result of fine Musical Direction by Marriott’s own Ryan T. Nelson and his stellar orchestra (small orchestra sounding like small orchestras can really mar this show). They provide a sound which is as big as the heroine with a majesty befitting (I also appreciate the fine diction of the cast).

Nancy Missimi’s costumes are first rate (and thanks for having Evita appear in the white ball gown on the balcony!) and resident Scene Designer Thomas M. Ryan’s set is nimble, well designed and captures the grungy grandeur of Argentina (I know from having spent considerable time in Buenos Aires).

If Hannah Corneau could bring more complexity and color to her Evita this show could be a ten. But, as it stands now there are many moment when I want to cry for Argentina.

Evita runs at the Marriott Theatre in Lincolnshire through June 5th. For tickets please call the Marriott box office at 847-634-0200.