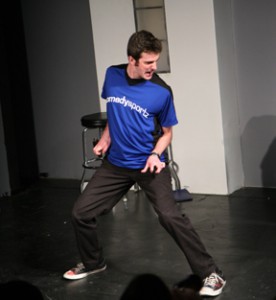 Favorite players of years past will return to The ComedySportz Theatre for its annual Alumni WeekendFriday, August 23 and Saturday, August 24, 2013. Alumni players will play alongside current members of ComedySportz Chicago’s 46-person professional ensemble.

The Alumni Weekend will be the 26th birthday for ComedySportz Chicago, one of Chicago’s longest-running improv comedy theaters. The company began performances in Chicago in 1987 and has called 15 different venues home since settling into its current space at 929 W. Belmont, in Chicago’s Lakeview neighborhood.

Goodhart, Shad Kunkle, Tim Mason, John Schickendanz and Natalie Sullivan Shipman. Together with the current ensemble members who will play in the weekend shows, virtually all eras of the Chicago troupe’s 26-year history will be represented on stage. To view the complete lineups for all alumni shows, click here.

Regular shows (no alumni performers) also to be performed

ComedySportz welcomes back alumni from throughout its 26-year history to play alongside current performers in its Alumni Weekend shows. Guest alumni players will join ComedySportz teams at the theater’s performances onFriday, August 23 at 8 pm. and Saturday, August 3 at 6, 8 & 10 pm. Tickets for these all-age-friendly shows are $22 to $24 and are available through The ComedySportz Theatre Box Office or Ticketmaster.

ABOUT THE COMEDYSPORTZ THEATRE:

Known for its titular show, ComedySportz, The ComedySportz Theatre has been making Chicago laugh since 1987. In summer of 2012, the theater celebrated 25 years as a Chicago institution by hosting the ComedySportz World Championship. Located at 929 W Belmont, The ComedySportz Theatre features the work of both its 50 person professional ensemble and several other teams of young, up-and-coming comedians who share the theater’s mission of “enriching lives and the creative imagination of the human spirit by providing accessible, high quality comedy.”