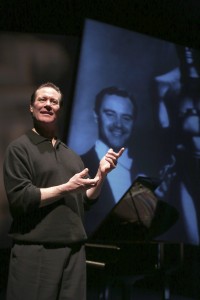 During a film master class I once viewed given by actor Michael Caine, he was asked what differentiates an actor from a movie star.  His answer was “instant likeability” and his one and only example was Jack Lemmon.

After viewing Chris Lemmon’s poignant one man show about his famous pop, Jack Lemmon Returns which opened last night at the Royal George Theatre to a five minute standing ovation, it is now obvious what Caine was describing.

Produced, written and directed by the inimitable Hershey Felder, Jack Lemmon Returns  is not only an homage to one of the world’s finest film actors, but also a brutally honest work as it describes how one man’s addiction almost destroyed a family.   From the moment the audience is seated, we are greeted with four large portraits of Jack in his most iconic of roles.  As son Chris enters the stage dressed all in black and takes his place at the grand piano, he instantly becomes the spitting image of his father as the story of his career highs and lows are brilliantly exposed. 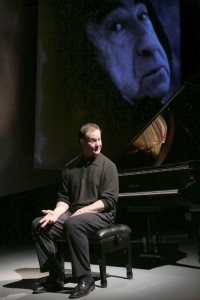 Over the course of a quicly-paced ninety minutes, Chris, as an actor playing his father, goes to some very dark places and truthful places, which cannot be an easy task night after night.  After all, this was his father who wowed us in Mister Roberts, cemented his stardom in Some Like It Hot, became the first to accurately portray the life of an addict in The Days of Wine and Roses, and then take his fame to new heights when he met his on-screen “brother” Walter Matthau in The Odd Couple and  Grumpy Old Men.  But this is the same man whose addiction predicated many of his life’s choices and affected his only son in the most profound ways.

Jack Lemmon Returns also focuses on the film icon’s inspirations,  with none more important than French silent film start Jean-Louis Barrault, who fascinated Lemmon by how he could make someone laugh at one moment then instantly break their heart at the next.  This is what Jack Lemmon aspired to and succeeded.   So too, has his son.