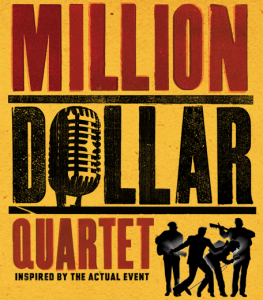 The Chicago production continues to break box office records at the Apollo Theater, 2540 N. Lincoln Ave., Chicago.  Tickets are now on sale through April 28, 2013 at the Apollo box office, phone (773) 935-6100, and online through Ticketmaster, www.ticketmaster.com.   For more information, visit www.milliondollarquartetlive.com.

Producer Gigi Pritzker comments, “It’s a thrill to celebrate our fifth year in Chicago.  Since the beginning, Chicago has embraced Million Dollar Quartet and we are grateful for the continued and enthusiastic support of Chicago audiences.  It’s been a hit in Chicago, New York, London, Japan and on the national tour.  The show remains as fresh, energetic and engaging as always—partially due to the more than 20 rock ‘n’ roll hits in the show and the tremendous talent on stage.”

Brandon Bennett (Elvis Presley) a native of Ponchatoula, Louisiana, has performed with legendary stars like The Jordanaires, DJ Fontana and The Sweet Inspirations. Brandon has been honored with several international awards, including prestigious honors from Elvis Presley Enterprises, Inc.  He joins the cast of MDQ after performing for the past two years with the stage production The Elvis Story in Quebec, Canada.

Lance Lipinsky (Jerry Lee Lewis), a Texas native, grew up studying his dad’s record collection of Elvis, Roy Orbison, and his hero, Jerry Lee Lewis.  These influences never left him and now, at age 24, he combines these styles in his own original music similar to early Rock & Roll, classic Country and even a touch of 1960’s pop.  His energetic live shows have led him all over the world, even to making his national television debut at the original Ryman Grand Ole Opry in Nashville, TN.

Tim Decker (Sam Phillips), a longtime Chicago actor, has appeared at Chicago Shakespeare, Goodman, Next, Milwaukee Rep, Touchstone, Shattered Globe, Stage Left, Famous Door, American Theatre Company, and American Blues (where he received a Principal Actor Jeff Award for his work in Toys in the Attic), among others.

On December 4, 1956, an auspicious twist of fate brought Johnny Cash, Jerry Lee Lewis, Carl Perkins and Elvis Presley together. The place was Sun Records’ storefront studio in Memphis.  The man who made it happen was Sam Phillips, the “Father of Rock ’n’ Roll,” who discovered them all. The four legends-to-be united for the only time in their careers for an impromptu recording that has come to be known as one of the greatest rock jam sessions of all time.

Million Dollar Quartet features a treasure trove of the greatest rock ’n’ roll, gospel, R&B and country hits from these music legends, including “Blue Suede Shoes,” “Fever,” “Sixteen Tons,” “Who Do You Love?,” “Great Balls of Fire,” “Riders in the Sky,” “Whole Lotta’ Shakin’ Goin’ On,” “Folsom Prison Blues,” “I Walk the Line,” and “Hound Dog.”  Million Dollar Quartet captures the infectious spirit, freewheeling excitement and thrilling sounds of a singular moment when four of the music industry’s most extraordinary talents, all in their creative prime, came together for one of the most memorable nights in music history.

Million Dollar Quartet had its world premiere at Florida’s Seaside Music Theatre, and was subsequently staged at the Village Theatre in Washington, breaking box office records.  In Chicago, the production moved to the Apollo on November 5, 2008, following its sold-out, limited engagement at the Goodman’s Owen Theatre.  The Broadway production garnered three Tony Award nominations, including Best Musical, Best Book of a Musical and Best Featured Actor in a Musical, Levi Kreis; three Drama League Award nominations; and an Outer Critics Circle Award nomination.  Million Dollar Quartet is currently playing in New York at New World Stages, London at the Noel Coward Theatre and it recently began a national tour.

Rush student tickets for select performances (Wed-Fri and Sun evenings only) are available 2 hours prior to curtain at the box office with valid Student ID. Student rush tickets are subject to availability.

Million Dollar Quartet will offer special family discounts on select Sundays.  Family nights have extended through the spring and summer of 2012, and are currently scheduled for October 14, November 11, January 13, February 3, March 17 and April 14  at 6:30 p.m.

Million Dollar Quartet is a 90-minute, family-friendly production.  Audience members of all ages are invited to laugh, clap—and even dance—during the show.

Director Eric Schaeffer is the acclaimed co-founder and artistic director of the Signature Theatre in Arlington, VA, where his work has been honored with numerous Helen Hayes Awards including Outstanding Direction.  He directedPutting it Together and Glory Days on Broadway, the first national tour of big, The Musical, and the West End debut ofThe Witches of Eastwick.  He also served as artistic director for the Kennedy Center’s recent Sondheim Celebration.

Floyd Mutrux is also the co-author of the book to Million Dollar Quartet, sharing writing credits with noted Grammy® Award-winning author and music historian Colin Escott.  Mutrux has written, directed or produced numerous films, including the classic biopic of early rock ’n’ roll American Hot Wax, Dick Tracy and Mulholland Falls.  Escott, the author of numerous books including Good Rockin’ Tonight – Sun Records and the Birth of Rock ’n’ Roll, was awarded a Grammy® for producing The Complete Hank Williams, and was nominated for a Grammy for producing B.B. King – King of the Blues.

Musical Director Chuck Mead, with multiple hit records, has stood at the forefront of the alternative country music explosion as founder and lead singer of BR549, the three-time Grammy® Award nominated country band.

Rawlins, dedicated to developing new work for the stage. Current projects include: Snapshots, a new musical with book by David Stern and music and lyrics by Stephen Schwartz, creator of Wicked, Pippin and Godspell; and a new musical version of Dennis The Menace, scheduled to open in Seattle later this year.  Relevant’s sister company, Odd Lot Entertainment, develops and produces outstanding new film properties. Current productions include the feature Rabbit Hole, based on the Pulitzer Prize-winning play by David Lindsay-Abaire, starring Nicole Kidman and Dianne Wiest, and directed by John Cameron Mitchell.  Relevant Theatricals is proud to be part of the producing team that developedMillion Dollar Quartet.

John Cossette Productions (Producer) was founded by John Cossette whose 30 year career in the music industry as an innovative producer of large scale events was legendary.  John produced the Grammy’s, the BET awards, the 1996 Olympic Games in Atlanta and a star-studded concert in Central Park.  He was deeply involved with MusiCares and the EJ Jackson Foundation which helps to feed the homeless in Los Angeles. Under the direction of Rita Cossette the company will continue to develop and produce music related entertainment.