Chicago Slam Works Ensemble Theatre proudly announces its 2016-17 season featuring three World Premieres of original, poetry-forward, interdisciplinary theater at Stage 773, 1225 W. Belmont. New to the season is an expanded schedule including matinees and subscription and flex pass options. Using poetry as a primary medium, Chicago Slam Works Ensemble Theatre uses elements of movement, drama, music, spoken word, and sketch comedy based on a central theme to create a truly unique and unified theater experience. The three performance in the 2016-17 season are written by Chicago Slam Works Ensemble Theatre. J.W. Basilo is the artistic director. The 2016-17 season includes “Just Numbers”, Oct. 7 – Nov. 11, 2016, “Never Mind, It’s Nothing”,Feb. 17 – March 24, 2017 and “Carrier”, May 6 – June 9, 2017. Tickets are $15 – $25 and performances are Fridays at 8:15 p.m. and Saturdays at 2 p.m. For tickets and information visit www.ChicagoSlamWorks.com.“We have hit our stride for creating engaging, poetry-forward performances that tap into the humor and darkness of the human condition,” Basilo said. “And our audiences have responded by requesting more shows. We we have been able to meet the demand for more shows during the runs. We are incredibly proud of our third season. ”

“Just Numbers” explores a day in the life of students taking yet another standardized test. Each has a story to tell and obstacles to overcome as they attempt to receive an education. They represent the urban chorus of the youthful and hopeful, the forgotten faces of Chicago Public Schools. The students deal with frustration and anger as well as the joys of hope in a system designed to thwart it. 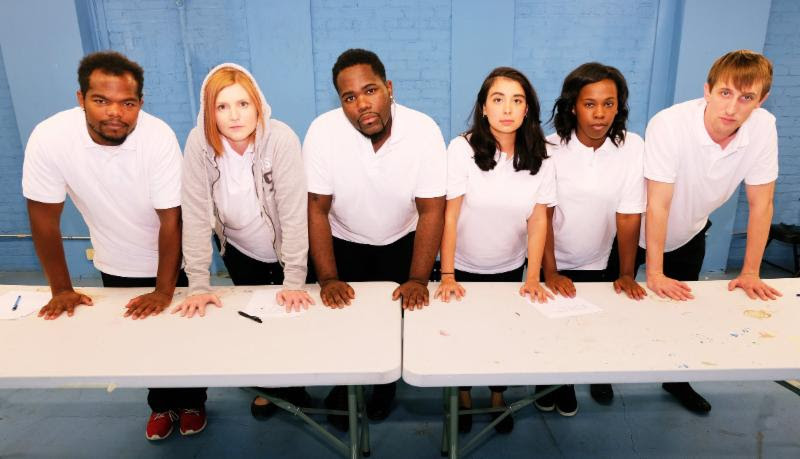 Just in time for the Valentine’s Day hangover, “Never Mind, It’s Nothing” combines performance poetry and theatrical farce to tackle the flawed and funny convergence of desire, longing and the unsaid in love, relationships and of course sex.

The Chicago Slam Works Ensemble Theatre closes out the season exploring the questions of family, inheritance and the legacies we carry – whether we know it or not.

J.W. Basilo (Director) is the Executive Director of Chicago Slam Works and founder and Artistic Director of the CSW Ensemble Theatre. He serves as co-writer and director of the company’s 6 original shows to date. Basilo is also a National and World Poetry Slam finalist, a PushCart Prize Nominee, and a company member with Red Theater Chicago. His work has appeared on NPR, CNN, CBS, WGN, in the Chicago Tribune, NewCity, numerous literary journals, and in hundreds of theaters, dive bars, prisons, schools and comedy clubs across the world. Recently, Basilo was honored by NewCity as one of Chicago’s “Lit 50.” Currently, Basilo co-hosts the world famous Uptown Poetry Slam every Sunday at the Green Mill in Chicago.

Brenda Scott Wlazlo (Heather) holds a BA in Theater from Florida State University and is a graduate of the American Musical and Dramatic Academy’s Musical Theater Conservatory in New York City. Since moving to Chicago in 2013, she’s had the pleasure of working with Red Theater Chicago (Artistic Associate), Oracle Theater, Waltzing Mechanics, Broken Nose Theater, The Chicago Mammals, The Public House Theater, Kentalago Productions and Tympanic Theatre Company. She is graduate of iO’s training program and is a founding member of NYC’s only musical rap improv team, The Boombox Kids.
Jelani Smith (Justise) is a senior BA Acting Major at Columbia College Chicago. She was most recently seen in Columbia College Chicago’s Playwriting Senior Showcase new work, “How to Make Love Out of the Unconditional Grey” and Columbia College Chicago’s production of “Love and Information” directed by John Green. Smith has also performed with The Seldoms Dance Company in their “Power Goes” performance and has received an NAACP Award for Best Ensemble in her Los Angeles performance of “Sarafina!” with the Amazing Grace Conservatory.

Bianca Phipps (Asia) is a recent graduate of the University of Northern Colorado’s School of Theatre Arts and Dance with a B.A. in Acting. Originally from San Antonio, Texas, she is making her Chicago debut with Chicago Slam Works. Previous credits include Graymalkin in “Macbeth”, Lady Bracknell in “The Importance of Being Earnest”, and Echo in “Polaroid Stories”.

Dru Smith (Luke) is an actor, emcee, poet, and beat producer. He has a degree in Theatre Arts from SUNY Purchase and is a graduate of the School at Steppenwolf. Smith has been teaching youth performance and writing since 2009 and is both a House Ensemble member and Teaching Artist for Chicago Slam Works. He has also been seen on stages throughout Chicago in various esteemed shows, including “Othello: The Remix at Chicago Shakespeare Theater”, “TEN” (The Gift Theatre), “Sonnets for an Old Century” (Urban Theatre Company at the Steppenwolf Garage), “Low” (Slingshot Productions), numerous solo performances during the 14 Day Festival at Stage 773.

Christopher Clark (Darius) is an actor, rapper, and singer making his Chicago Slam Works debut. A Chicago native, Christopher has performed on stages all across the city. Most recently, he’s appeared in “PREACH” at the acclaimed Second City.