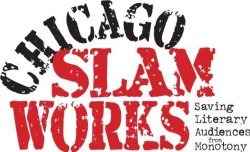 Chicago Slam Works (CSW) proudly announces its 2012-13 season packed with innovative collaborations and dynamic performances at a new location, Raven Theatre, 6157 N. Clark St. The season, directed by Artistic Director J.W. Basilo, features poets and storytellers facing off in “Two Sides”, October 10, 17 and 24, 2012, deceased poets challenging the living in “Dead or Alive” December 5, 12 and 19, 2012, dancers and poets collaborate for “In Motion”, March 13, 20 and 27, 2013 and the season concludes when top German poets join Chicago poets in “In Any Tongue”, August 2 and 3, 2013. All performances are at 7:30 p.m. at the Raven Theatre. Tickets are $14 and free parking is available. For tickets or information visit www.chicagoslamworks.com or call 847-556-8679.

“This is an amazing collection of collaborative poetry events,” said Basilo. “Each of the four events features a unique artform paired with poetry. I think this season showcases how fluid and flexible poetry is, especially slam poetry. These shows are not your grandma’s poetry slam!”

“Dead or Alive Battle Royale of Slam Poetry Supremacy for All Eternity” (“Dead or Alive”) features some of the greatest poets of history from Langston Hughes to Anne Sexton re-joining the living onstage to compete against Chicago’s finest modern poets. Featured poets include Emily Rose and Kevin Kern. “Dead or Alive” runs Wednesday, December 5, December 12 and December 19, 2012.

Dancers from Chicago Danztheatre, Chicago Tap Theater and Dance Crash create original choreography inspired by a unique poem for “In Motion”. In turn, poets ranging from Marty McConnell to Basilo will pen poems inspired by a piece of choreographed dance. The results will be shown simultaneously for “In Motion”, Wednesday, March 13, March 20 and March 27, 2013.

Chicago Slam Works concludes the season with “In Any Tongue”, a unique collaborative performance by the Chicago’s own Speak’Easy Ensemble and Germany’s top poets. American poets will translate and interpret German poems, then present the poems at the same time in both languages through a large-scale, highly choreographed 5 to 8 voice performance. “In Any Tongue” runs Friday August 2 and Saturday, August 3, 2013.

The slam poetry movement began with Marc Smith in Chicago over 25 years ago and has spread, inspiring poets and writers the world over. Chicago’s slam poetry community includes the Slam Alliance which encompasses Chicago Slam Works, the Uptown Poetry Slam and the Encyclopedia Show.

For over 25 years, Marc Smith has hosted the “Uptown Poetry Slam”, where the international slam poetry movement began. This exciting and boisterous evening celebrates poetry and poets – both up-and-coming and established. The “Uptown Poetry Slam” runs every Sundays at 7 p.m. at the Green Mill Jazz Club, 4802 N. Broadway.

The “Encyclopedia Show” is a live variety extravaganza hosted by performance artists Robbie Q. Telfer and Shanny Jean Maney. The show brings artists and experts from many disciplines to use their individual talents to present a different verbal encyclopedia entry each month. The show cultivates accidental knowledge and irreverent loving kindness. The show strives to chafe against logic and proof, find meaning in obfuscation, and wrest truth from fact once and for all. The Encyclopedia Show is performed the first Wednesday of the month at 7:30 p.m. at the Vittum Theater, 1012 N. Noble.

Prior to the first performance of Chicago Slam Works 2012-13 season, patrons may purchase a “Slam Pass”, which includes all four performances as well as tickets to the weekly “Uptown Poetry Slam” and the high-energy monthly “Encyclopedia Show”.

Chicago Slam Works (CSW) is rooted in the Poetry Slam movement, which began in Chicago as a highly entertaining, interactive, innovative poetic experience and spread around the world to become a major force in stirring the minds of students, scholars, and everyday people. The founding members of CSW are pillars of the international movement and the organizational force behind dozens of major poetic events in and around Chicago-as well as the world including three National Poetry Slam Championships.