Chicago Shakespeare Theater welcomes back Ireland’s Druid theatre company—“one of the world’s greatest acting ensembles” (The Guardian)—with its critically acclaimed production of Samuel Beckett’s masterpiece, Waiting for Godot. Staged by Tony Award-winning director Garry Hynes, the production will be presented for a limited engagement in the Courtyard Theater as part of WorldStage at Chicago Shakespeare, May 23–June 3, 2018.

Two friends wait on a bare road in the middle of nowhere for the arrival of the mysterious Godot. To pass the time, they debate life’s great unanswered questions, until two figures appear at dusk. The Irish Times lauds it as “the freshest, funniest and most affecting production of the play in at least a quarter of a century.” 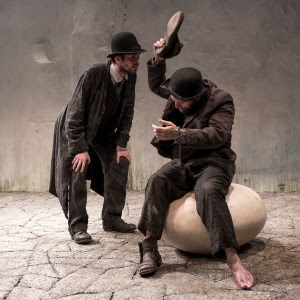 Hailed “the pre-eminent director of Irish drama” by The New York Times, Garry Hynes co-founded Druid theatre company in 1975 and has served as its artistic director for all but three years, while she was the artistic director of Dublin’s Abbey Theatre. A trailblazer, Hynes was the first woman to ever win the Tony Award for Best Direction of a Play—for her premiere production of Martin McDonagh’s debut work The Beauty Queen of Leenane in 1998. Among her many honors, Hynes has garnered the Joe A. Callaway Award for Outstanding Directing, Irish Times Irish Theatre Awards for Best Director, and a Special Tribute Award for her contribution to Irish Theatre.

Internationally recognized as a bold, ground-breaking company, Druid returns to Chicago Shakespeare after previous engagements of The Cripple of Inishmaan (2011) and The Walworth Farce (2009). Through its many successes, Druid has maintained a core group of actors, designers, and production crew who work closely on the company’s acclaimed artistic program, including long-form projects such as DruidSynge and DruidShakespeare.

Waiting for Godot exemplifies Chicago Shakespeare Theater’s commitment to importing the world’s most exciting theatrical events to Chicago and exporting the Theater’s productions to global destinations through WorldStage at Chicago Shakespeare. To date, the program has featured over 1,000 artists from 22 countries spanning five continents—including artists from South Africa, China, India, Belarus, France, Russia, and the UK. Many of the globe’s most iconic troupes have made Chicago their stage, including: The Abbey Theatre from Dublin, Shakespeare’s Globe from London, the Chekhov International Theatre Festival from Moscow, La Comédie Française from Paris, and The Farber Foundry from South Africa.

Waiting for Godot will be presented in Chicago Shakespeare’s Courtyard Theater for a limited engagement, May 23–June 3, 2018. Single tickets are on sale now for $68–$88 (subject to change). Special discounts are available for groups of 10 or more. For more information or to purchase tickets, contact Chicago Shakespeare Theater’s Box Office at 312.595.5600 or visit the Theater’s website at www.chicagoshakes.com.