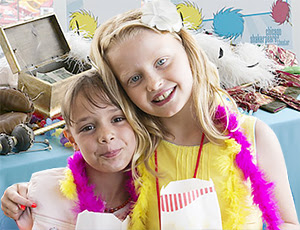 Chicago Shakespeare Theater’s FAMILY GALA 2015 is an exuberant family-friendly event with proceeds directly supporting the Theater’s Access Shakespeare programs, which strive to make performances accessible for all audiences including those with mobility, hearing or vision disabilities, and Chicago Shakespeare in the Parks—a summertime tradition for Chicago that tours a professional Shakespearean production, free for all, to 18 parks across of the city. Proceeds will fully fund an ASL duo-interpreted performance of Shakespeare’s Greatest Hitsthis summer. The 2nd annual event is hosted by the Theater’s Producers’ Guild, a dynamic auxiliary board for emerging leadership in Chicago’s cultural community that advocates and supports CST’s work on the Theater’s stages, in the community and abroad. FAMILY GALA is co-chaired by Producers’ Guild members Karen and Tuey Connell of Lake Forest and Jon and Jen Zindel of Chicago, with the support of Producers’ Guild co-chairs, Rachel Bronson and Justine Jentes.

Event-attendees will first be treated to a performance of Disney’s The Little Mermaid in CST’s magnificent Courtyard Theater. This newly adapted 75-minute production is based on the full-length Broadway musical and staged by Jeff Award-winning director and choreographer Rachel Rockwell. Following the performance, attendees will proceed to a whimsical reception taking place throughout the Theater’s 6th floor lobbies and performance spaces, featuring a delicious luncheon, vivid décor and soaring views of the city’s skyline. Hands-on activities for children of all ages will include stage combat demonstrations by professional fight choreographers, a hip-hop workshop, a photo booth with theatrical props, Disney-themed karaoke, as well as crafts and other games. A raffle with exclusive family-fun packages will further support Chicago Shakespeare in the Parks.