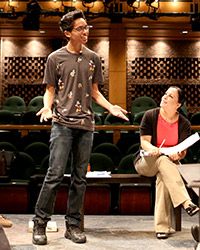 Chicago Shakespeare Theater (CST) presents CPS Shakespeare! Othello, a citywide ensemble of 29 students and teachers from elevenChicago Public Schools (CPS) high schools who develop and stage a fully realized production of William Shakespeare’s Othello on CST’s Courtyard Stage. This innovative program exemplifies CST’s role as a partner in literacy with CPS. Working under the guidance of director of stage and film, Kirsten Kelly, the ensemble members are currently engaged in an intensive five-week rehearsal process led by a team of theater professionals, who include text coaches, designers and a fight choreographer. The participants will use their personal perspectives to interpret Shakespeare’s story of passion, jealousy and the ultimate consequences of vengeance. Performances of CPS Shakespeare! Othello, adapted and directed by Kirsten Kelly, will be presented in Chicago Shakespeare Theater’s Courtyard Theater on Friday, November 1 at 4:30 p.m. and Saturday, November 2 at 10:30 a.m.

Developed by CST Director of Education and Communications Marilyn Halperinand Director Kirsten Kelly, the CPS Shakespeare! program has engaged CPS students and teachers for eight years, featuring productions of Hamlet, The Taming of the Shrew, A Midsummer Night’s Dream, Macbeth and Romeo and Juliet. This year’s CPS Shakespeare!program staff also includes Assistant Director Sandra Shimon, a Prosser Career Academy teacher and English Department Chair, who has participated in the program for the past six years. Assisting CST’s Education staff is high school student alumnus Warren Baskin, a three-time participant who will serve as the CPS Shakespeare! intern. A 2010 graduate of Percy Julian High School in the Washington Heights neighborhood, Warren is now a senior at University of Illinois at Chicago. While a student in the program, Warren appeared in Romeo and Juliet (2007), Macbeth (2008) and A Midsummer Night’s Dream (2009).

On his experience as a participant in CPS Shakespeare!, Warren said, “it is really the only time you get to interact with people of different nationalities. Through the teamwork and the ensemble-building, I formed some great relationships with people who I wouldn’t typically approach on the street …So, it definitely gave me the confidence to know we are all the same. We all share similar experiences. We all get nervous.  I just remember CPS Shakespeare! as a whole was really a life-changing event for me.”

CPS Shakespeare! Othello runs Friday, November 1 at 4:30 p.m. and Saturday, November 2 at 10:30 a.m. in CST’s Courtyard Theater. Each performance is followed by a 30-minute post-show discussion with the entire ensemble, led by CST Director of Education and Communications Marilyn Halperin. Tickets are $5 and may be purchased by calling Chicago Shakespeare Theater’s Box Office at 312.595.5600 or visitinghttp://www.chicagoshakes.com/cpsshakespeare.

ABOUT CHICAGO SHAKESPEARE THEATER
Chicago Shakespeare Theater is one of America’s largest and most celebrated theaters, producing and presenting a year-round season encompassing more than 600 performances at its home on Navy Pier. Its productions are also featured around the globe at the world’s most venerable theaters and festivals, including the Donmar Warehouse, Market Theatre of Johannesburg, Royal Shakespeare Company, Edinburgh Festival Fringe and Grahamstown’s National Arts Festival. Recipient of the Regional Theatre Tony Award, Chicago Shakespeare’s work has been recognized with three of London’s prestigious Laurence Olivier Awards, and by the Chicago theater community with 70 Joseph Jefferson Awards for Artistic Excellence. Under the leadership of Artistic Director Barbara Gaines and Executive Director Criss Henderson, CST is dedicated to producing extraordinary productions of classics, new works and family fare; to unlocking Shakespeare’s work for educators and students; and to serving as Chicago’s cultural ambassador through its World’s Stage Series, an initiative that brings the world’s most exciting theatrical events to Chicago audiences and presents Chicago Shakespeare’s work abroad.

ABOUT CST’S EDUCATION OUTREACH PROGRAMS
Chicago Shakespeare Theater’s year-round producing season features as many as 16 plays and 650 performances with work that engages 200,000 audience members in two intimate theater spaces at CST’s Navy Pier home, in culturally underserved neighborhoods throughout Chicago, in Illinois schools and communities, and across the globe. One in four CST visitors is under the age of 18, an important step in nurturing a lifelong appreciation of the arts and ensuring future audiences for the nation’s great cultural institutions. Annually, CST serves more than 40,000 students and teachers through the theater’s extensive education outreach programs, which include teacher workshops, professional development seminars, performance opportunities for local high school students, professional Shakespeare matinees for student audiences, and a five-week tour each spring to urban, suburban and rural schools throughout the Midwest. CST was bestowed with the Folger Shakespeare Library’s 2012 Shakespeare Steward Award for innovative teaching of Shakespeare in American classrooms and twenty-year partnership with Chicago Public Schools.