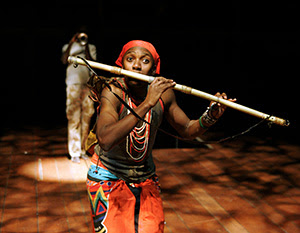 With a score faithfully transposed for an orchestra of marimbas, drums and percussion, thirty actors and musicians fill the stage of The Magic Flute (Impempe Yomlingo) with sheer exuberance, celebrating the spirit of contemporary Africa. This unique interpretation resets the Western operatic classic within a South African township, utilizing traditional elements of South African heritage and various African languages.

This production marks the Chicago debut of South Africa’s Isango Ensemble, founded by Director Mark Dornford-May and Music Director Pauliene Malefane. The company draws its performers from the townships surrounding Cape Town and speaks to a broad multicultural audience. Since its founding in 2000, the company has played to sold-out audiences around the world with numerous productions including A Christmas Carol (Ikrismaskherol), The Mysteries and Aesop’s Fables.

Through its celebrated World’s Stage programming, Chicago Shakespeare has collaborated with more than 700 international artists representing 19 countries on five continents, engaging audiences in a dialogue with the world’s established and emerging theater artists.

The Magic Flute is performed September 25–28, 2014 at Skyline Stage on Navy Pier (next door to Chicago Shakespeare). Tickets are on sale now for $20–$55. Special discounts are available for groups of 10 or more, as well as CST for $20 tickets for patrons under 35. All patrons receive a 40% discount on guaranteed parking in Navy Pier garages. For more information or to purchase tickets or a season subscription, contact Chicago Shakespeare Theater’s Box Office at 312.595.5600 or visit www.chicagoshakes.com.

Chicago Shakespeare Theater (CST) is a leading international theater company and the recipient of the Regional Theatre Tony Award®. Under the leadership of Artistic Director Barbara Gaines and Executive Director Criss Henderson, CST is dedicated to producing extraordinary production of classics, new works and family fare; to unlocking Shakespeare’s work for educators and students; and to serving as Chicago’s cultural ambassador through its World’s Stage Series. Through a year-round season encompassing more than 600 performances, CST attracts 200,000 audience members annually. One in four of its audience members is under eighteen years old, and today its education programs have impacted the learning of over one million students. CST is proud to take an active role in empowering the next generation of literate, engaged cultural champions and creative minds. Visitwww.chicagoshakes.com.