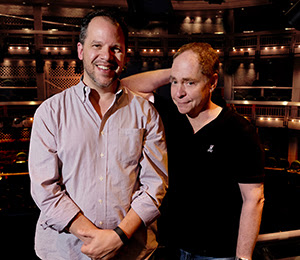 Chicago Shakespeare Theater (CST) announces the full casting and creative team for Shakespeare’s spectacular tale of revenge and romance—The Tempest, staged by award-winning directors Aaron Posner and Teller, of the magic duo Penn & Teller. This inventive reimagining features the music of Tom Waits and Kathleen Brennan, as well as choreography from the pioneering dance troupe Pilobolus led by Associate Artistic Director Matt Kent. One of the final works in Shakespeare’s canon, the play transports audiences to an enchanted island where nothing is quite as it seems. Heralding the celebration of Shakespeare’s four-hundred-year legacy in 2016, The Tempest inaugurates Chicago Shakespeare’s 2015/16 season in the Courtyard Theater, September 8–November 8, 2015.

The mysterious sorcerer Prospero seeks revenge upon his enemies, conjuring a storm to shipwreck them on his magical island. There, he tricks and teases the ship’s unwitting passengers while his daughter Miranda falls in love with the marooned Prince Ferdinand. The lyricism of Shakespeare’s poetry comes to life in this fantastical story of vengeance, love and forgiveness, where sorcery gives way to the inclinations of the heart.

In their Chicago Shakespeare debuts, directors Aaron Posner and Teller come together to create this wholly original staging of The Tempest. Posner, an accomplished playwright and director, has written and adapted nearly 20 plays and directed productions at theaters across the United States, including the Folger Theatre, Milwaukee Repertory Theater, Actor’s Theatre of Louisville and The Alliance. Famed magician Teller is best known as one half of the renowned Penn & Teller, who for nearly 40 years have entertained and amazed audiences with their unique brand of magic and comedy—redefining magic’s place in popular culture. Penn & Teller have one of the most successful and long-running shows in Las Vegas; they have been featured in Emmy-winning television specials and world tours; and they are currently appearing in a highly successful limited run on Broadway.

The ever-versatile Larry Yando tackles the role of the mysterious and vengeful sorcerer Prospero, one of Shakespeare’s most enigmatic characters. He returns to Chicago Shakespeare after his critically acclaimed performance as the title character in King Lear directed by CST Artistic Director Barbara Gaines, a role for which he was recognized as 2014’s “Performer of the Year” by the Wall Street Journal. The Tempest marks Yando’s 24th CST production—a body of work that includes such diverse roles as Malvolio in Twelfth Night, the title role Cymbeline and Casca in Julius Caesar.

Inspired by the early-twentieth-century magician Willard the Wizard, this imaginative staging of Shakespeare’s classic takes place in a traveling tent show of trickery and amazement set in the world of the Dust Bowl. The production is underscored by the soulful songs of Tom Waits who, along with long-time collaborator Kathleen Brennan, provides his signature blues-inspired sounds to the project—performed by a live four-piece band onstage. The Tempest is not Waits’ first time providing the soundscape behind a story; his work in One from the Heart earned him an Academy Award® nomination in 1983. Also featured in the production is choreography by the modern dance collective Pilobolus under the direction of Associate Artistic Director Matt Kent. Featured at the 79th Annual Academy Awards (2007) and in eye-catching performances around the world and on Oprah, 60 Minutes and Sesame Street, Pilobolus is acclaimed for its innovative and collaborative dance vocabulary, which combines athleticism, invention and humor. Pilobolus and Kent have created mesmerizing movements for the two performers who together portray the character of Caliban, bringing new meaning to Shakespeare’s description of Prospero’s strange captive not “honored with human shape.”

Scenic Designer Daniel Conway and Lighting Designer Thom Weaver will construct the mysterious, charmed world of Prospero’s island. Magic Designer Johnny Thompson, an illusionist and comedian in his own right, collaborates with Teller to bring Prospero’s enchantments to life. Paloma Young, who won a Tony Award® for her work in Peter and the Starcatcher on Broadway, serves as Costume Designer for the production with additional costumes by Rachel Laritz. Jeff Award-winner Ray Nardelli returns to Chicago Shakespeare as Sound Designer (Sense and Sensibility, Road Show, Gypsy) and Chicago Shakespeare’s resident Jeff Award-winning Wig and Make-up Designer Melissa Veal completes the creative team.

The role of Prospero’s spirited daughter Miranda is performed by Eva Louise Balistrieri in her Chicago Shakespeare debut. Ferdinand, Prince of Naples, is played by Luigi Sottile. Nate Dendy appears as Ariel, the ethereal sprite bound in servitude to Prospero, while a duo of actors, Manelich Minniefee and Zach Eisenstat partner up to play a twisted and tumbling Caliban. Worldly wisdom is brought to the otherwise madcap world of the play by multiple Jeff Award-Winner Barbara Robertson as Gonzala. Adam Wesley Brown (Trinculo),Lawrence Grimm (Antonio), Michael Aaron Lindner (Sebastian), John Lister (Alonso) and Ron E. Rains(Stephano) return to the Theater after successful runs in numerous productions, ranging from new musicals to Shakespearean classics. Christopher Rose (Minion) makes his CST debut and serves as the production’s Assistant Magic Designer.

For a complete performance listing and more information about the production, visitwww.chicagoshakes.com/tempest.

The Tempest will be performed in CST’s Courtyard Theater September 8–November 8, 2015. Tickets are on sale now for $48-$88 (subject to change), or as part of a subscription beginning at $135. Special discounts are available for groups of 10 or more, as well as CST for $20 tickets available for patrons under 35. All patrons receive a 40% discount on guaranteed parking in Navy Pier garages. For more information or to purchase tickets, contact Chicago Shakespeare Theater’s Box Office at 312.595.5600 or visit the Theater’s website atwww.chicagoshakes.com.
ABOUT CHICAGO SHAKESPEARE THEATER
Chicago Shakespeare Theater (CST) is a leading international theater company and the recipient of the Regional Theatre Tony Award®. Under the leadership of Artistic Director Barbara Gaines and Executive Director Criss Henderson, CST is dedicated to creating extraordinary production of classics, new works and family programming; to unlocking Shakespeare’s work for educators and students; and to serving as Chicago’s cultural ambassador through its World’s Stage Series. Through a year-round season encompassing more than 650 performances, CST attracts 225,000 audience members annually. One in four of its audience members is under eighteen years old, and today its education programs have impacted the learning of over one million students. CST is proud to take an active role in empowering the next generation of literate, engaged cultural champions and creative minds.