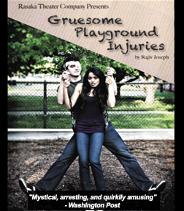 In Rajiv Joseph’s masterful play, an accident prone dare devil and a corrosive masochist navigate friendship, love and the squishy parts that lie in between.  8 year olds Doug and Kayleen meet in a school nurse’s office, beginning a lifelong intimacy which is revealed through the physical and emotional injuries they sustain over 30 years.  Gruesome Playground Injuries tells a different kind of love story through sharp humor and even sharper insights into the human condition.e Company’s Artistic Director Lavina Jadhwani, press opening is Saturday, July 7, 2012 at 8 PM.  For tickets and more information, visit www.rasakatheatre.com.

“Rasaka is delighted to have been granted the rights to the Chicago premiere of this critically-acclaimed new work,” says Jadhwani, “and we’re even more excited to be presenting the play with a multi-racial cast, continuing to underscore our commitment to increasing diversity among our artists and audiences.”

The cast of Rasaka’s production features Chicago actors Mouzam Makkar and Tim Martin.  Makkar, a graduate of the School at Steppenwolf, just finished a run in Sarah Ruhl’s Melancholy Play with Grey Ghost Theatre.  Recent Chicago credits include The Fever Chart: Four Visions of the Middle East (Eclipse Theatre), 1001 (Collaboraction), Here Where It’s Safe (Stage Left Theatre, where she is an Ensemble Member), Twelfth Night (First Folio Theatre), Yoni Ki Baat (Rasaka Theatre), Cut to the Quick: Atom Smashers (the side project), and Seven (Silk Road Theatre). Martin, also a graduate of the School at Steppenwolf, was most recently seen in the touring production of Letters Home with Griffin Theatre.  Other recent Chicago credits include Motion (Signal Ensemble), Lighthousekeeping (New Leaf Theatre), and Wreckage(Caffeine Theatre).  In February 2013, he will be understudying the Chicago premiere of another Rajiv Joseph play, Bengal Tiger in the Baghdad Zoo, at Lookingglass.

Director Lavina Jadhwani is the Artistic Director of Rasaka Theatre Company, where her work includes directing and curating the Chicago premiere of Yoni Ki Baat and the world premiere of culture/clash, the nation’s first fully produced South Asian short play festival. She is an Associate Artist at Silk Road Rising, where she directed Ching Chong Chinaman, Gold Boy, Emerald Girl (in association with the Chicago Public Library), and The Turkey Vulture Other directing credits include work at American Theatre Company, Apple Tree, Bailiwick, Chicago Dramatists, Hubris Productions, Raven Theatre, Remy Bumppo, the side project, Stage Left and Victory Gardens. Lavina is a graduate of Carnegie Mellon University and this fall, she will enter the MFA Directing program at DePaul University.

Gruesome Playground Injuries, which the Washington Post characterized as “mystical, arresting, and quirkily amusing,” has been previously seen in its World Premiere at the Alley Theater, Houston, in 2009, as well as Off-Broadway in 2011 at the Second Stage Theater, starringPablo Schreiber.  Playwright Rajiv Joseph, an American writer whose father immigrated to the United States from India, was a 2010 Pulitzer Prize finalist for his play Bengal Tiger in the Baghdad Zoo. In 2011, Bengal Tiger marked Joseph’s Broadway debut, with a production starring Robin Williams.  In addition to numerous other plays, including 2009 Lucille Lortel nominee Animals out of Paper, he has written for Seasons 3 and 4 of the Showtime series Nurse Jackie.  Of his work, Ben Brantley of the New York Times praised, “Up-and-coming dramatist Rajiv Joseph is an artist of original talent.”

Rasaka Theatre Company is based in Chicago and is the Midwest’s first South Asian American ensemble. Our goal is to increase diversity among artists and audience by engaging and illuminating the South Asian Global experience. We are particularly dedicated to providing a platform for the artistic expression of South Asian artists.

Our vision encompasses the production of theatrical projects – newly created, adapted and already established. We aim to broaden, strengthen and enrich the experience of the theatre going audience thereby enhancing the local, regional, national and international reputation of Chicago theatre.