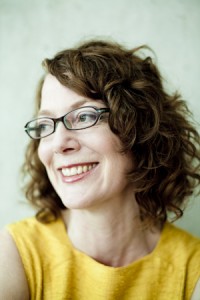 The Chicago Humanities Festival (CHF) is pleased to announce the appointment of Alison Cuddy as its new Program Director. Cuddy, who comes to the Festival after more than 10 years as a producer and reporter with WBEZ 91.5 FM, will begin the full-time staff position May 5, 2014.

“We’re excited to have Alison join our team as we embark on our 25th anniversary this fall,” said CHF Executive Director Phillip Bahar. “Alison will bring a robust set of ideas to our programming. Her background as a journalist, her broad and deep knowledge of arts and culture, and her commitment to the civic life of Chicago will be a boon to the Festival and its audiences.”

Cuddy has been actively participating with the Festival since 2009, serving as a moderator and providing programmatic support. She has contributed to such CHF programs as Mad Men, Mad World; Mohsin Hamid: How to get Filthy Rich in Rising Asia; Reformulating Food; Kimberly Peirce: From Boys Don’t Cry to Carrie; Irene Pepperberg in Conversation and, this past January, the Chicago Humanities Summit, co-presented with The American Academy of Arts and Sciences and the Modern Language Association.

“In my role as moderator, I have experienced firsthand the creativity and professionalism of everyone at the Chicago Humanities Festival, and I’m thrilled to be joining such a talented group,” said Cuddy. “I look forward to working with the team to create programs that enrich public discourse and inspire new and vital ways to convene around shared experiences, just as CHF as done so significantly over the last 25 years.”

In her new role, Cuddy will work closely with Bahar and Artistic Director Matti Bunzl to shape the full range of CHF programs, bringing excitement and vision to the organization.

“Alison is a game-changer,” said Bunzl. “From her work as a producer on WBEZ’s brilliant talk show Odyssey to her deeply informed reporting on Chicago’s arts and culture scene, she has brought remarkable conversations and programs to the city. I can’t wait for her to bring this intellectual energy to the organization!”

Cuddy has been a vital presence on the Chicago scene since joining WBEZ 91.5 FM Chicago Public Media in 2001. She helped launch Odyssey, a successful nationally-syndicated talk show of art and ideas, on which she assembled some of the best minds in the fields of politics, science, culture, law, and the arts. Cuddy also programmed the weekly segment Film Forum Friday, as well as nationally distributed specials on topics such as the role of dissent in democracy and the impact of money on political behavior. She went on to serve as the senior producer of Chicago Matters, the annual multimedia public information series exploring urban topics including immigration, green development, and the global city.

Cuddy rose to prominence in 2007 when she began hosting Eight Forty-Eight, WBEZ’s premier news magazine, covering daily news and current events and analyzing the political, social, and cultural life of Chicago and Illinois. In this role, she brought her keen interviewing skills to conversations with local and national newsmakers, hosted live music events, and anchored special coverage, including national and statewide election programs. Most recently, Cuddy has covered arts and culture at WBEZ. She conceived and produced multimedia content, including podcasts covering media (Changing Channels), the craft beer scene (Strange Brews), and the cultural scene in Chicago and beyond (Weekender with Alison Cuddy).

Originally from Winnipeg, Manitoba, Cuddy moved to Chicago in 1999. She holds as a Masters of Arts in English from the University of Pittsburgh, and a Bachelor of Arts in Cinema Studies from Concordia University, Montreal.

For 25 years, the Chicago Humanities Festival has celebrated the questions that shape and define us as individuals, communities, and cultures. For the intellectually curious, CHF’s vibrant year-round programming and robust Fall Festival offer the opportunity to engage with some of the world’s most brilliant minds. Collaborating with leading arts, cultural, and educational organizations, it presents scholars, artists and architects, thinkers, theologians, and policy makers that change how we see the world, where we’re from, and where we’re going. CHF also presents the spring Stages, Sights & Soundsinternational children’s theater festival. Under the leadership of Executive Director Phillip Bahar and Artistic Director Matti Bunzl, CHF has become an institution central to the fabric of the city. Visit chicagohumanities.org for more information.