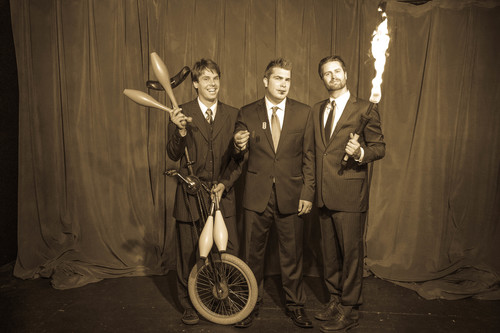 Fire eating, knife juggling, glass walking, impossible escapes, plus illusion and gut wrenching comedy. The modern vaudeville show Danger Circus Company delivers all this and more.  Consisting of an extreme juggler, a mad scientist and a magician, Danger Circus Company deliver just over an hour show designed to catch small halls and colleges on fire with energy.
Recently, the company announced they will be appearing at the Chicago Fringe Festival, an annual gathering of boundary pushing performers and their fans, on Thurs 9/3 @ 7pm, Sat 9/5 @ 10pm, Mon 9/7 @4pm, Thurs 9/10 @ 8:30pm, Sat 9/12 @ 5:30pm.   All shows performed at: Congregational Church of Jefferson Park in the CCJP Gym located on the 3rd floor at: 5320 W Giddings St, Chicago, IL 60630
The response to the news of their appearance has been wildly enthusiastic.
“We couldn’t be more excited about appearing at Chicago Fringe Festival,”  commented Thom, the Mad Scientist of the company.  “It’s just the type of crowd we love most.  Expect us to bring our A-game chainsaw and all.  It’s not a show that should be missed.  We’re putting the ‘fringe’ in the Fringe Festival this year.”

The Danger Circus Company Promo from FreakShow & Tell on Vimeo.

The Chicago Fringe Festival is a group of Chicago-based individual artists and producers who have come together with the common goal of making an annual Festival of extreme fun a reality. Ir’s operated completely by unpaid volunteers, and runs as a non-profit organization.
Tickets for the performances are only $10 each. Buy tickets at www.ChicagoFringe.com or www.DangerCircus.com