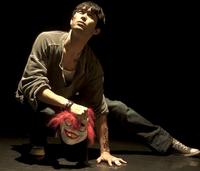 Chicago Dance Crash transforms the DCA Storefront Theater into the dark, dirty, dangerous city of comic book fame, ‘Gotham.’ From sunset to sunrise eight main characters – a young female pickpocket, a dirty cop, a wandering orphan, newlywed tourists, a director, a flamboyant gang-leader and an enigmatic con man – fight to survive in this criminal wasteland. With a breathtaking fusion of dance styles, Gotham’s population of 10 million is brought to life by 30 explosive dancers fluent in classic and contemporary forms in a moving-portrait of one night in the dark life of urban underworld America.

“A story-based dance show with a cast of 30 and a six weekend run is simultaneously daunting, and yet incredibly exciting,” said choreographer Jessica Deahr. “Gotham City is not your typical dance concert. Throughout the two acts, you’ll see a blend of hard core hip hop, capoeira (Brazilian martial arts), straight-edged jazz, and clown-like contemporary, to name a few, performed by an incredibly talented and athletic cast.”

“We have layered intense characters, honest relationships and a gripping story of betrayal and power into the choreography. The audience will truly understand, and be impacted by, where the action is leading them,” added Deahr.

In addition to performing with Chicago Dance Crash as guest artist and company member from 2007 through present, Jessica Deahr has toured North America, South America, Central America, Europe and Asia as dancer and aerial artist with Royal Caribbean Productions, JeanAnn RyanProductions, and Goldberg Entertainment for the USO. She has performed with Inaside Chicago Dance, Instruments of Movement, the Joel Hall Dancers, The MASSIVE, and with independent choreographers such as Harrison McEldowney in Chicago-based company shows as well as in Dance For Life, Jazz Dance World Congress, Spring To Dance, Duets For My Valentine, Chicago Takes Off and Dance Chicago.

Deahr has also performed at various industrials, corporate events, festivals and at the B96 Jingle Bash with Stage Factor, Impulse Talent, the JumpSmokers and Too White Crew. She has set choreography with Chicago Dance Crash, Chicago Tap Theater, Inaside Chicago Dance, Goldberg Entertainment, Dances in the Parks and in Dance Chicago where she received the New Voice Outstanding Choreography award for 2011.