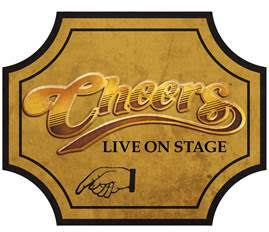 Broadway In Chicago is pleased to announce the classic American sitcom – Cheers – will be brought to life on stage this fall.   CHEERS LIVE ON STAGE will showcase the best and most memorable moments from the first season of the Emmy Award winning hit tv series.

A classic comedy performed in two acts, CHEERS LIVE ON STAGE will feature the interior of the iconic neighborhood bar, where drinking all day is the Norm.  Audiences will laugh along with Carla, Coach, Cliff and Norm, as Sam “Mayday” Malone and Diane “Buzzkill” Chambers meet for the first time, share a first kiss and a first fight!

Cheers, ranked one of TV Guide’s “50 Greatest TV Shows of All Time,” aired for eleven seasons between 1982 and 1993. It regularly garnered top 10 ratings and received 26 Emmy Awards and 4 Golden Globe Awards. The live show adaptation will be brought to life on-stage by Stageworks Media and TROIKA Entertainment.

Group tickets for 10 or more for CHEERS LIVE at the Broadway Playhouse at Water Tower Place are available now by calling Broadway In Chicago Group Sales at (312) 977-1710. Individual tickets for CHEERS LIVE will go on sale at a later date.  For more information, visit www.BroadwayInChicago.com.