Charles Grippo’s “Business and Legal Forms for Theater, Second Edition” Is Essential In Every Way 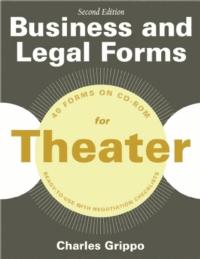 There is an old joke with musical theatre composers when they are asked what comes first, the music or the lyrics.  The answer is neither.  First comes the contract!!!  I have been in the theatre industry for over thirty years now with over a decade experience practicing law and I cannot tell you how incredible Mr. Grippo’s hands-on form book is for both the artist and the producer.

The industry is called show business for a reason and Mr. Grippo’s easy for follow forms (on cd-rom) is a must have for anyone starting a major production to those being asked to perform a simple cabaret show.   Within these forms there are protections for all involved, including the venue.  These are easy to follow and easy to adapt for various specificities.

Mr. Grippo’s book brings the etherial into a common sense terms, making the understanding of the parties into a contractual reality.  Many venues insist on a contract, especially for insurance and liability purposes.  Mr. Grippo’s forms and agreements address all these major issues.  Of course if things get complex or if you don’t understand a term or agreement, it is always the case to ask a licensed attorney in your state for clarification.

Here is a complete, easy-to-use resource for anyone involved in the performing arts! Business and Legal Forms for Theater, Second Edition (Allworth Press) contains forty indispensable, hard-to-find contracts and forms that will save artists and performing groups thousands of dollars in lawyers’ fees, while minimizing their legal risks. Attorney, producer, and playwright Charles Grippo explains the proper use of each form in clear, concise language. No matter which side of the negotiating table you’re on, you’ll find plenty of practical advice to help you obtain the best possible deal. These ready-to-use forms and contracts cover every aspect of theater law, including author agreements, commissions, production license, play publishing, and more. Also included on a convenient CD-ROM, the forms can be copied electronically, modified, customized, and saved.

New to this edition are contracts for performing arts designers; fight and stunt directors; musicians; stage managers and technical directors; front-of-the-house personnel; commissions for original musical compositions; and much more. From producers and directors, to performers and choreographers, to theatrical designers and box office managers, this volume is a necessity for anyone involved in the performing arts.

Charles Grippo is an attorney, producer, playwright, novelist, composer-lyricist, and theatrical investor. He owns Charles Grippo Productions and New Lincoln Theatre Productions. His plays have been produced by theater companies in Chicago, New York, and California. His critically acclaimed two-act farce Sex Marks the Spot was so successful in its Chicago premiere production that it was brought back for a second sold-out production. The author of The Stage Producer’s Business and Legal Guide (Allworth Press), he is a member of the Dramatists Guild and the Authors Guild, and is director emeritus of the Chicago Alliance for Playwrights. He lives in Chicago, Illinois.

Allworth Press publishes business and how-to books for artists, graphic designers, photographers, and interior designers, as well as for filmmakers, performing artists, and authors. In addition, Allworth Press also publishes legal and personal finance guides for the general public. Books from Allworth Press are distributed to the book trade by W. W. Norton and can be found in better bookstores.  Titles may also be ordered directly from the publisher by calling (212) 643-6816 or visiting www.allworth.com.