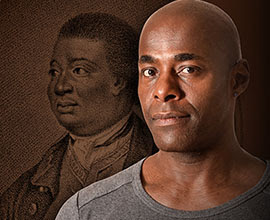 Born on a slave ship but never a slave, Sancho became the first black person of African origin to vote in Britain in 1774. Among his circle of friends was David Garrick, celebrated Shakespeare actor and theater owner. A renowned man of letters, Sancho quoted Shakespeare more than he did any other author in his prodigious writing. As Thomas Gainsborough paints his famous portrait, we are given an insight into the forgotten but true story of an African man who dared to act, write, sing, dance and voice his political opinion with wit and charm. This endlessly revealing, frequently funny one-man show casts a new light on the often-misunderstood narratives of the African-British experience.

The New York Times praises, “a detailed portrait of a man who was an interested witness to the events of his day and who helped, however slightly, to shape them.” UK’s The Public Reviews raves, “Paterson Joseph is a superb storyteller. He brings Sancho to life in a revealing, poignant and funny show.” Afridiziak gives it four stars, declaring “Such is Joseph’s commitment to his role that any trace of the actor evaporates once his waistcoat is donned.”

Paterson Joseph is a leading British actor seen most recently as Brutus in Julius Caesar at the Royal Shakespeare Company, where he has also appeared in Don Juan, Troilus and Cressida, Love’s Labours Lost and King Lear. He appears regularly at the National Theatre in London (Saint Joan, Royal Hunt for the Sun, The Emperor Jones, Elmina’s Kitchen), as well as the Royal Exchange, Gate, Almeida and Young Vic Theatres. Television includes BBC’s The Hollow Crown (PBS), The Leftovers (HBO) and Danny Boyle’s Babylon. Paterson is a season regular in Law and Order UK and Peep Show, he has also appeared in Doctor Who, Hustle and No.1 Ladies Detective Agency (all BBC). Paterson stars as General Arnold Gaines in NBC’s new apocalyptic comedic drama You, Me and the Apocalypse, which also features Rob Lowe, Jenna Fischer and Megan Mullally.

Of the man that inspired the work, Paterson Joseph explained, “Charles Ignatius Sancho is a hero to all black Britons who aspire to be a functioning and integral part of the country of their birth, the country of their adoption. And for all of us, of whatever shade, he shows the way to count our circumstances as given, but not the final word on our destiny.”

Spearheading the yearlong Shakespeare 400 Chicago festival celebrating the playwright’s 400-year legacy in 2016, Chicago Shakespeare Theater (CST) is a leading international theater company and the recipient of the Regional Theatre Tony Award®. Under the leadership of Artistic Director Barbara Gaines and Executive Director Criss Henderson, CST is dedicated to creating extraordinary production of classics, new works and family programming; to unlocking Shakespeare’s work for educators and students; and to serving as Chicago’s cultural ambassador through its World’s Stage Series. Through a year-round season encompassing more than 650 performances, CST attracts 225,000 audience members annually. One in four of its audience members is under eighteen years old, and today its education programs have impacted the learning of over one million students. CST is proud to take an active role in empowering the next generation of literate, engaged cultural champions and creative minds.