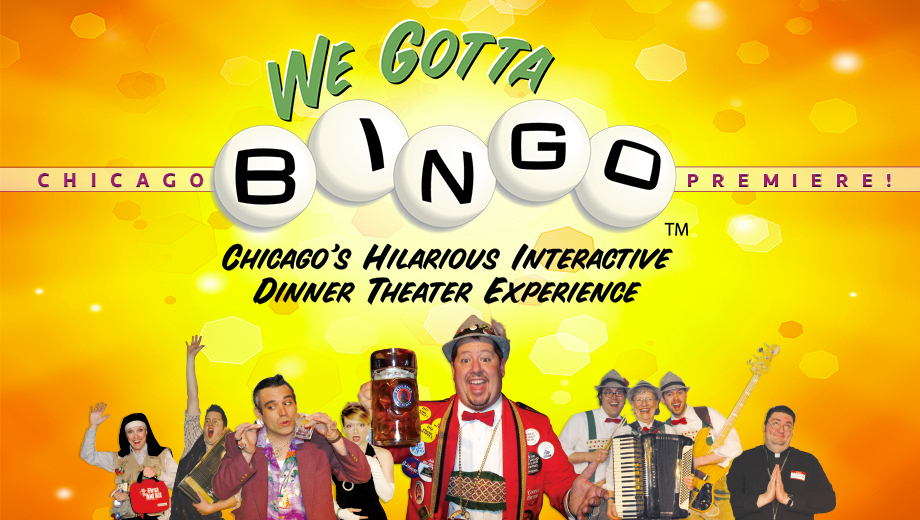 Bill Collins, the producer of the hilarious, interactive dinner theater experience “We Gotta Bingo,” has announced the cast of the production, which will officially open in Chicago Monday, Aug. 3 at 7 p.m. at to the new Chicago Theater Works (1113 W. Belmont). Preview performances begin Thursday, July 23.

In the spirit of “Tony n’ Tina’s Wedding,” “We Gotta Bingo” will treat guests to a night of raucous, interactive, theatrical fun. This exciting new show, directed by Ross Young, allows guests to mix and mingle with a lively cast of characters while eating, drinking and playing bingo all night long!

“We found an incredibly pool of talent in Chicago, and we have found an ideal cast to bring this production to life,” said “We Gotta Bingo” Creator and Producer Bill Collins. “Born and raised in Chicago, it has been a long-time dream of mine to introduce Chicago audiences to the hilarious, wacky cast of characters that were created from my own experiences growing up in the city and going to a catholic school with a mix of Irish and Italian families. This show fits so well into the Chicago culture and we are truly thrilled to be creating this brand new theater space in the Belmont Theater District, where innovative theater is continuously being produced.”

The fun, interactive premise of “We Gotta Bingo” allows audience members to be immersed in a dynamic, riotous show filled with music, comedy and of course, bingo! As guests enter into the German beer hall known as “Der Brew-Ha-Ha,” they are greeted by the lively house polka band as well as the rousing, colorful cast of characters that soon become their dinner dates and bingo partners for the evening. Guests soon learn that they are amongst two rival Chicago parishes, one Italian and one Irish, who are set to merge with one another—against their wishes—and are participating in this bingo bonanza in order to raise money for the imminent union. In between exhilarating games of bingo, all in attendance are treated to an Italian dinner, drinks, dancing, music, mayhem and more.

“We Gotta Bingo” was first presented by the Actors Theater of Minnesota in 2004. Since then, the show has played in various venues throughout the Midwest including Playhouse Square in Cleveland and has delighted more than 100,000 theatergoers of every age. The Star Tribune
hails the show as “a hilarious night of Bingo and Beer. ‘We Gotta Bingo’ is great fun!” The Stillwater Gazette states that “We Gotta Bingo” is “a tremendous play” and Lavender Magazine calls it “a wild affair.”

Bill Collins, Creator and Producer
Bill Collins is the Chief Manager of N-42 Productions, Sole Member and Chief Manager of WGB Creative, LLC, and Creator/Producer/Writer of “We Gotta Bingo.” Collins co-founded Actors Theater of Minnesota in 1999 and serves as its Managing Director and Board Chair. Since then he has produced or co-produced over 50 professional stage productions. He has numerous theatrical, commercial and corporate industrial credits to his name and has also worked as a consultant to NBC television where he took shows from pitch to pilot. He founded and currently is the majority shareholder in a very successful night club and cabaret in Saint Paul, Minnesota; Camp Bar & Cabaret.

About Chicago Theater Works
The new Chicago Theater Works makes its home in the heart of the Belmont Theater District at 1113 W. Belmont. Designed by Obora and Associates with interior design by Matthew Murray, this versatile space will be transformed into a 200-seat German beer hall known as “Der Brew-Ha-Ha.” The space will be a new staple in the Chicago theater scene run by Bill Collins and Michael Dunne.

Performance Schedule and Ticket Information
Preview performances run Thursday, July 23 – Saturday, Aug. 1. The preview schedule is Thursdays, Fridays and Saturdays at 7 p.m. and Sundays at 5 p.m. Preview tickets are priced from $55 – $60 and include a meal and select non-alcoholic beverages.

Tickets can be obtained by visiting wegottabingo.com or by calling 312-391-0404.
Discounted tickets for groups of 16 or more are currently available at GroupTix by calling 773.327.3778 or visiting grouptix.net.