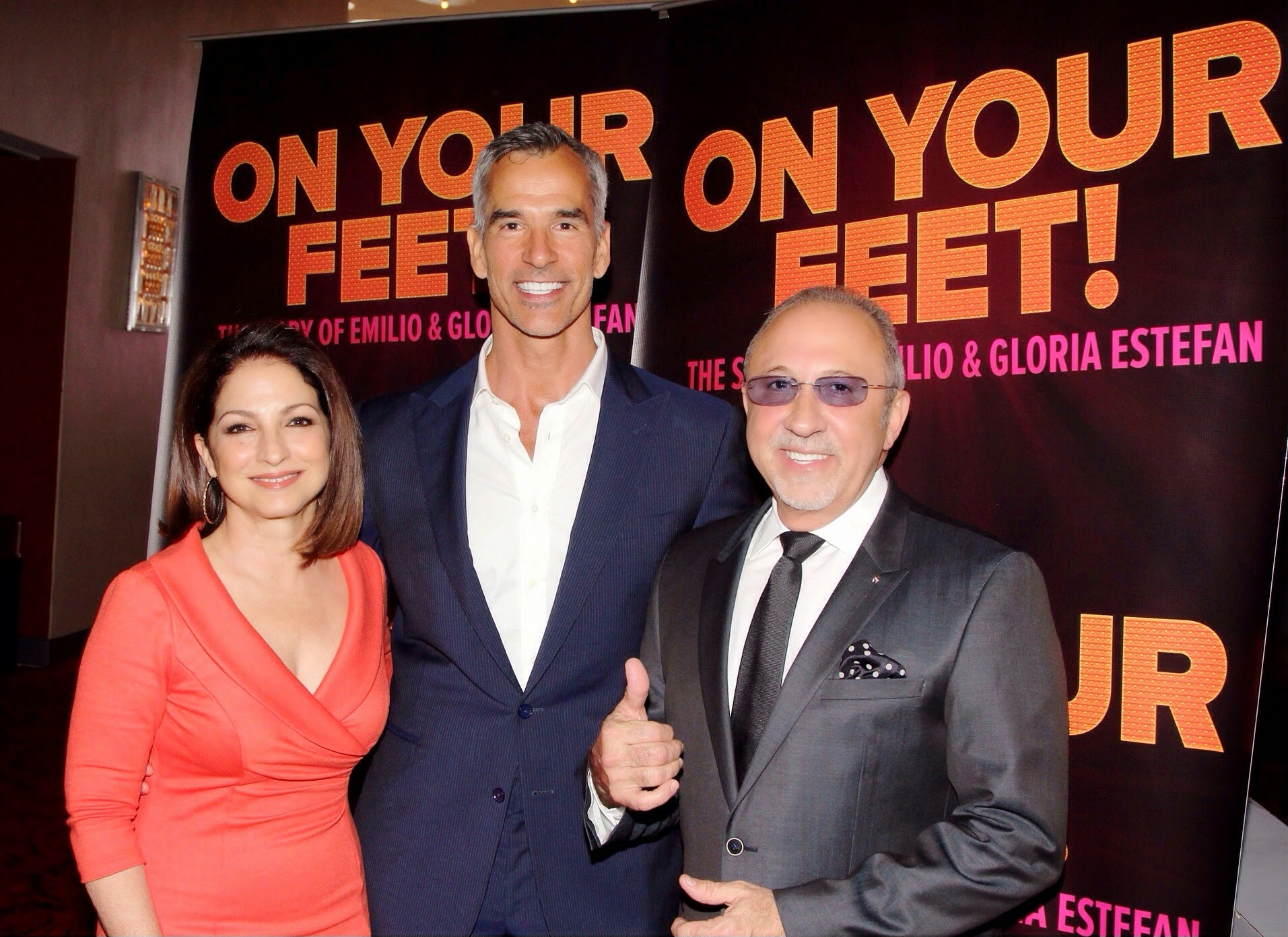 Broadway In Chicago, James L. Nederlander, Estefan Enterprises, Incand Bernie Yuman are pleased to announce that ON YOUR FEET! – a new musical based on the life story of seven-time GRAMMY® winning international superstar Gloria Estefan and her husband, legendary producer-musician-entrepreneur Emilio Estefan – will have its five-week Pre-Broadway World Premiere engagement at Chicago’s Oriental Theatre (24 W Randolph) from June 2 – July 5, 2015. The musical is directed by two-time Tony Award® winner Jerry Mitchell (Kinky Boots, Hairspray).Ticket Information
ON YOUR FEET! will be part of the Broadway In Chicago series, on sale to new subscribers September 7.  Current subscribers can renew now.  Group tickets for 10 or more are now on sale by calling Broadway In Chicago Group Sales at (312) 977-1710.  Individual tickets for ON YOUR FEET! will go on sale at a later date.  For more information, visit www.BroadwayInChicago.com.Today, the production launches an international casting search, Reach Gloria (#ReachGloria) which offers performers around the world a chance to audition for all roles in the Broadway cast of ON YOUR FEET! by submitting audition videos online at www.OnYourFeetMusical.com.  The production will also host two OPEN CASTING CALLS next month – one at Adrienne Arsht Center for the Performing Arts in the Estefans’ home city of Miami, Florida on Sunday September 21, 2014, and another at Pearl Studiosin New York City on Tuesday, September 9, 2014. The open casting calls will be led by members of the show’s creative team, and casting director Justin Huff, CSA of Telsey + Co.

“Finding the right performers to tell our story on the Broadway stage is the most important step in this project,” said Gloria Estefan. “Our own journey together started in Miami, a city that has been such an inspiration to us both, and it only felt right that the city be a cornerstone of our search for the next generation of bright talent.”

Emilio continued, “ON YOUR FEET! is a piece that speaks to people of every culture around the world.  We’ve seen audiences from South America to Asia, and everywhere in between, be moved by our music and we want each and every one of them to have a chance to be a part of this story and show their talent to the world.”

ON YOUR FEET! is the story of two people who—through an unwavering dedication to one another and their pursuit of the American dream—showcased their talent, their music and their heritage to the world in a remarkable rise to global superstardom.  Set to Gloria’s chart-topping, smash hits such as “Rhythm Is Gonna Get You, “1-2-3,” “Mi Tierra,” and “Conga,” in addition to new music penned by the Estefans, the show will bring a new sound to Broadway and get audiences on their feet. ON YOUR FEET! will be choreographed by four-time Drama Desk nominee Sergio Trujillo (Jersey Boys, Memphis) with a book by two-time Drama Desk nominee Alexander Dinelaris (The Bodyguard Musical, Zanna Don’t).

ON YOUR FEET! is produced by James L. Nederlander and Estefan Enterprises, Inc. in partnership with Bernie Yuman.  Now celebrating its 100th anniversary, the Nederlander Organization, led by James L. Nederlander, President, continues the tradition of operating historic theatres, as well as producing and presenting the best in theatrical entertainment and concert events.  Bernie Yuman, an illustrious figure in the entertainment industry and long-time friend and business associate of the Estefans, will serve as Executive Producer. Yuman produced and managed Siegfried & Roy, one of the most successful and longest running shows in Las Vegas history.

BIOGRAPHIES:
With seven Grammy Awards and over 100 million albums sold worldwide, GLORIA ESTEFAN is the most successful Latin crossover performer in the history of pop music. In addition to her chart-topping hit songs “Conga,” “The Rhythm is Going To Get You” and “1, 2, 3,” among others, Gloria recorded the Oscar-nominated song “Music Of My Heart,” and has received numerous honors and awards over the course of her illustrious career. She has been presented with a star on the Hollywood Walk of Fame, inducted into the Songwriters Hall of Fame, named BMI Songwriter of the Year, and received an American Music Award for Lifetime Achievement, an MTV Video Music Award, two ACE Awards, and multiple Billboard Awards for her many chart-topping hits. Gloria has also been honored with the Ellis Island Congressional Medal of Honor (the highest award that can be given to a naturalized U.S. citizen), the Hispanic Heritage Award, and the National Music Foundation’s Humanitarian of the Year Award.

EMILIO ESTEFAN is a world-renowned music, television and film producer who has been instrumental in shaping, developing and directing the careers of his superstar wife, Gloria, as well as Shakira, Ricky Martin, Jennifer Lopez, Marc Anthony and Jon Secada among many others. With a resume that includes over 30 Grammy nominations and 19 Grammy Awards, Emilio has experimented and pushed the envelope of blending Latin, pop and world rhythms creating a unique style and personality that has created chart-topping worldwide hits. It is this vision that transcends the music field and spills over into film, television, hotels and restaurants, among other business endeavors including being the first Cuban-born couple to own a minority stake in the Miami Dolphins, a major NFL Franchise.

JERRY MITCHELL received the Tony Award in recognition of his choreography for the 2013 Tony Award-winning Best Musical, Kinky Boots, for which his direction was also recognized with a Tony nomination. In the 33 preceding years, Jerry has been involved with over 50 Broadway, Off-Broadway, West End and touring productions. His Broadway debut as a choreographer, You’re A Good Man, Charlie Brown, was followed by The Full Monty (Tony nomination), The Rocky Horror Show, Hairspray(Tony nomination), Gypsy, Never Gonna Dance (Tony nomination), Dirty Rotten Scoundrels (Tony nomination), La Cage Aux Folles (Tony Award), Imaginary Friends, Legally Blonde (Tony nomination), which he also directed, and Catch Me If You Can. Most recently, Jerry received the Drama League’s Founders’ Award for Excellence in Directing and the George Abbott Lifetime Achievement Award from his peers. Twenty-three years ago, Jerry conceived and created Broadway Bares, a comedy burlesque show performed annually for the charity Broadway Cares/Equity Fights AIDS. He continues to serve as Executive Producer of Broadway Bares, with a book, website and satellite productions in Fire Island Pines, Las Vegas (Peepshow, in a five year run) and London (West End Bares).

SERGIO TRUJILLO is an internationally-recognized choreographer whose work has been seen all across North America, Europe and Asia. In 2011, Mr. Trujillo had the honor of having four shows simultaneously running on Broadway: Tony Award® winning Best Musical Memphis (OCC Award, Astaire, Drama Desk Award noms.), Tony and Olivier Award® winning Best Musical Jersey Boys (Olivier, Drama Desk, Dora, OCC Award nominations), The Addams Family and the Pulitzer Prize-winning musical Next to Normal (Lucille Lortel Award nomination). Additional Broadway credits include Hands On A Hardbody, Leap of Faith (Drama Desk, Astaire nominations), All Shook Up and Guys and Dolls(Astaire Award nomination). In 2010, he made his debut as a director with the rock musical White Noiseat Chicago’s Royal George Theater, and directed and choreographed Flashdance: The Musical, currently on national tour. His Off-Broadway work includes Saved (Lucille Lortel nom.), The Capeman, Romeo & Juliet (Public), A Tree Grows in Brooklyn and Kismet (Encores!). His international credits include Disney’s Tarzan (World Theatre Award nom.), West Side Story, The Sound of Music (Stratford) and Peggy Sue Got Married (West End). In 2012, Mr. Trujillo was chosen by the Colombian government as one of the top 100 Colombians in the world.

ALEXANDER DINELARIS is currently represented in London’s West End by the hit musical production ofThe Bodyguard at the Adelphi Theatre. Other recent works include his plays Red Dog Howls (New York Theater Workshop), Still Life (Manhattan Class Company), In This, Our Time (59e59) and The Chaos Theories (Shotgun Theater).  Alexander was nominated for two Drama Desk Awards for his work on the additional book and lyrics of the Off-Broadway hit, Zanna Don’t!  Alex has recently written the screenplay for Birdman, the latest film by Academy Award nominated director Alejandro González-Iñarrítu, as well as the original screenplay The Year of the Monarchs.  Dinelaris is also currently writing and co-producing a new dramatic television series with Mr. Iñarrítu entitled, “The One Percent”.  Alex attended Barry University, where he was the winner of the Mac McKindree Scholarship for theatre.  Mr. Dinelaris is a member of the Writer’s Guild, the Dramatists Guild and NYTW’s Usual Suspects.