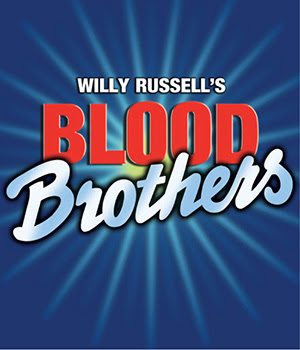 Theo Ubique Cabaret Theatre Artistic Director and Co-Founder Fred Anzevino has announced the cast for Blood Brothers, the megahit British musical by Willy Russell that will open the company’s 2015-16 season, The musical drama is the story of twin brothers separated at birth – one raised by a rich family, the other by the impoverished birth mother of the boys. In the leading role of the boys’ mother, Mrs. Johnstone, will be Kyrie Anderson. Her sons Mickey (the son she kept) and Edward (the son adopted by a wealthy couple) will be played by Charlie Mann and Cody Jolly, respectively. Victoria Oliver and Darren Hill have been cast as Mr. and Mrs. Lyons, the couple who adopt Edward. Dana Anderson will play Linda, the romantic interest of both brothers, and Cullen Rogers will be the criminally inclined Sammy. Jordan Phelps has the role of The Narrator and Whitney Rappana, Ryan Dooley and Ryan Armstrong will comprise the ensemble.
The musical ran an amazing 24 years in London’s West End. Anzevino will direct the production, with Resident Music Director Jeremy Ramey providing musical direction. Maggie Portman will choreograph. Also on the production team are Adam Veness (scenic design), Bill Morey (costume design), Maya Fein (lighting deisgn), Adam Goldstein (dialect coach) and Mary Catherine Mikalayuas (stage manager). Season tickets for the 2015-16 season are currently on sale. Single show seats will go on sale soon.

All performances will be held at the No Exit Café located at 6970 N Glenwood Ave. Thursdays at 7:30 PM, Fridays and Saturdays at 8:00 PM, Sundays at 7:00 PM
Previews: Friday, September 25 through Monday, September 28, all seats $20.00
Regular run: Thursdays and Sundays $34.00, Fridays and Saturdays $39.00.
$5.00 discount for students and seniors.
Dinner available with advance reservations for $25.00 additional per person.

Student Rush All Season Long! (All unsold tickets are $15 at the door with college ID. Tickets will be sold on site, cash only, at curtain. First come, first served, subject to availability.)

Theo Ubique began producing in 1997, first at the Heartland Studio Theatre, and then in 2004, at Michael James’s No Exit Café, where it began focusing on musicals and revues, reigniting the cabaret theatre trend in Chicago. Since then, Theo Ubique has produced more than 50 shows and received more than 40 Jeff Awards, having received more than 100 nominations. It has also received three After Dark Awards.