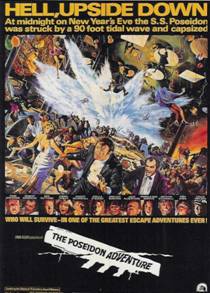 In the iconic 1972 action-disaster epic The Poseidon Adventure, a luxury ocean liner overturns at midnight on New Year’s Eve. This December 31, 2012, on the 40th anniversary of The Poseidon Adventure, Camp Midnight and the Music Box Theatre resuscitate New Year’s Eve on the S.S. Poseidon, a campy celebration set against the backdrop of the seminal disaster movie. The SS Poseidon’s departure is precisely timed so that the onscreen New Year’s Eve toast and simultaneous catastrophe synchronize with the real stroke of midnight in Chicago. The Music Box Theatre presents the fifth annual New Year’s on the S.S. Poseidon Monday, December 31, 11pm at the Music Box Theatre, 3733 N. Southport Avenue. www.musicboxtheatre.com/events/poseidon-adventure-2012-12-31-1100-pm

“Passengers” are invited to don their best ’70s cruisewear from the secondhand store and grab their deck chairs at 11pm for a Camp Midnight pre-show hosted by Captain Dick O’Day and staffed by the hearty crew of Hell in a Handbag Productions. There will be a costume competition with prizes as voted on by the audience before the screening of The Poseidon Adventure, timed so that theater patrons and their celluloid counterparts will celebrate midnight at the exact same time. Audience members receive an interactive guide, while Camp Midnight provides hilarious running commentary throughout the film. The screening will also feature original bonus material created by Hell in a Handbag Productions.

“For five years as the captain of Camp Midnight aboard the S.S. Poseidon, I’ve safely guided the huddled masses trapped beneath the ocean waves yearning to climb that plastic Christmas tree (in just panties, what else do I need?),” enthuses Dick O’Day. “I’ve taught loyal fans to swim alongside Shelley Winters, gape in wonder at the inaudible song stylings of Carol Lynley, luxuriate in the scenery chewing of Ernest Borgnine and at long last reach the propeller shaft at the conclusion of Irwin Allen’s camptacular disaster epic. I am happy to report that we have not lost a single camp film fan in all that time.”

Irwin Allen’s The Poseidon Adventure (1972) is set aboard the grand old SS Poseidon on her final voyage from New York City to Athens. The passengers and crew ring in the New Year in the grand ballroom when the Poseidon is struck by a 90-foot tsunami.  As the upside-down ship takes on water, the formally attired survivors try to make their way up to the hull and escape to safety before the ship completely sinks. The all-star cast includes Gene Hackman, Shelley Winters, Carol Lynley, Ernest Borgnine, Stella Stevens, Jack Albertson, Red Buttons, Pamela Sue Martin and Alex Karras. Released in December 1972, The Poseidon Adventurewent on to become the top-grossing movie of 1973, winning Academy Awards for Visual Effects and Original Song (Maureen McGovern’s “The Morning After”). It inspired a wave of disaster epics, from The Towering Inferno to Earthquake.

Admission – $23 in advance  at the Music Box Theatre box office or online at www.musicboxtheatre.com/events/poseidon-adventure-2012-12-31-1100-pm – or $28 at the door. Price includes a complimentary champagne toast, drink ticket and party favors. ’70s cruisewear encouraged! The Music Box Theatre will remain open until 2am for post-show festivities!