Broadway Stars Come to Orlando for “From Broadway with Love” Benefit at Dr. Phillips Center July 25

Following the events that took place at Pulse nightclub on June 12, 2016, the Broadway and Orlando theatre communities will unite to perform From Broadway with Love: A Benefit Concert for Orlando – a healing night of music and dance to honor the 49 victims – on Monday, July 25, 2016 at 7:30 p.m in the Walt Disney Theater at the Dr. Phillips Center for the performing Arts. Tickets will go on sale to the general public Friday, July 8, 2016 at 10 a.m. Tickets range from $20 – $40 and may be purchased online at www.drphillipscenter.org, by calling 844.513.2014 or by visiting the Dr. Phillips Center Box Office at 445 S. Magnolia Avenue, Orlando, FL 32801 between 10 a.m. and 4 p.m. Monday through Friday, or between 12 p.m. and 4 p.m. Saturday. Online and phone ticket purchases include handling fees.

Net proceeds raised from the performance (royalties and artist fees waived) by From Broadway With Love: A Benefit Concert For Orlando will be donated equally between the GLBT Community Center of Central Florida, Hope and Help Center of Central Florida and Zebra Coalition. A forthcoming CD and DVD of the concert will also be available at www.BroadwayRecords.com, Amazon.com and more, with 100 percent of profits benefitting the three designated non-profit organizations. Visitwww.frombroadwaywithlove.org to sign up to be notified when the CD and DVD become available. 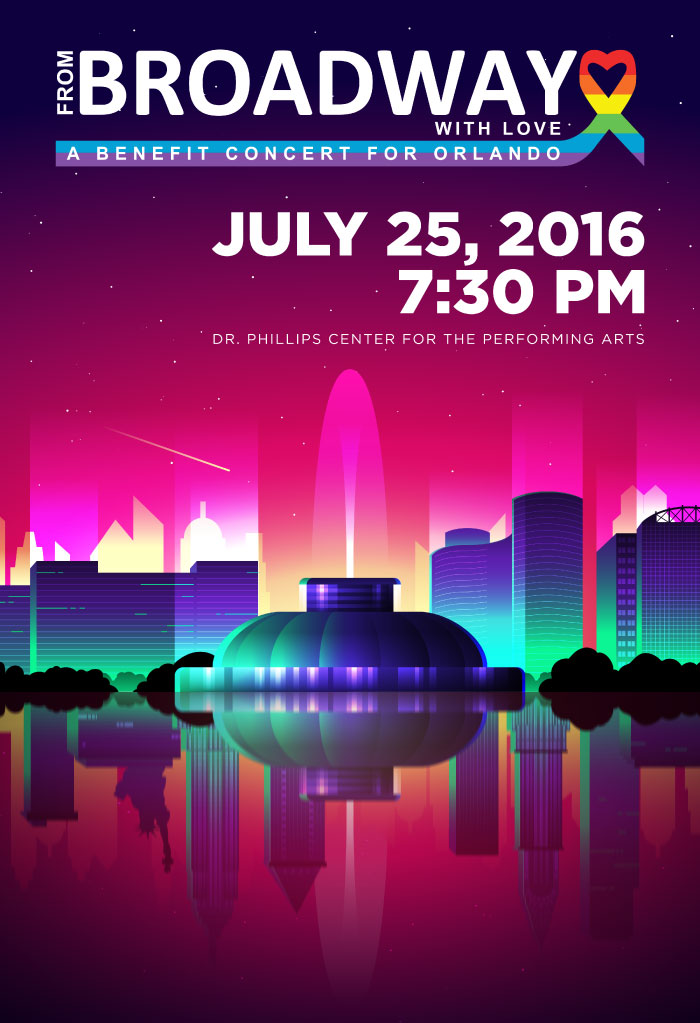 Many of the artists participating in From Broadway With Love: A Benefit Concert For Orlando gathered at Avatar Studios on Wednesday, June 15, 2016, in New York City for a benefit recording of the iconic 1965 song “What the World Needs Now is Love” as part of the Broadway for Orlando charitable initiative. The record reached No. 1 on the iTunes song chart in its first week and broke into the Billboard Top 100 with no commercial radio play.

From Broadway With Love: A Benefit Concert for Orlando is created by Seth Rudetsky, Kenny Howard and James Wesley; directed by Kenny Howard; written by Michael Wanzie with musical direction by Michael J. Moritz, Jr.