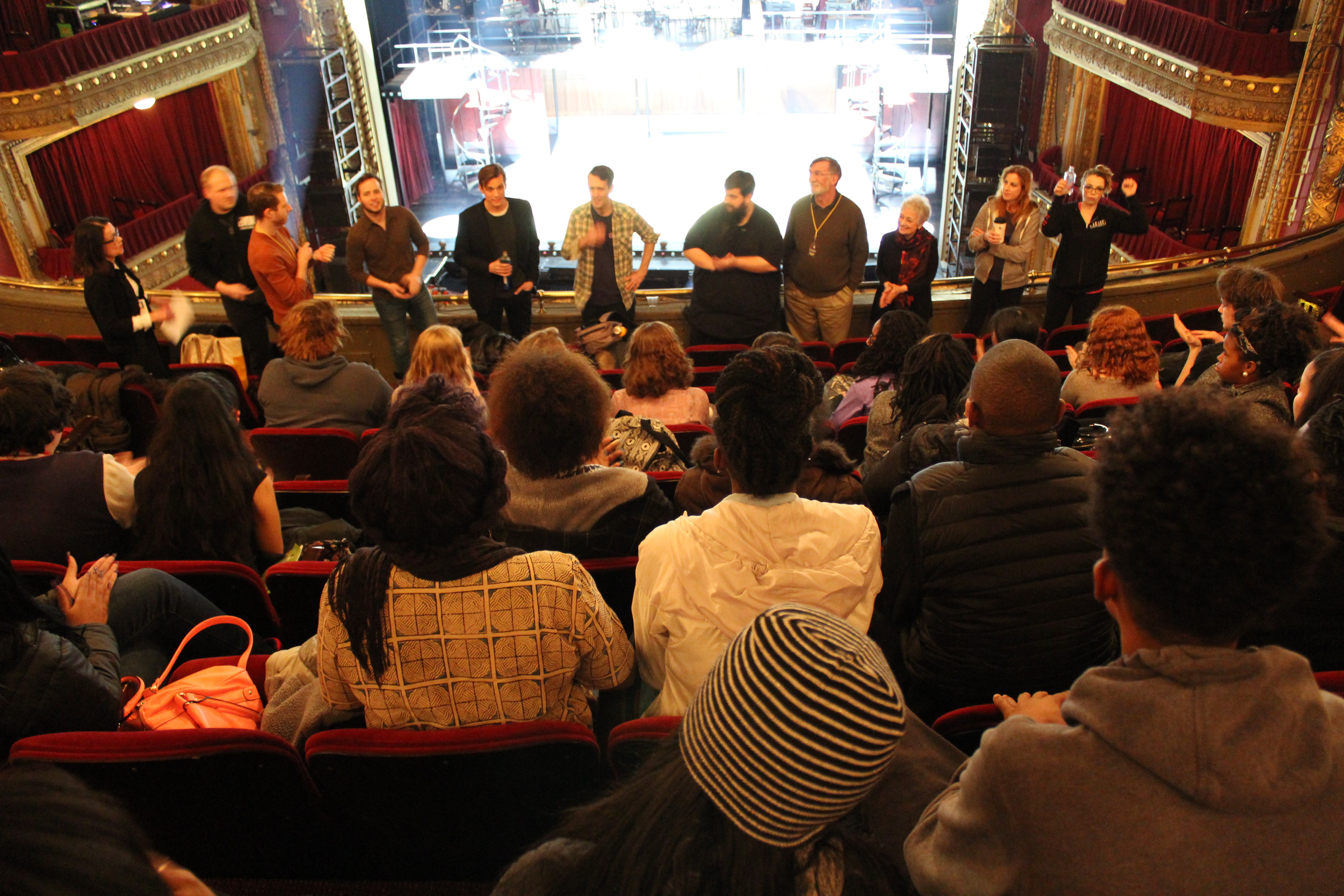 Broadway In Chicago and The PrivateBank hosted an educational post-show Q&A discussion with cast members from the production of Roundabout Theatre Company’s CABARET following the Wednesday, February 17, matinee performance for local Chicago students from Gage Park High School to engage and enrich their overall theater experience from an onstage and behind-the-scenes perspective.  The post-show discussion was sponsored by The PrivateBank.

“We are committed and excited to be bringing the theatre experience to students throughout Chicago.  Through this unique educational program we have structured together, we will give hundreds of students each year an inside view of life in the theatre and an opportunity to experience one of the amazing Broadway In Chicago productions,” said Larry D. Richman, President and Chief Executive Officer of The PrivateBank.

Roundabout Theatre Company’s CABARET is currently playing Broadway In Chicago’s newly named The PrivateBank Theatre through February 21, 2016.  Direct from Broadway, the acclaimed masterpiece returns to Chicago! As part of their 50th Anniversary Season, the critically acclaimed and award-winning Roundabout Theatre Company is proud to present SAM MENDES (Skyfall, American Beauty) and ROB MARSHALL’S (Into the Woods and Chicago, the films) Tony Award®-winning production of CABARET. Come hear some of the most memorable songs in theatre history, including “Cabaret,” “Willkommen” and “Maybe This Time.”  Leave your troubles outside – life is beautiful atCABARET, JOHN KANDER, FRED EBB and JOE MASTEROFF’s Tony-winning musical about following your heart while the world loses its way.

Roundabout Theatre Company was most recently represented across the country with the critically acclaimed, multi-award-winning national tour of Anything Goes starring Rachel York which toured for 48 weeks.  Before that, Twelve Angry Men toured for 2 years, spending 63 weeks across the United States and Canada. Roundabout’s longest-running musical, the revival of Cabaret, received a multi-year tour across the country beginning in 1999. In 2011, Roundabout Theatre Company’s acclaimed work reached a worldwide cinema audience with the HD capture and broadcast of their Tony nominated production of The Importance of Being Earnest, starring Brian Bedford.

Roundabout Theatre Company’s 50th Anniversary Season celebrates the company’s numerous accomplishments and vision for the future with bold new productions of classic plays, a revival of the Roundabout’s first musical, and new work by some of the country’s most exciting young talent. Founded in 1965, Roundabout Theatre Company has grown from a small 150-seat theatre in a converted Chelsea supermarket basement to become one of the nation’s most influential not-for-profit theatre companies, as well as one of New York City’s leading cultural institutions. Roundabout has been recognized with 29 Tonys, 41 Drama Desks, 50 Outer Critics Circle, 10 Obie and 15 Lucille Lortel Awards for its work on five stages, reaching more than 700,000 theatergoers and employing hundreds of artists each year. Bank of America is a proud 50th Anniversary Season sponsor – a partnership that makes possible Roundabout’s many productions and not-for-profit initiatives during this landmark year.

The PrivateBank is proud to help make our city more vibrant through partnerships with organizations such as Broadway In Chicago. At The PrivateBank, our mission is to advance the goals of our clients by delivering compelling commercial, personal and private banking solutions as well as to promote the stability of our communities through financial literacy and banking services.  The PrivateBank is part of PrivateBancorp, Inc., a Chicago-based company with $17.3 billion in assets as of December 31, 2015.