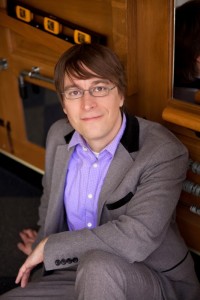 Broadway In Chicago and Emerald City Theatre are thrilled to announce the World Premiere of HANSEL & GRETEL: A WICKEDLY DELICIOUS MUSICAL TREAT, with music and lyrics by GRAMMY-nominated Justin Roberts and a book by Emerald City Theatre Artistic Director Ernie Nolan.  The classic story of Hansel & Gretel reimagined as a rock musical for all ages will play the Broadway Playhouse at Water Tower Place (175 E. Chestnut) November 22, 2014 through January 4, 2015.

Fairy tales ROCK, especially this story featuring the fearless sibling duo of Gretel and Hansel!  Still reeling from the disappearance of their mother and classmates, Hansel believes with all of his heart that he’s found a way to rescue them deep within The Forbidden Forest.  Doubtful, the streetwise Gretel follows in pursuit of her dreamer brother.

When they come across a candy house, their bond and beliefs are put to the test until love saves the day.  This story is brought to musical life through the talents of The Grimm Brothers Band performing a live rock and roll score.  Nationally produced playwright Ernie Nolan teams up with GRAMMY -nominated ‘kindie’ artist Justin Roberts to create a wickedly delicious musical treat for the entire family.

Chicagoan Justin Roberts is one of America’s top children’s recording artists.  He performs more than 150 family concerts each year around the nation.  With a sound that’s more akin to Fountains of Wayne than Romper Room, Roberts blends his deft indie-pop sensibilities with a keen understanding of what it’s like to be a kid. He’s been variously compared to Elvis Costello, Nick Lowe, Weezer and Loudon Wainwright.  Music critics from theWashington Post to Salon.com are invariably surprised at the musical sophistication and lyrical depth of the songwriting.  WXPN Radio’s Kathy O’Connell was quoted in USA Today, calling Roberts “the Paul McCartney of children’s music.”

Broadway In Chicago was created in July 2000 and over the past 14 years has grown to be one of the largest commercial touring homes in the country.  A Nederlander Presentation, Broadway In Chicago lights up the Chicago Theater District entertaining well up to 1.7 million people annually in five theatres. Broadway In Chicago presents a full range of entertainment, including musicals and plays, on the stages of five of the finest theatres in Chicago’s Loop including the Bank of America Theatre, Oriental Theatre, Cadillac Palace Theatre, the Auditorium Theatre of Roosevelt University and just off the Magnificent Mile, the Broadway Playhouse at Water Tower Place.

Founded in 1996, Emerald City Theatre creates theatre experiences that inspire early learners through play. Emerald City is one of Chicago’s most attended non‐profit theatres, with an annual programing reach of 80,000. Through a rigorous collaboration between innovating artists and leading teaching artists, Emerald City develops new work for young audiences, with over 29 world premieres.  The company produces professional productions at the Apollo Theater in Lincoln Park, The Broadway Playhouse at Water Tower Place, and the Little Theatre.  The Emerald City Theatre School serves over 3,000 children annually in schools throughout Chicago.