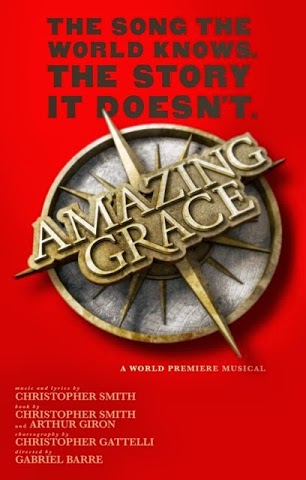 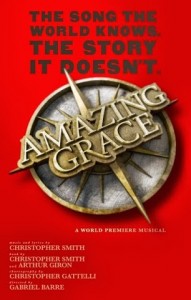 AMAZING GRACE is a world premiere musical based on the awe-inspiring true story behind the world’s most beloved song.  A captivating tale of romance, rebellion and redemption, this radiant production follows one man whose incredible journey ignited a historic wave of change.

John Newton (Josh Young), a willful and musically talented young Englishman, faces a future as uncertain as the turning tide. Coming of age as Britain sits atop an international empire of slavery, he finds himself torn between following in the footsteps of his father – a slave trader – and embracing the more compassionate views of his childhood sweetheart. But when a perilous voyage on the high seas finds John in his darkest hour, a transformative moment of self-reckoning inspires a blazing anthem of hope that will finally guide him home.

Brimming with emotion and adventure, AMAZING GRACE is an unforgettable musical saga that captures the spirit of history’s sweetest and most powerful sound: freedom.

AMAZING GRACE is produced by Carolyn Rossi Copeland and presented by Broadway In Chicago.  On the announcement, Ms. Copeland said, “I am thrilled to be producing AMAZING GRACE.  ‘Amazing Grace’ is the world’s most beloved song, yet so few know the story behind it or John Newton, the man who penned it. This adventure and love story captured my imagination and I am privileged to bring it to Chicago audiences.”

Lou Raizin, President of Broadway In Chicago, added, “We are honored to present the world premiere of this rich and vibrant musical to audiences in Chicago.”  “We are so thrilled to see that audiences in Chicago will experience AMAZING GRACE.  It’s a musical that is near and dear to our hearts because it is so beautiful and powerful,” added Michael Price, Executive Director, Goodspeed Musicals, where a developmental workshop of the musical was presented in the Spring of 2012.

Click here to watch a sneak peek of AMAZING GRACE.

BIOGRAPHIES
JOSH YOUNG (John Newton) Josh originated and currently stars in the role of “Che” in the first national tour of the Tony Nominated Broadway revival of Evita. He received a 2012 Tony® Award nomination and Theatre World Award for his critically acclaimed Broadway debut as “Judas” in Andrew Lloyd Webber’s Jesus Christ Superstar, directed by Des McAnuff. He appeared in two seasons at The Stratford Shakespeare Festival where his credits include: “Judas” in Jesus Christ Superstar, “Connie Rivers” in Grapes of Wrath, and “Che” in Evita directed by Gary Griffin, earning Broadway World Awards for each. Josh also appeared as “Marius” in the US National Tour of Les Miserables and “Tony” in the International Tour of West Side Story. Josh has performed in North America’s finest regional theaters including La Jolla Playhouse, Walnut Street Theater, St. Louis MUNY, Baltimore Center Stage and North Carolina Theatre. He’s been involved in new works with NYC’s Roundabout Theatre Company, The Transport Group and The New York Musical Theater Festival. Josh is the co-founder of Cutting-Edge Composers (cuttingedgecomposers.com), a concert and weekly web series on broadwayworld.com, created to give exposure to musical theatre’s next generation of songwriters. BFA Syracuse University. Tweet @joshpaulyoung.

CHRISTOPHER SMITH (Book, Music, and Lyrics) wrote his first musical at the age of 17. That musical was performed at the University of Delaware when Chris was a senior in high school. Chris had left theatre behind to work as a police officer and Youth Outreach and Education Director in Montgomery County, Pennsylvania when the idea of Amazing Grace fell into his lap. A chance stroll through the church school library led him to pick up a book about a person he hardly knew: John Newton. Chris became convinced that his was a story that could bridge the gap between ordinary experience and deep struggles of the soul.

ARTHUR GIRON (Book)’s plays include Edith Stein, Boy Dies Dancing Mambo, Money, Innocent Pleasures, Dirty Jokes, Becoming Memories, Flight, A Dream of Wealth, Moving Bodies, The Golden Guitar, Memories of Our Women, The Coffee Trees, Emilie’s Voltaire, and St. Francis in Egypt, in addition to many one-acts. Among Arthur’s recent New York productions are The Coffee Trees (Beckett Theatre) and Emilie’s Voltaire (Beckett Theatre). His prizes include the Los Angeles Critics’ Awards for Outstanding Achievement in Writing (Twice) and the Galileo Prize. In addition, he has been awarded three commissions from The Alfred P. Sloan Foundation as well as commissions from the Metropolitan Opera Guild and the New York Shakespeare Festival. He is the former Head of the Graduate Playwriting program at Carnegie-Mellon University and a Founding Member of the Ensemble Studio Theatre in NYC, currently in its 37th year, a theatre company in which he remains active and is dedicated to the production of new plays.

GABRIEL BARRE (Director) is an internationally acclaimed director having just returned from Seoul, Korea where he directed the world premiere of the Frank Wildhorn musical, Tears of Heaven. In Prague, Czech Republic, he directed another original musical, Carmen, now in its third sold out year, as well as a hit revival of Jesus Christ Superstar. His credits in the United States include the New York productions of The Wild Party by Andrew Lippa (nominated for 13 Drama Desk Awards and 5 Outer Critics Circle awards, both including Best Director and for which he won the Calloway Award), Summer of ‘42, Stars in Your Eyes, Honky-Tonk Highway, john & jen and Almost, Maine. He directed the US and Canadian tour of Pippin, as well as the national tour of Rodger and Hammerstein’s Cinderella, starring Eartha Kitt. His regional theatre credits include Private Lives at Seattle Repertory Theatre, Tom Jones, Camelot and the world premiere productions of Memphis, at the North Shore Music Theatre in Boston and at Theatreworks in California; Sweeney Todd,Finian’s Rainbow, Houdini and many other new musicals at the Goodspeed Opera House; Stand By Your Man at the Ryman Auditorium in Nashville; Hay Fever and Pericles at the Shakespeare Theatre of New Jersey; Little Shop of Horrorsand Flower Drum Song at the American Musical Theatre of San Jose; as well as Tommy, Hair and Love’s Labours Lost at the Connecticut Repertory Theatre. As an actor, he has been nominated for a Tony Award as Best Actor in a Musical and appears often in film and on TV.

CAROLYN ROSSI COPELAND (Executive Producer). Most recently Carolyn was lead producer for Freud’s Last Sessionwhich has had an unprecedented run Off Broadway and won Best Play for the 2010-2011 Off Broadway Season. Carolyn also produced Freud’s Last Session in Chicago for 8 months at The Mercury Theatre starring Mike Nussbaum.Freud’s Last Session continues to be performed in major markets in the United States as well as Mexico, Sweden, Norway, Denmark, Brazil, Spain and Argentina, Japan, Australia, Hungry, Singapore and Hong Kong. Carolyn is a graduate of Tulane University where she majored in Political Science. Upon graduation she worked for The Honorable Peter W. Rodino, Jr as a Congressional Aide. She left the theatrics of Capitol Hill for a life in the theatre. She has been producing theatre since 1979 when she founded The Lamb’s Theatre Company in the heart of Times Square. As Producing Director she led The Lamb’s into an award winning and financially successful enterprise. She was dedicated to producing new American Musical and Plays musicals and gave birth to such shows as Smoke on the Mountain, Gifts of the Magi, the revival of GODSPELL, Johnny Pye and the Foolkiller, John and Jen, The Prince and the Pauper, and The Roads to Homewritten and directed by Horton Foote. The Lambs Theatre was the home of the PBS radio show “Prairie Home Companion” starring Garrison Keillor. Carolyn oversaw a complete renovation of the theatre and the creation of a second space known as The Lamb’s Little Theatre (www.lambstheatre.org for list of all productions). In 1998 Carolyn was sought out by Madison Square Garden/Radio City Entertainment to oversee the historic remount of The Scarlet Pimpernel on Broadway and following its success she became the Vice President for Creative Affairs for Radio City Entertainment (RCE). At RCE she oversaw The Christmas Carol at the world famous Madison Square Garden Theatre, The Christmas Spectacular at Radio City Music Hall and developed new performance opportunities for the world famous Rockettes. She opened her own production company which has served as a producer for The Gaylord Group at the Ryman Auditorium in Nashville, Tennessee and currently is the Executive Producer for Strouse IP, the company that controls and manages the works of the great American composer Charles Strouse. She is married to Architect James Masson Copeland and together they are the proud parents of Margaret, Beatrice and twins Marion and Eugenia.www.crcproductions.org.