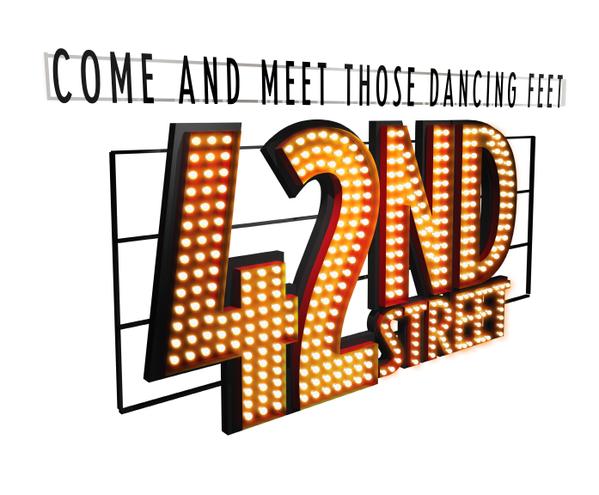 Broadway In Chicago is thrilled to announce the quintessential backstage musical comedy classic 42nd STREET will celebrate a two-week engagement at the Cadillac Palace Theatre (151 W. Randolph) with a sparkling new production,  March 8 – March 20, 2016. 42nd STREET will be directed by co-author Mark Bramble and choreographed by Randy Skinner, the team who staged the 2001 Tony Award® winning Best Revival.

42nd STREET is the song and dance fable of Broadway, with an American Dream story and some of the greatest songs ever written, including “We’re In The Money,” “Lullaby of Broadway,” “Shuffle Off To Buffalo,” “Dames,” “I Only Have Eyes For You” and of course “42nd Street.”

With book by Michael Stewart and Mark Bramble, music by Harry Warren and lyrics by Al Dubin, 42nd STREET is based on a novel by Bradford Ropes and Busby Berkeley’s 1933 movie and tells the story of a starry-eyed young dancer named Peggy Sawyer who leaves her Allentown home and comes to New York to audition for the new Broadway musical Pretty Lady.  When the leading lady breaks her ankle, Peggy takes over and becomes a star.

The original production of 42nd STREET was produced in 1980 on Broadway by David Merrick and featured direction and dances by Gower Champion.  It played on Broadway for 3,486 performances, winning 1981 Tony Awards® for Best Musical and Best Choreography.  The Broadway revival, which opened in 2001, played for 1,524 performances and earned two Tony Awards® including Best Revival of a Musical.

Group tickets for 10 or more are now on sale by calling Broadway In Chicago Group Sales at (312) 977-1710. Individual tickets for 42ND STREET will go on sale at a later date.  For more information, visit www.BroadwayInChicago.com.

MARK BRAMBLE (Director/co-Author) began his theatrical career working for legendary producer David Merrick, for whom he worked on more than 20 Broadway productions.  As author, his shows includeBarnum, which introduced Glenn Close as a leading actress, with songs by Cy Coleman and Michael Stewart (10 Tony Award nominations including Best Book and Best Musical, Outer Critics Circle Award for Best Musical); 42nd Street, with songs by Harry Warren and Al Dubin, produced by David Merrick with direction and choreography by Gower Champion (Tony Award for Best Musical, Laurence Olivier Award for Musical of The Year, Evening Standard Drama Award for Best Musical, Plays and Player Citation For Musical Of The Year, etc.); The Three Musketeers with the music of Rudolph Friml;  many collaborations with Michael Stewart including The Grand Tour, with songs by Jerry Herman; Treasure Island, with songs by Jule Styne; and the off Broadway opera Elizabeth & Essex, based on Maxwell Anderson’s playElizabeth The Queen, with music by Doug Katsaros, and Pal Joey ’78, which he adapted for the Los Angeles Civic Light Opera production starring Lena Horne.  At the Haymarket Theatre in Leicester, Mr. Bramble and Henry Krieger (composer of Dreamgirls) created Fat Pig, a rock and roll extravaganza about health.  He directed the 2001 Tony Award winning Best Revival of 42nd Street on Broadway for which he received a Tony Award nomination, and has staged productions of the show in London, Sydney, Tokyo, Berlin, Amsterdam, Shanghai, and Vienna.  Mark Bramble was educated at the McDonogh School, Emerson College and New York University.  He received an Honorary Doctor of Arts from Washington College.

CAITLIN EHLINGER (Peggy Sawyer) is thrilled to be making her tour debut with 42nd Street! Favorite credits include Chicago (Roxie) and West Side Story (Anita). Special thanks to her family, Suzanne Semans, Jack Beetle, and David Kent. www.caitlin-ehlinger.com