Brian Justin Crum Is A Triumph In WE WILL ROCK YOU 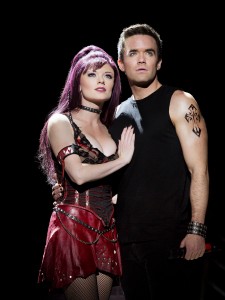 The influence the rock group Queen has had and continues to have on our culture comes front and center in the spectacular musical We Will Rock You, the London hit which is now at the Cadillac Palace through October 27th.

The original production which opened in the West End in 2002, has a book by Ben Elton, transports the patron to iPlanet where live music and rock and roll is dead, except for the idealistic Bohemians who are in search of the illusive “Dreamer”.  For it is he who will restore rock and roll to the world.  That person is Galileo (Brian Justin Crum who is a triumph) who meets fellow rebel Scaramouche (a powerful Ruby Lewis). The two venture off on a journey to discover the true meaning of Galileo’s visions and in doing so, free the world from its digital domination.

The through line of this of course is the amazing music of Queen which fills the theatre like liquid gold.   Mr. Crum’s vocal  prowess channels that of Freddy Mercury himself and his performance is something unique to behold.

For Queen fans, and opening night was packed full of them, all the hits come flying back at you.  Radio Ga Ga, Under Pressure, Another One Bites The Dusts, Flash and We Are The Champions are all given relevant meaning to Mr. Elton’s updated book.

Word to the wise, do not try to be first out of the parking garage because you will miss one of the best encores ever produced in modern theatre involving the most popular Queen song of all.

Ben Elton, who also directs, incorporates the latest in video projections, lighting and sets (Mark Fisher and Willie Williams) and bolstered with spot-on musical direction by Rick Hip-Flores. Arlene Phillips choreography flows seamlessly with Mr. Elton’s direction with not one weak  link in the ensemble.

We Will Rock You proves how far ahead of their time Queen and their music was and continues to be.   Those to young too remember the original band will surely become fans of this amazing group and will ensure their popularity for generations to come.