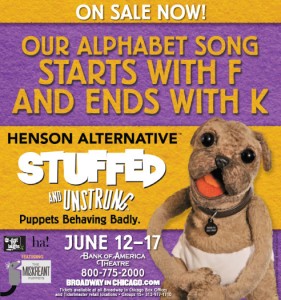 Produced by WestBeth Entertainment and Henson Alternative, STUFFED AND UNSTRUNG is created by award-winning director, producer, and writer Brian Henson and actor and improvisational guru Patrick Bristow and features the Miskreant puppets and The Jim Henson Company’s renowned puppeteers.

STUFFED AND UNSTRUNG is a wild romp in which the skilled art of puppetry and spontaneous comedy collide. Unpredictable and irreverent, it’s never the same show twice. Expert puppeteers create twisted scenes and songs on the fly, as suggestions from the audience prompt the improvised storylines unfolding on stage. This production delivers “two shows in one” as the hilarious puppet action is projected live on large screens flanking the stage, while the puppeteers race around below – displaying their skills in full view of the audience. With live musical accompaniment and Bristow as host, STUFFED AND UNSTRUNG boasts a cast of six world-class puppeteers in an uninhibited live puppet performance, as never seen before.

“Does anyone really want to see x-rated puppets? YES WE DO!”
– The Late Late Show with Craig Ferguson