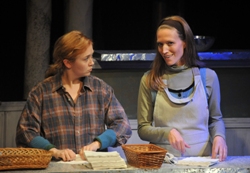 Secrets can be a very powerful and destructive force.  In The Spitfire Grill, the notion of how secrets can destroy a person is examined in very profound ways.  Since its off-Broadway premiere in 2001, The Spitfire Grill has become a regional theater favorite, which is understandable as it has a five person cast and uses minimal orchestrations which is a perfect for theaters with space and budgetary concerns.  As the Bohemian Theatre Ensemble has returned to their old confines in Roger Park, space is once again an issue and the selection of the piece obvious as they mount a very solid production of a mediocre musical. 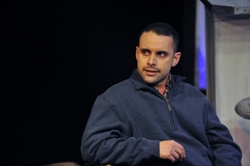 The stage version parallels closely with its 1996 movie counterpart that follows protagonist Percy, who is being paroled after a five-year prison sentence.  Percy’s hoosegow mind-scape is a pictorial newspaper clipping of Gilliad, Wisconsin where she embarks after her release.   In Gilliad, Percy checks-in with Sheriff Joe who points her towards the Spitfire Grill and finds her employment under owner Hanna, who is about as sure-footed as a gazelle in heat and more temperamental then Mel from the old Alice television series.   As the musical drones on, we are introduced to the grill’s regular customers, including the Effy, the Gladys Kravits of Gillad; Hanna’s Nephew Caleb and his wife Shelby who both embody the stereotypical back-woods male/female persona’s; and finally a mysterious mountain man who has a appetite for day old French baguettes.  After Hanna falls and breaks her leg, Percy and Shelby tend to the diner and the plot begins to unfold as dark secrets of these characters emerge.  Each has to confront the demons in their past and allow the truth to emerge, thereby rendering their secrets powerless and thus find reconciliation within themselves and each other. 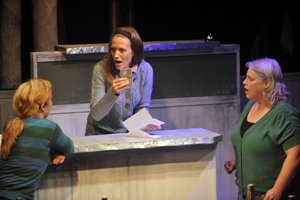 The cast for BoHo’s production all turn in erstwhile performances.  Laura Savage embodies her Percy with a nice balance of angst and heart.  Ms. Savage possesses a lovely and powerful voice and gives great weight to her numerous vocal numbers.   Ms. Savage’s best moments on stage are opposite Laura Lindahl’s Shelby who grounds this production with passion and sympathy.  Jeremey Trager, who has one of the best male voices in Chicago, plays a brooding Caleb who can snap at any minute.  Nancy Kolton brings her big alto belt to Hanna but ultimately is a bit too young for the role.   As Sheriff Joe, Matt Keefer gives the most believable performance in this production finding his own redemption in Percy’s vision of Gilliad. 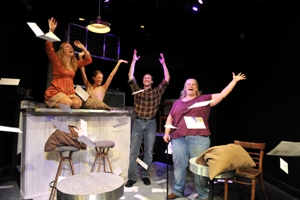 The Spitfire Grill  moves at a steady pace but there are times when Anna Hammonds direction is a bit unsteady.   Several scenes are overacted rendering them unbelievable.  The distance between actor and audience is only a matter of a few feet so the piece needs to be directed akin to a film close-up, where the actor’s small facial gestures reflects the emotion.

The main problem with The Spitfire Grill is that the musical itself cannot decide what it wants to be.  The book by both Fred Alley and James Valcq,  never allows the characters to be developed to the extent  the actors are demanded to fulfill.  Also, musical numbers often get in the way of the story.  Instead of advancing the plot, the voluminous songs by Mr. Valcq come one after the other to explain the obvious, with some of the most ridiculous lyrics by Mr. Alley, ever penned (“wey- hoe, ice and snow, will the winter ever go?” or “but the lumberman came, swung a big axe and cut the forest down”.)…really?     In the alternative, The Spitfire Grill would work better either as a straight play or as a fully sung through piece (with a different lyricist) which would give more emotional stability then in the show’s current state.  The musical version of Little Women suffers from this exact same dilemma.

BoHo has been doing fine work of late including a quintessential production of Floyd Collins.  The Spitfire Grill only proves that BoHo has not only outgrown their old space but has outgrown this mediocre material as well.