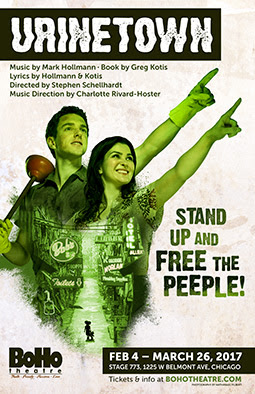 CHICAGO THEATRE WEEK
BoHo Theatre is proud to be part of Chicago Theatre Week, which celebrates the rich tradition of theatre-going in Chicago. Returning for the fifth year, Chicago Theatre Week 2017 will be held February 9-19 and will include value-priced tickets to more than 120 shows. Visitors and residents will again have the opportunity to sample the extraordinary range of theatrical offerings throughout Chicagoland. The CTW ticket offers will be listed on a centralized website – www.ChicagoTheatreWeek.com – starting January 10, 2017. Chicago Theatre Week is presented by the League of Chicago Theatres with support from Choose Chicago.

THE PLAY
In a dystopian near-future, a terrible water shortage has led to a government-enforced ban on private toilets. The citizens must use public amenities, regulated by a single malevolent company that profits by charging admission for one of humanity’s most basic needs. Amid the people, a hero decides that he’s had enough and plans a revolution to lead them all to freedom! At a time when private companies are controlling more and more of our basic needs and faith in elected officials is at historic lows, URINETOWN challenges both institutions with irreverently humorous satire.

“URINETOWN is both a celebration of the musical form and a satirical piece of activism,” director Schellhardt says. “In today’s world where hope seems increasingly like a political action, the themes of this play – the misuse of power, populist revolution, the uncertainty of environmental sustainability – seem as necessary today as when the show was created.”

PRODUCTION TEAM
Produced by Meg Love
Scenic Design by Tony Churchill, Lighting Design by G. Max Maxin IV, Costume Design by Elizabeth Wislar, Sound Design by Joe Palermo, Properties Design by Natasza Naczas, Production Managed by Lindsay Brown, Stage Managed by Dalton Long.
BoHo Theatre’s mission is to create bold theatre that challenges convention through innovative storytelling and unites artist and audience in the examination of Truth, Beauty, Freedom and Love through the lens of human relationships. Its vision is to create a shared community of artists and patrons in which all members are moved through art to make thoughtful, well-examined, caring relationships the highest priority in their lives.

BoHo’s 2017 season features URINETOWN by Mark Hollmann and Greg Kotis at Stage 773, THREE DAYS OF RAIN by Richard Greenberg at the Heartland Studio, and MARIE CHRISTINE by Michael John LaChiusa at Theater Wit.