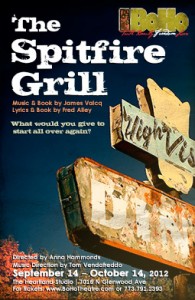 BoHo Theatre begins its 2012/2013 season by returning to its roots with an intimate production of the acclaimed musical The Spitfire Grill by James Valcq and Fred Alley. The production runs September 14th through October 14th, 2012, at the Heartland Studio in Rogers Park, and is directed by BoHo company member Anna Hammonds. Hammonds most recently acted as assistant director on BoHo’s acclaimed Floyd Collins at Theater Wit. The Spitfire Grill represents the Bohemian Pillar of Freedom in BoHo Theatre’s 2012/2013 Season.

The show follows recently paroled convict Percy Talbott, who is looking for a place to start over, and rural Gilead, Wisconsin, seems just the place. She takes a job at the Spitfire Grill, a crumbling diner where the townsfolk congregate and gossip, run by an ornery widow named Hannah. Hannah has been trying to sell the diner to escape from the painful memories it holds, but the property has been on the market for a decade with no takers. Soon, Percy hatches a plan to hold a raffle for ownership of the Spitfire Grill—for one hundred dollars and an essay about why they might want the Grill, anyone can enter the contest. As the seasons change and rumors about her past build, the contest entries begin to roll in, and Percy starts to realize that she’s not the only person in Gilead with a history.

Building on the critical success of its recent hits Big River and Floyd Collins, which also featured folk and bluegrass-inspired musical sensibilities, BoHo looks to bring new life to this popular musical about rural America. When the show debuted in 2001, Billboard Magazine said “The Spitfire Grill is like a breath of fresh country air,” and Jonathan Frank wrote in Sound Advice, “The Spitfire Grill has a simplicity and emotional resonance that has become all too rare in musical theater.” By returning to the company’s home at the Heartland Studio in Rogers Park (following two years of successful shows at Theater Wit), director Hammonds plans to use the closeness and immediacy of this 30-seat venue to uncover the real emotional weight of the inhabitants of Gilead. The production’s music direction is headed by Tom Vendafreddo, who promises a reimagining of the show’s music to fit BoHo’s honest and authentic approach, with a stripped down orchestration and thoughtful layering of instruments with an ear toward telling the story of rebirth through music.

With a reconceived musical sensibility and the company’s trademark honesty, BoHo’s fall production of the The Spitfire Grill will have you believing in the simple power of redemption.

BIOS
Anna Hammonds (Director)
Anna Hammonds has been a proud company member with BoHo Theatre for over two years. She made her BoHo debut in the critically-acclaimed Big River (Mary Jane, Miss Watson) and was last seen as Lizzie in The Rainmaker. She served as assistant director for BoHo productions of Pippin and Floyd Collins. Other Chicagoland credits include Hero and A Christmas Carol at Lincolnshire Marriott,Noises Off (Poppy) at Theatre at the Center, It’s a Wonderful Life: Radio Play(Sally/Mary) at Fox Valley Repertory, and Whoopi Goldberg’s White Noise (Laurel U/S) at Royal George Theatre. Other theatres she has had the privilege of working with include Drury Lane Theatre, Emerald City Theatre, and The Renaissance Repertory Theatre in Tennessee for which she was an active company member for three years. Anna was seen as Belle in two national tours of A Christmas Carol with Nebraska Theatre Caravan, based out of Omaha, Nebraska.

Tom Vendafreddo (Music Director)
Tom Vendafreddo holds a Bachelors of Music degree from Eastman School of Music and an MFA in Musical Theatre from San Diego State University. An active and passionate music director, actor, and educator, Tom has worked with Drury Lane Oakbrook, La Jolla Playhouse, The Old Globe Theatre, Roosevelt University, Metropolis Performing Arts Center, among many others. This past January, he was selected to attend Goodspeed Opera House’s Music Direction Intensive, under the direction of Michael O’Flaherty.

BoHo Theatre structures each of its seasons around the four pillars or Bohemian philosophy: Truth, Beauty, Freedom, and Love. BoHo’s 2012/2013 season features:The Spitfire Grill by James Valcq and Fred Alley (Freedom) at the Heartland Studio, Pygmalion by George Bernard Show (Beauty) in partnership with Stage Left Theatre at Theater Wit, Hauptmann by John Logan (Truth) at the Heartland Studio, and Kiss of the Spider Woman by John Kander, Fred Ebb, and Terrence McNally (Love) at Theater Wit.

BoHo Theatre seeks to challenge convention through literary originality and eclectic expression while fostering an ever-evolving artistic environment in which people are inspired to learn, think, dream, and feel; to teach others and ourselves how to expand, create, and present art through theatre while reveling not only in the process, but also in the journey.