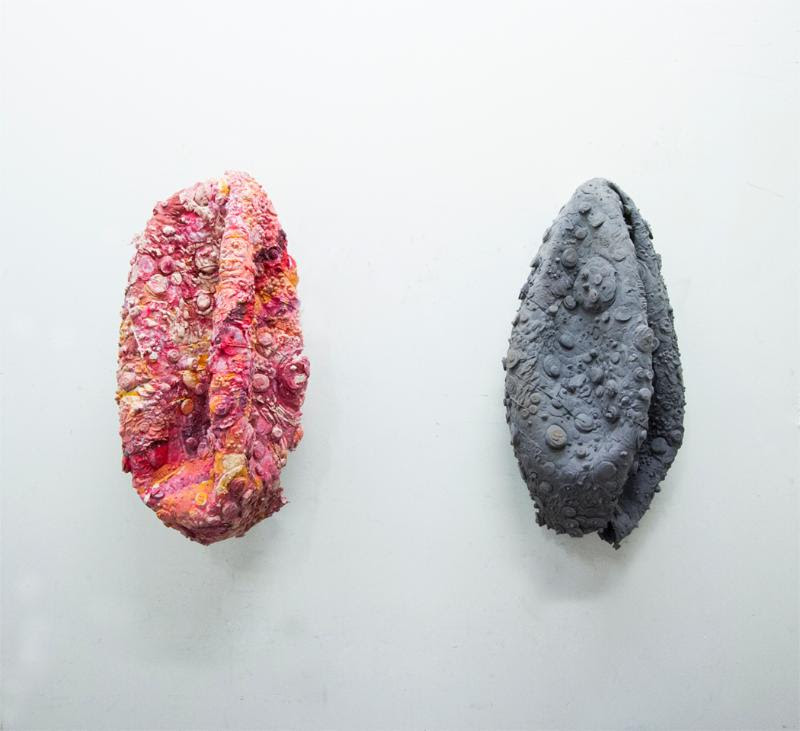 The Museum of Contemporary Art (MCA) Chicago presents BMO Harris Bank Chicago Works: Sarah and Joseph Belknap, a substantial group of new works that reflect on our place in the cosmos. These projects include sculptures, a site-specific installation, and a multi-channel video. The Belknaps’ interdisciplinary practice draws from a range of sources including the history of science, notions of space in the popular imagination, and personal observations. Organized by Karsten Lund, MCA Curatorial Assistant, the exhibition is on view October 11, 2014 to February 24, 2015.

The exhibition features an array of tactile sculptures that the artists describe as “moon skins,” modeled on the moons of Earth and Jupiter, as well as distant exoplanets. The Belknaps replicate the moon’s craggy surface by carving a model by hand and then casting it in silicone rubber. One gallery is filled with a twenty-four foot installation of two massive craters placed side by side: one based on the largest impact crater on the Earth (found in South Africa), and the other on the largest crater on the moon. These sculptural reliefs map two different topographies, more than 200,000 miles apart, but also allude to the ancient history of asteroid collisions that the Earth and moon have in common. The exhibition also includes a new video based on five satellite feeds of the sun that shows solar activity, most of which is normally invisible to the human eye-including sunspots and magnetic discharges.

The Belknaps married in 2008 and began working together the same year. They received their MFAs from the School of the Art Institute of Chicago, and their work has been exhibited in Chicago, Detroit, New York, and St. Louis. They have also presented performances at institutions throughout Chicago, including the Chicago Cultural Center, Hyde Park Art Center, and the MCA.

The MCA is located at 220 E. Chicago Avenue, one block east of Michigan Avenue. The museum and sculpture garden are open Wednesday through Sunday from 10 am to 5 pm and Tuesday from 10 am to 8 pm. The museum is closed on Monday. Tuesdays are Community Free Days with free admission for Illinois residents. Suggested general admission is $12 for adults and $7 for students and seniors. Children 12 years of age and under, MCA members, and members of the military are admitted free. Information about MCA exhibitions, programs, and special events is available on the MCA website at mcachicago.org or by phone at 312.280.2660.