10-foot by 10-foot reproductions of the winning works will be displayed at Blue Man Group Chicago’s Outdoor Art Gallery, located on the south exterior wall of the Briar Street Theatre (3133 North Halsted Street), with the original pieces on display inside the theater lobby. The artwork will be unveiled in October 2016, coinciding with Chicago Artists Month. More information regarding the unveiling event will be announced at a later date.

Artists interested in the competition can visit entrythingy.com/www.blueman.com for more details, full rules and regulations and entry requirements. The work should not feature a Blue Man. The competition is open to artists working in acrylic, digital art, drawing/pastel, mixed media, oil, painting, photography and printmaking. No three dimensional pieces will be accepted.  Entries must be submitted digitally and will be accepted June 2, 2016 through Monday, August 8, 2016. 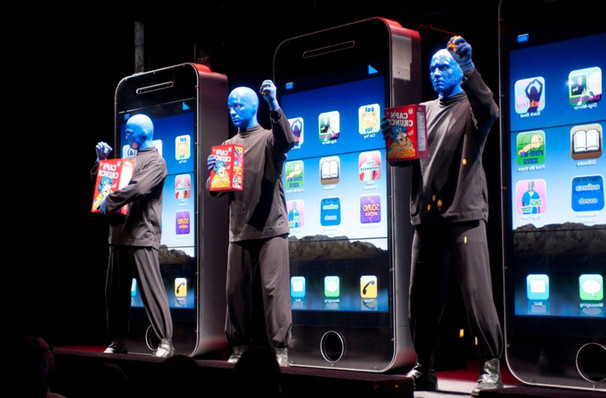 The 2016 Blue Man Group Art Competition will be Blue Man Group’s second art competition. The inaugural competition was held in 2013. The 2013 winning artwork, currently located in the lobby of the Briar Street Theatre, will be moved to other locations within the building for patrons to enjoy.

Anna Cerniglia is a lecturer of photography at the School of the Art Institute of Chicago, freelance producer, and the Director/Founder of Johalla Projects. Cerniglia has worked extensively throughout Chicago to convert unconventional spaces into alternative venues for exhibiting art.  Cerniglia founded Johalla Projects in 2009, and since then has produced large varieties of exhibitions, murals and art installations throughout the Chicagoland area including projects for the Chicago Transit Authority, Pitchfork Music Festival, 35Denton Festival, Soho House Chicago and Lollapalooza. In addition to helping found South Union Arts, she has curated and worked alongside multiple organizations such as Loop Alliance, Grolsch; Miller Coors and with curator Barbara Goebels-Cattaneo and for La Porta Blu Gallery of Rome, Italy.

Tom Galassi is Blue Man Captain and Assistant Director of Performer Development, Blue Man Group) has worked for Blue Man Group for 18 years. During that time, he has served as Blue Man Captain in Chicago, Boston, New York, Las Vegas, Toronto, Berlin, Tokyo, Brazil and Taiwan. In addition to being a Blue Man, Galassi has served as Assistant Director of Performer Development since 2013, assisting in the training of new Blue Men and focuses on character development for the show. He’s also been involved in writing new content for the production.

Cory Jobe is the Director of the Illinois Office of Tourism, responsible for leading the state’s tourism industry marketing and development efforts. Jobe works in collaboration with tourism industry professionals to promote visitor travel both domestically and internationally, and to help grow the tourism industry throughout the state. Prior to his appointment by Governor Bruce Rauner in January 2015, Jobe was the Deputy Chief of Staff for the Illinois Office of the Comptroller from 2011 to 2015. Jobe also serves on the Springfield City Council as the elected alderman of Springfield’s 6th ward, which includes tourism attractions like the Dana Thomas House and the Lincoln Home National Historic Site. Outside of work, Jobe serves on the board of directors for the Boys and Girls Club of Central Illinois, The Hope Institute for Children and Families, The Phoenix Center and the Springfield Urban League.

Jeff Quay has worked with Blue Man Group for more than 20 years and currently serves as Associate Music Director. In addition to performing nightly in the Chicago production, Quay’s duties as Associate Music Director include helping to oversee all the different Blue Man Group shows around the world.  He is responsible for taking part in the audition process of new musicians, teaching them once they are hired and then maintaining the high performance standards of Blue Man Group. Over the years, his involvement in the group has grown to include several televised performances on “The Tonight Show with Jay Leno,” “Last Call with Carson Daly,” and the 2001 Grammy Awards.  His drumming can be heard on the Grammy nominated recording “Audio,” “The Complex” and “THREE.”

Candace Wark and Shirley Nannini joined forces as Wind Flow Photography in 2012.  They utilize an innovative and novel approach to capture the essence of wind movement that conveys its transient nature, becoming award-winning photographers who have had numerous solo, group, museum and gallery shows.  In addition to their photography careers, Candace Wark has been an engineering professor at Illinois Institute of Technology for 25 years, specializing in the field of aerodynamics and utilizing photography in her research. Shirley Nannini worked at Evanston Township High School as a teacher, coach, and administrator for more than 30 years before retiring and pursuing her passion for photography. In 2013, Shirley and Candace’s work was selected as one of the winners of the inaugural Blue Man Group Art Competition.

Chris Wink’s is the co-founder of the international theatrical sensation, Blue Man Group, and the CEO of its parent organization Blue Man Productions. Wink is also an award-winning writer and performer, Grammy-nominated musician and composer and co-founder of the NYC-based Blue School. Wink’s wide ranging knowledge of art and music combined with his ability to balance counter-intuitive elements helped to develop the universal language of the Blue Man character — classic comedic timing paired with subtle scientific concepts and high art references mixed with populist pleasures. As the Blue Man Group company continues to grow, Wink retains his unwavering focus on pursuing projects that speak directly to the primal human need to create fully, to express fully, to live fully.   He is a frequent guest speaker on the topic of creativity, and is currently developing several projects beyond the blue man character, including a Broadway show.

Blue Man Group at the Briar Street Theatre
Blue Man Group’s production provides its audience with a unique and thrilling multi-sensory experience that blends innovative theatrical spectacle and dynamic original music with hilarious comedy, art, technology and science to create a performance experience unlike any other. Tickets are available from $49-$99. Tickets may be purchased at the Briar Street Theatre by calling the box office at (773) 348-4000; by calling Ticketmaster at (800) 982-2787; at all Ticketmaster ticket centers or online atwww.ticketmaster.com/bluemanchicago.

For more information and a full show schedule, visit www.blueman.com/tickets/chicago.

About Blue Man Productions
In 2016, global entertainment phenomenon Blue Man Group celebrates 25 years of living in full color with a series of new projects and appearances. The company is best known for the award-winning Blue Man Group show, performed in more than 15 countries and seen by more than 35 million people worldwide since 1991. A dynamic combination of music, comedy and technology, the show appeals to a broad range of age groups and cultural backgrounds. It is continually refreshed with new music, fresh stories, custom instruments and state-of-the-art technology.

This creative collective is part of the pop culture zeitgeist. Beyond the stage show, they have toured the globe with the “Megastar World Tour” rock concert parody, released multiple albums, including the Grammy-nominated Audio, and the recently released, THREE, and contributed to numerous film and TV scores. They’ve served as the face of branding campaigns for Intel and TIM/Brasil and appeared countless times on hit shows like “The Tonight Show”, “Arrested Development”, “Ellen”, “Schlag den Raab” (Germany), “WOWOW” (Japan), and “Caldeirão do Huck” (Brasil).