The Nicholas Brothers were the most legendary dance team in history. Harold & Fayard Nicholas broke through racist color barriers and rose to international stardom on stage and screen. They were acclaimed as the greatest dance team in history during the 1930s and ‘40s. We know them as a dynamic, high-flying, dance duo, but who were these men outside of the spotlight? 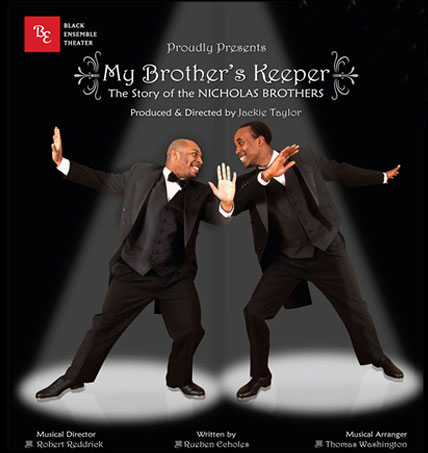 This phenomenal story is told by the women who knew them best and features the music of Cab Calloway, Bill “Bojangles” Robinson, and Dorothy Dandridge, as well as original music written by Rueben D. Echoles, who also directs and stars as Harold Nicholas.  Don’t miss this vibrant, intriguing and exciting Black Ensemble musical production featuring the Black Ensemble Orchestra under the direction of Robert Reddrick.

$55 on Thursdays and Saturday matinees;

A 10% discount is available for students, seniors, and groups.

On November 18, 2011, The Black Ensemble Theater Cultural Center opened and is able to accommodate larger-scale productions, bigger audiences and a wider range of educational programming. The new facility includes amenities such as a 299-seat main stage theater (double the capacity of the original venue); 14 offices, classroom space, rehearsal hall, dance studio, scene shop, costume shop, and wardrobe rooms; seven dressing rooms; rehearsal room for musicians; front lobby space with concession areas; and an indoor parking garage.  The completion of a 150-seat theater, which will serve as an experimental stage for the work of the Black Playwright Initiative (BPI), with construction by General Contractor Norcon Inc., is expected in 2017.