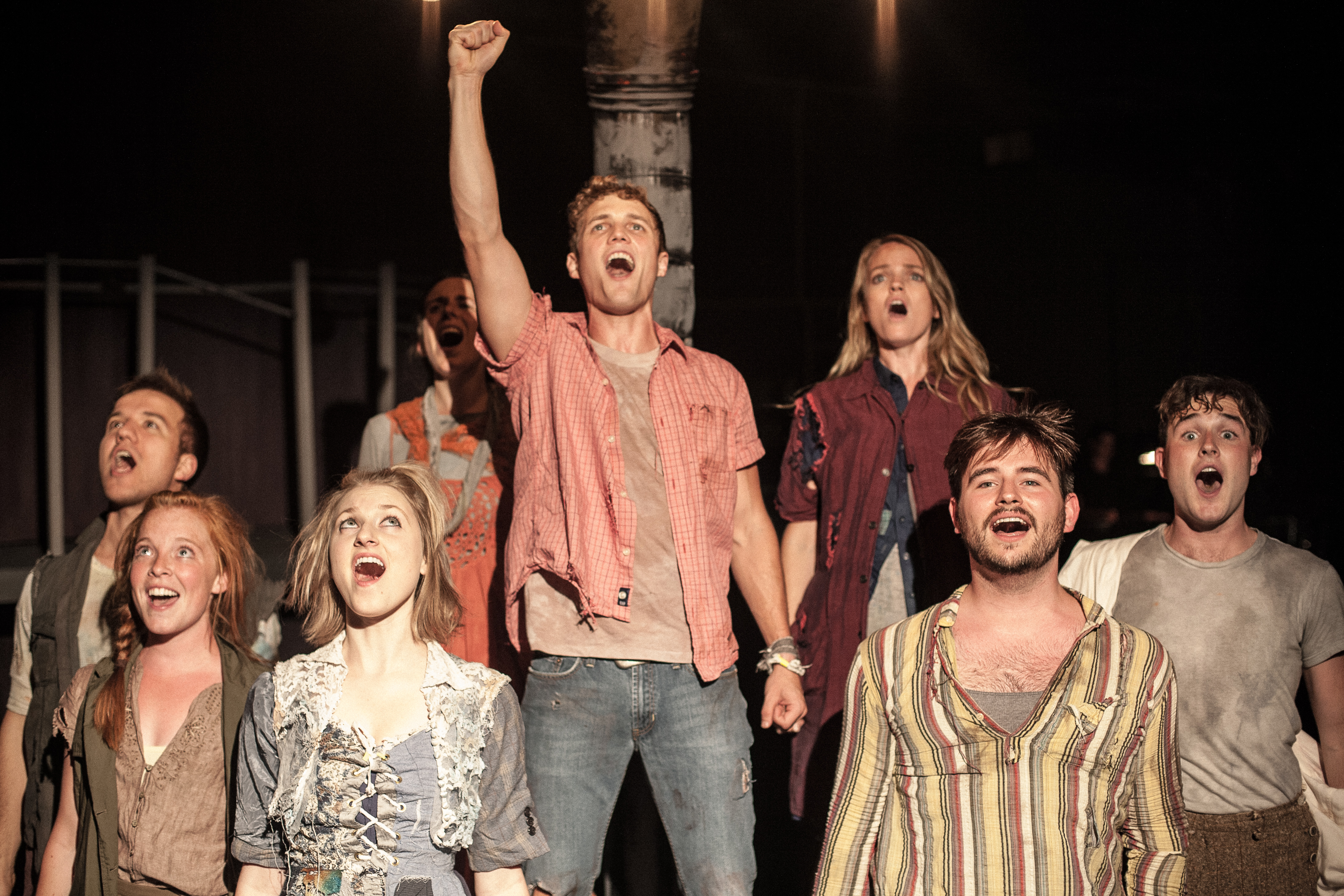 Presented by Awkward Pause the Musical Urinetown, now playing at the Flat Iron building 1579 Milwaukee Ave Suit 300, is as promised an offbeat journey. The story is the oldest story ever told, as the Narration goes, the writing in this presentation is honestly the star. The show itself is nothing special, in fact one might call it typical, the music is simplistic, the actors, for the most part are bad, everything is simplistic, and typical.  . . And if you think this you’re missing the bloody point.

Everything is to a point. That is the trick of Urinetown, it is a send up of its self, it should be done just as it is, and in such is magnificently horrid.  The Narration is forth wall shattering, and if you by the end of the first few scene do not realize that what you are in fact watching is a satirical characterization of a  musical and not in fact an honest musical, then you have missed the point, and will find that the show is “stupid.” However if you have a sense of the satirical, then you will Love Urine town. Confused yet?

The problem with a show like this is to divide what is purposefully bad and what is actually bad. In this case it’s all of one and very little of the other, making in fact the show genius. Officer Lockstock (Michael Hamilton), and Little Sally (Hillary Horvath), narrate the show throughout, not only giving overly, almost tedious exposition on the shows plot, but also providing an insulting commentary on the “Magic” of the American musical, and dramatic writing in general. The Plot like the rest of the show is simplistic and perhaps the most common plot there is the oppressed masses, are forced to pay overt fees to take a leak, if they don’t pay to pee they are dragged off to a place called Urine town, which in act two we find is simply being tossed of the top of the bright shiny tower.  The Corporate entity found in the Guise of Cladwell (Joshua R Barlett) is controlling the people and keeping them down through fee hikes provided by the Legislator corrupt politics payoffs and a tyrannical police force, if you can’t afford to pay to pee and have the audacity to pee behind a bush you are tossed off a building. Bobby Strong (Brandon Ruiter) one morning witness his Father dragged off to Urinetown after being unable to afford a morning squirt. And after falling in love with Hope Caldwell (Kelly Krauter), daughter of the corporate dictator, of course, sparks a revelation on the belief that taking a pee should be free. Don’t expect many plot twist, or revolutionary ideas the writing is simplistic. The plot will unfold exactly as you expect.

If this is so? Where then is the genius I mentioned earlier; if everything is so simplistic how can it be genius? Excellent point, because it’s not. In no way is Urinetown an opus, except in its simplicity. The songs are cardboard cut outs of every single song ever performed on stage, you will instantly recognize the charters for whom they are there is no mystery who is good and who is bad. They are overt in their inner devises, all Caldwell needs and black cape and a twisted mustache to be classic villain. “Neyh, Neyh” . . . So where is the genius. It is in fact in the staging of this production. Everything is so very, very 1950’s “shining city on a hill” perfect. The dream of the Reagan, yes President Reagan, there is nothing subtle about the plot line, there is nothing in this piece which is subtlety. But the staging the 1950’s perfection of the costumes, and the postures of the corporate types looking down on the groveling Masses who serve there point. Is the Republican wet dream of how a society should be simple straight line black and white, we are the high, we rule, you are the low, you serve. Ayn Rand, who I assume masturbated to movies like Fritz Lang’s Metropolis, would not see that this actually pure mockery of those ideals. Everything is in fact clean in the production simplistic, but a mockery of those clean dividing lines at the same time that in honesty have you rolling with laughter. If you see the mockery for what it is, and in this the star of the show is Marie Mohrbacher, who as choreographer, did a AMAZING job at the mockery, pulling every classic 50’s dance number, straight out of the 50’s -60’s Hollywood musical ear and trying to choke the audience with the ridiculous nature of it all. Literally I almost pee’d myself laughing when she through the “West Side Story” finger snapping into the torture scene.

The genius of play therefore lies in the utter mockery of the “Shiny City” the ideal, of the perfect musical, the perfect society. The show does a great job of shredding that ideal, and making the audience laugh, be careful how hard you laugh squeeze even a little pee out and they will drag you to Urine town. Oh and to all you liberals out there with you high ideals of complete freedom from the oppressive yolk of corporate control, you’re not free from ridicule either this show is fair and balanced in it’s mockery of the sociopolitical cycle of stupidity we find our nation, our world spinning around in. It is the simplification the overt narrative and the over acting that allows this mockery to come through as surpassingly humorously as it does.  So while I say that everything was bad in this play, it is so bad that it becomes genius, and if you’re are a fan of parody or satire, you will love Urinetown. If not, well it may not be for you.