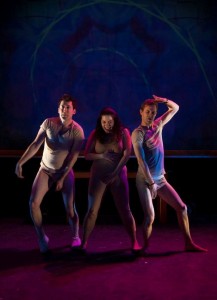 Speech & Debate, American Theater Company's remount of Stephen Karam's topical play, succeeds on several levels.   First, under the direction of P.J. Paparelli, the story works as both a contemporary comedy and a topical drama.   Second, the performances of the three leads are so polished, it is like watching a hit  sit-com in its third season.

First produced by ATC, in 2008 (which also marked Mr. Paparelli's inauguration to the theatre company), the initial success of Speech & Debate forged the relationship between playwright and director which gave us columbinus and the forthcoming Sons of the Prophet while cementing both as a major force on the national theater scene.

Speech & Debate looks at the complex and lonely lives of three high school students.  Solomon (Will Allan),  a reporter for the student newspaper who is out to expose one of his teachers in a sex scandal; Diwata (Sadieh Rifal) an after school video blogger who wants to form speech and debate club at the school; and Howie (William Patrick Riley) an gay transfer student trying to find some type of life in the small town of Salem.  Though strangers at the outset, each of the students will find that they need each other to obtain their own objectives and in the end, develop a familial bond that is quite moving.

What Mr. Karam excels at as a playwright is the ability to connect to people's isolation.  With Speech & Debate, the three students use the web as an outlet to alleviate their loneliness.   The use of the internet also serves up some interesting notions on free speech and sexual identity, but never in the conventional ways that has been a trap to other playwrights (such as the recent the recent Teddy Ferrara).     It is through that isolation and loneliness that Karam pulls out his comedy, but again the comedy is not conventional.  Instead it plays out more like a Christopher Guest mockumentary.   In fact the speech and debate club rehearsals and final performance in front of the reporter (with full body suits) is akin to watching some of the hilarious musical numbers from Waiting For Guffman (with Ms. Rifai firmly taking Parker Posey's mantle).

Ms. Rifai returns to the role of Diwatta and it is hard to imagine anyone more suited.  Mr. Allan, who was sensational as the misfit Mormon in The Whale, is equally as good here playing the student reporter with a bigger secret then Clark Kent.   The true find though is California transfer William Patrick Riley who is innately sincere, funny and truthful as Howie.   Then of course there is stalwart Janet Ulrich Brooks who gets double duty as Solomon's teacher/advisor and later as a reporter. 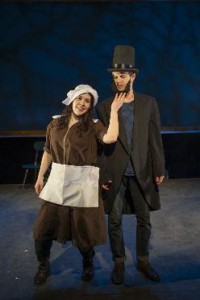 William Boles large chalkboard from columbinus is repurposed for this production and serves as the perfect utility for the requisite projections by Rasean DAvonte Johnson and Scotty Iseri and Lindsay Jones sound design is spot on.

By the end of Speech & Debate, the audience becomes so fully invested into these characters that is hard to let them go.   I am never one to advocate sequels for a play or musical, but it would be interesting to see how Mr. Karam could further develop these characters for new misadventures.