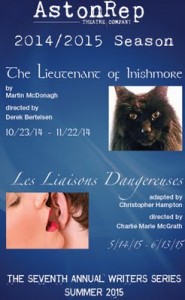 AstonRep Theatre Company is pleased to announce its 2014-15 its new artistic home, The Raven Theatre, 6157 N. Clark St. in Chicago. The season kicks off this fall with Martin McDonagh’s comedy THE LIEUTENANT OF INISHMORE, directed by Company Member Derek Bertelsen followed next spring by Christopher Hampton’s drama LES LIAISONS DANGEREUSES, directed by Charlie Marie McGrath. The season concludes next summer with the 7th ANNUAL WRITER’S SERIES, exposing and developing new works by some of Chicago’s most talented playwrights (venue to be announced). Tickets for all productions will go on sale at a later date.  For additional information, visit www.astonrep.com.

THE LIEUTENANT OF INISHMORE

THE LIEUTENANT OF INISHMORE is set in 1993 when the Northern Ireland peace process is struggling to come together and Mad Padraic, a member of the Irish National Liberation Army, chooses to leave Belfast and return to Inishmore upon the news that his beloved cat is ill. When he returns home he learns that his cat has in fact suffered a much more tragic and immediate fate. Padraic, a man whose mentally instability is legendary, is now intent on revenge at any costs.

Martin McDonagh is the author of Broadway hits including The Pillowman and A Behanding in Spokane.  He also wrote and directed the full-length feature films In Bruges and Seven Psychopaths. He won an Academy Award in 2006 for his short film, Six Shooter.  The Lieutenant of Inishmore was first produced by the Royal Shakespeare Company in London in 2001 and won the Laurence Olivier Award for Best New Comedy in 2003. The show received its New York premiere in 2006, receiving a Tony nomination for Best Play and an Obie award for playwriting. The Lieutentant of Inishmore is part of McDonagh’s Aran island trilogy, which also included The Cripple of Inishmaan, produced by MET in 2008.

A pair of rivals and former lovers use sex to humiliate and destroy others in this drama based on Choderlos de Laclos’ novel published six years before the French Revolution. LES LIAISONS DANGEREUSES’ 1985 stage debut was the winner of London’s Olivier Award and then multiple Tony Award nominations.  The film adaptation received three Academy Awards.

Christopher Hampton is a British playwright whose plays include Total Eclipse, The Philanthropist, Savages, Treats, Les Liaisons Dangereuses, Tales from Hollywood, The Talking Cure and Embers. His musicals (book and lyrics) include Sunset Boulevard and Rebecca, which opens on Broadway in November 2014. He has translated plays by Ibsen, Molière, Ödön von Horváth, Chekhov (his version of Uncle Vanya opens in the West End in November 2014) and Yasmina Reza. Screenplays include Dangerous Liaisons, Mary Reilly, The Quiet American, Atonement, A Dangerous Method, Carrington and Imagining Argentina, the last two of which he also directed. Awards include two Tonys, an Olivier, an Academy Award and the Special Jury Prize at Cannes.

Venue to be announced.

AstonRep’s annual WRITER’S SERIES is a festival of talented local and regional writers who have an opportunity to workshop near-finished plays and works in development.  Over the course of a day, five to seven new works are read by professional actors followed by focused talkback sessions – a time-honored celebration of artistic collaboration.

AstonRep Theatre Company was formed in the summer of 2008. Since then, the company has produced

11 full length productions and five annual Writer’s Series. “An ensemble of artists focused on keeping theatre relevant by producing new works, revisiting and re-imagining classics, and uncovering timely, rarely-produced works of the past.”