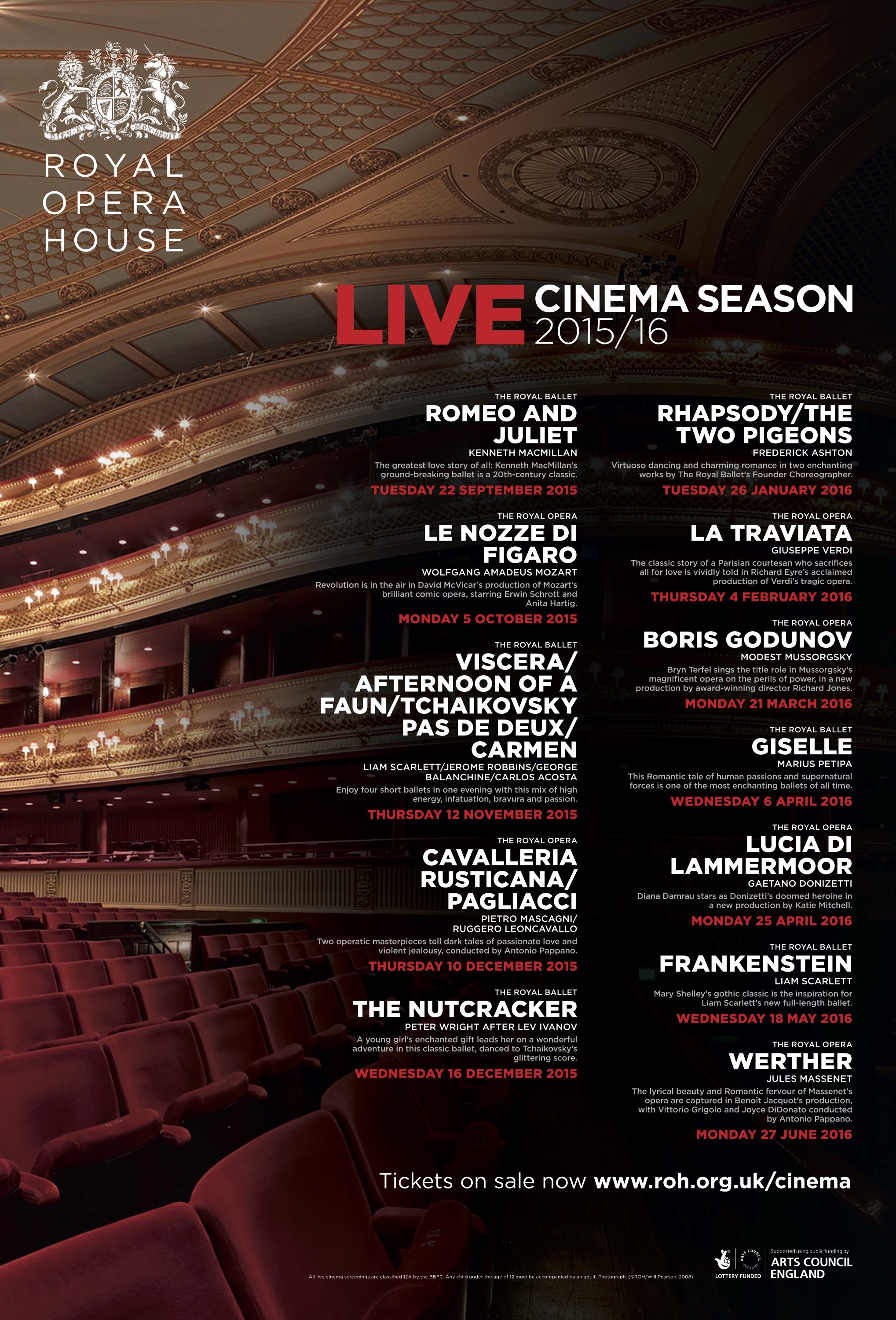 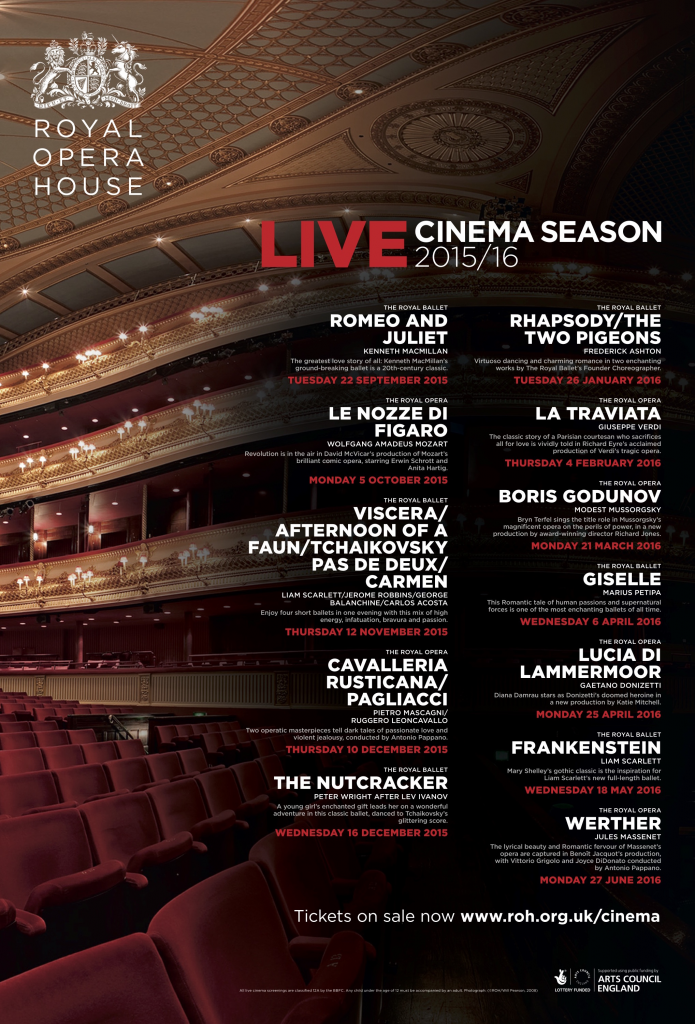 The Royal Opera House Live Cinema Season 2015/16 is the most ambitious to date. Six ballets and six operas, including five new productions, will be screened in over 1,000 cinemas across 45 countries allowing audiences in the US to experience more opera and ballet from the Royal Opera House than ever before.

The Season opens on Tuesday, September 22nd with a live broadcast of Kenneth MacMillan’s masterpiece, Romeo and Juliet. Celebrating its 50th anniversary Royal Ballet Principals, American Sarah Lamb and British Rupert Pennefather, will dance the title roles. There will also be a world premiere from The Royal Ballet in the 2015/16 Season; Carlos Acosta’s production of Carmen, which will be performed as part of a quadruple bill of shorter works in November.

Alex Beard, Chief Executive of the Royal Opera House, says: “Seeing world class opera or ballet in your local cinema can be the most wonderful experience whether you’re seeing it for the first time or whether you’re a seasoned regular.  It really is like having the best seat in the house as you get to see incredible close ups as well as the full stage action.  This Season is particularly exciting with five world premieres as well as great masterpieces such as Romeo and Juliet and La traviata.  We hope you will join us wherever you are for some extraordinary performances.”

Arts Alliance CEO Mark Foster says: “Event Cinema is growing rapidly and as the Royal Opera House Live Cinema Season broadcasts to more and more cinemas each year, increasing numbers of people are enjoying a totally unique perspective on top-class performances, previously seen only by the select few in an auditorium. We now screen in more than 1,000 cinemas, across 45 countries, and in the past two seasons 1.5 million people have enjoyed performances from Covent Garden at their local cinema. Many of those will be experiencing opera and ballet for the first time, and Arts Alliance passionately believes that Event Cinema is the key to introducing these art forms to a culture-hungry global audience which otherwise might not have access to it.”

Each screening has exclusive pre-performance and interval content including cast interviews and behind-the-scenes footage. Cinema-goers are encouraged to get involved, tweeting their questions and engaging with each other from different corners of the world.

The Nutcracker (Wright/Tchaikovsky – The Royal Ballet)

A Frederick Ashton double bill; the witty Rhapsody, with music by Rachmaninoff, and the delicate yet comic The Two Pigeons, with music by Messager and a production including two live pigeons.

Peter Wright’s production of Marius Petipa’s classic is a tale of betrayal, supernatural spirits and love that transcends death.

Donizetti’s tragic story of family feuding is presented in a new production by Katie Mitchell, starring Diana Damrau and Charles Castronovo and conducted by Daniel Oren.

The Royal Opera House continues to lead the way in opera, ballet, music and dance in the theater and the many platforms available. These include digital downloads, DVD, Blu-ray, CD – all distributed through Opus Arte and Digital Theatre – and online streaming from the internet. The relationship with Digital Theatre allows for ROH productions to be accessed on Digital Theatre’s platforms including its apps for iPhone, iPad and Samsung Smart TV. Each year the Royal Opera House Cinema Season continues to grow in size, with the 2015/16 Season screening 12 productions worldwide; six operas and six ballets with five world premieres to over 450 sites in the UK and more than 1,000 sites internationally. www.roh.org.uk

The Royal Opera House Live Cinema Season is presented in cinemas worldwide by Arts Alliance. Arts Alliance is the leading producer, financier, distributor and marketer of Event Cinema worldwide. With over 70 event cinema releases across screens around the globe, Arts Alliance develops, markets and distributes world-class shows to audiences in 4000+ screens in over 60 territories, engaging fans with the content they are most passionate about. In the fast-growing Event Cinema market, Arts Alliance presents exciting, multi-dimensional content across all genres: live opera and ballet in The Royal Opera House Live Cinema Season 2015/16, dynamic art exhibitions in Exhibition On Screen, theatre productions from Globe On Screen and the best rock & pop events including Arcade Fire: The Reflektor Tapes and One Direction: Where We Are – The Concert Film. www.artsalliance.com