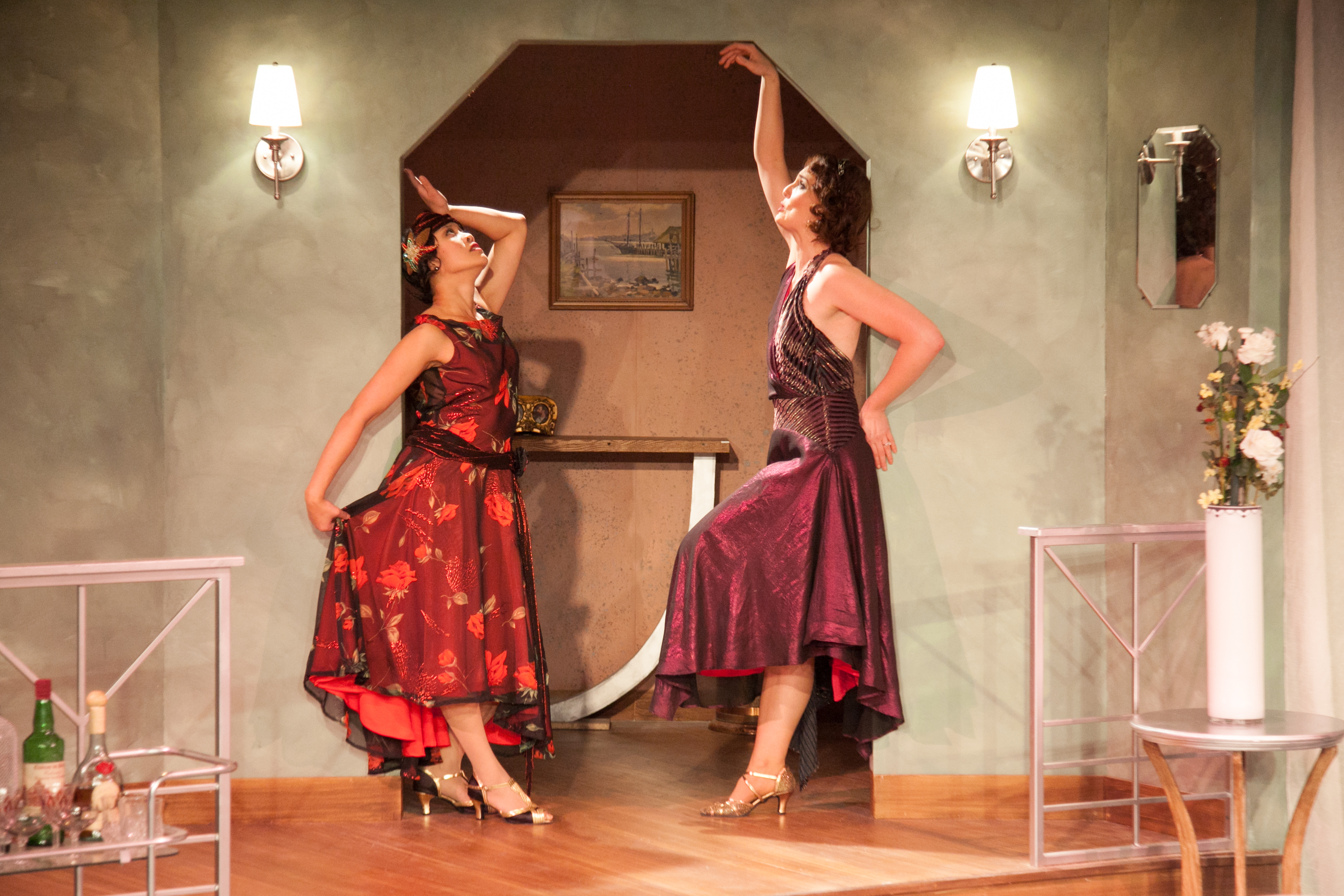 Noel Coward’s comedy of bad manners Fallen Angels is now enjoying a run at one of Chicago’s best classical theatre company Remy Bumppo who has a long history of honoring the vision and intent of the playwright by presenting their works much in the manner they intended. They also have the courage to tackle some difficult plays to pull off and Fallen Angels definitely falls into that category.

Never considered to be one of his best comedies Noel penned this unflattering portrait of middle aged marriages where passion has fizzled and temptation runs rampant early in his career in 1925. What makes this piece so fiendishly difficult to pull off is the real lack of action in the first act and the overly long scene in the second act where Jane and Julia (the two fallen angels) proceed to get drunk while waiting for a handsome French gigolo they both had an affair with before their current marriages to husbands Fred and Willy.

This is clearly a star vehicle intended for highly seasoned and mature British actresses (a legendary performance by the two Hermione’s, Gingold and Baddley, in1948 when Gingold was in her early fifties and Baddley forty-four) and the show either sinks or sails entirely upon the brilliance of their personalities, timing and sophistication.

Veteran Chicago actress (the superb Shannon Cochran), has taken the directorial reigns for Remy. Unfortunately she has been saddled with casting director Linda Gillam’s blunder in casting these two roles with actresses too young to paly them; Elizabeth Stoughton (Jane) and Emjoy Gavino (Julia). While both are undoubtedly good actresses they are simply too young and lack the worldliness and life experience demanded by the difficult script. The legendary drunk scene in the second act will not fire with young women getting drunk since the comedy of the scene revolves around the spectacle of sloppiness of sophisticated older women getting sloshed. And since Jane and Julia carry the show it never gets off the ground.

However there are moments of hilarity when they are not pushing the comedy. While these roles might miss the mark actor Jesse Dornan (Willy) and the incomparable Annabel Armour hit the bull’s-eye and capture Coward’s brittle sophistication magnificently (I would have liked to have seen Annabel Armour and Shannon Cochran as Jane and Julia). Every time they come on the stage lights up the stage, the show lifts off, and we are treated for a few moments to the dazzling brilliance of Coward.

Shannon Cochran has staged the show quite well and thought up some really priceless gags. However she has fallen into the trap of trading the English high comic style for American farce which becomes painful to watch as the two actresses who carry it become more desperate to keep us entertained by falling over sofas and off of pianos instead of maximizing the language. Even with a seasoned director with many Coward productions under his/her belt the style and essence are notoriously difficult to capture and sustain (Coward himself even had trouble keeping it steady when he directed or performed his own work). When Coward uses the word farce in labeling one his works it does not connotate the American style of physical and overplayed action (like inserting dance numbers in between acts which serve no purpose, is completely wrong for Coward and creates a cartoonish quality) but one of British reserve based more upon situational circumstances and the thin, brittle veneer being gradually peeled away as a result. His work needs to appear unself-conscious instead of the audience seeing the sweat, technique and gears that make comedy.

I also felt that the pacing (so critical to eliciting laughs from an audience) was all on the same level, lacking the peaks and valleys needed in order to provide contrast and surprise (the formula for comedy).

Coward’s world was one of opulence, therefore the sets, props and costumes need to look expensive, as this is a recreation of the world of the moneyed crowd in which he travelled. The overall production looks like it has been done on the cheap and has the feel of community theatre (a rare thing for this usually stellar Equity Company). Set trims were painted on instead of being real, door hardware looked like it was purchased at Home Depot and the painted floor and furniture did not do the set any favors (looking like they had been purchased form a second-hand shop).

The costume design by Janice Pytel is serviceable but once again lacks the dripping luxury and excess of the era and class (bugle bead gowns for the women’s formals are requisite). However Jane’s second act gown is the closest costume to achieving the right look.

I do hope that, over time, the actors will relax into the roles and find the nuances, timing and contrasts that flesh out this thin play. As this is not a Coward you are likely to see staged that often you may still want to take a trip to Remy Bumppo and help support classic theatre; a thing not usually done with integrity to the author in a city with a reputation for gritty theatre.

Fallen Angels runs through January 10 at the Greenhouse Theatre, 2257 N. Lincoln Avenue in Chicago. Tickets may be purchased on the Remy Bumppo website www.remybumppo.org or calling the Box Office at 773-404-7336.