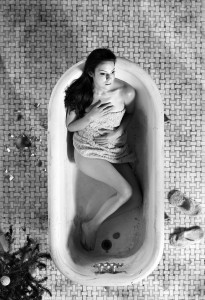 Newly married American expats Zack (Chamberlain) and Abby (Arrington) live an enviably hip existence in the colorful, multi-ethnic neighborhood of Belleville, Paris, renting an apartment from their Senegalese landlords,Alioune (Boykin) and Amina (Arenas). But when a series of small, unexpected encounters escalates the tension between them, some surprising cracks in the foundation of their isolated yet idyllic life begin to show.Belleville is a taut, edgy psychological thriller that asks: does anyone really know who they’re with?

“The play is asking us to keep two things in view: the nature of the relationship between Zack and Abby, and the difference between the two couples in the play. I think Amy is extremely skilled in maintaining that dual focus. The deeply psychological inquiry into the relationship of Abby and Zack opens up onto a cultural question. How is it that Americans comport themselves on the world stage? Is there, finally, a difference in our sense of maturity and responsibility?” notes Artistic Director Martha Lavey. “The play is an engrossing and suspenseful mystery. It’s a great theatrical ride—funny, scary, insightful and surprising. We are delighted to bring this powerful voice to Steppenwolf.”

The cast of Belleville features ensemble members Alana Arenas as Amina, and Kate Arrington as Abby, with Chris Boykin as Alioune, and Cliff Chamberlain as Zack.

Tickets to Belleville ($20 – $78) are currently on sale through Audience Services (1650 N Halsted St), 312-335-1650 and steppenwolf.org. 20 for $20: twenty $20 tickets are available through Audience Services beginning at 11am on the day of each performance (1pm for Sunday performances). Rush Tickets: half-price rush tickets are available one hour before each show. Student Discounts: a limited number of $15 student tickets are available online using promo code “BELLEVILLE15”. Limit 2 tickets per student; must present a valid student ID for each ticket. For additional student discounts, visit steppenwolf.org/students. Group Tickets: all groups of 10 or more receive a discounted rate for any performance throughout the season. For additional information, visitsteppenwolf.org/groups.

OptionsHouse is the Corporate Production Sponsor of Belleville.

Free post-show discussions are offered after every performance in the Subscription Season. Steppenwolf is located near all forms of public transportation and is wheelchair accessible. Street and lot parking are available. Assistive listening devices and large-print programs are available for every performance.