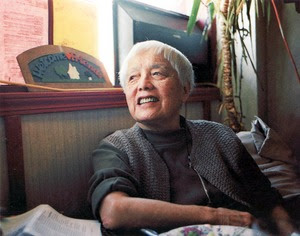 Grace Lee Boggs, 98, is a Chinese American philosopher, writer and activist in Detroit with a thick FBI file and a surprising vision of what an American revolution can be. Rooted in 75 years of the labor, civil rights and Black Power movements, she continually challenges a new generation to throw off old assumptions, think creatively and redefine revolution for our times.

Boggs is the subject of American Revolutionary: The Evolution of Grace Lee Boggs, which has its national broadcast premiere on Monday, June 30, 2014 on the POV (Point of View) series on PBS. (Check local listings). The film will stream on POV’s website, www.pbs.org/pov/americanrevolutionary/, from July 1-30.

Director Grace Lee (no relation to Grace Lee Boggs) met the older woman through her earlier documentary, The Grace Lee Project, about the shared name of many Asian American women and the stereotypes associated with it. She always knew she’d make a film about the sprightly activist who can gaze at a crumbling relic of a once-thriving auto plant and say, “I feel so sorry for people who are not living in Detroit.”

Grace Lee Boggs was born on June 27, 1915 in Providence, R.I. and grew up in New York City. She received her bachelor’s degree from Barnard College (1935) and her Ph.D. in philosophy from Bryn Mawr College (1940). Discovering that many jobs weren’t available to “Orientals,” she found a job at the University of Chicago’s philosophy library and began organizing residents of the South Side for better housing. She developed a 20-year political relationship with black historian/essayist C.L.R. James, followed by extensive civil rights and Black Power Movement activism in Detroit in partnership with her husband, black autoworker James Boggs (1919-1993). As revealed in American Revolutionary, the 1967 Detroit riots were watershed events for the couple.

How a smart, determined, idealistic Chinese American woman became a civil rights movement fixture from its earliest post-war days and, later, a spokesperson for Black Power (often the only non-black—and only woman) is a riveting tale. Boggs has maintained her dedication to humanist and even radical ideals, while tempering her understanding of revolution as an evolutionary process. Revolution, Boggs says, “is about something deeper within the human experience—the ability to transform oneself and transform the world.”

In the words of director Grace Lee, “This is not an issue film, nor is it about a celebrity or an urgent injustice that rallies you to take action,” she continues. “It’s about an elderly woman who spends most of her days sitting in her living room thinking and hatching ideas about the next American revolution. But if you catch wind of some of those ideas, they just might change the world.”

American Revolutionary: The Evolution of Grace Lee Boggs, is a production of LeeLee Films, Inc.

Download photos, embed a trailer and find out more at www.pbs.org/pov/americanrevolutionary.

About Grace Lee, Director/Producer:
Grace Lee’s most recent feature film, Janeane From Des Moines, set during the 2012 presidential campaign, premiered at the 2012 Toronto International Film Festival. Prior to that, Lee wrote and directed American Zombie, which premiered at Slamdance and SXSW before being released by Cinema Libre. She produced and directed The Grace Lee Project, a feature documentary that was broadcast on the Sundance Channel in 2005 and is distributed by Women Make Movies.

She is the recipient of the Henry Hampton Award for Excellence in Film and Digital Media and a Rockefeller Media Arts grant, as well as funding from the Ford Foundation, Center for Asian American Media, Chicken & Egg Pictures and Film Independent. Lee received her master of fine arts degree in directing from the UCLA School of Theater, Film and Television.

Based in Los Angeles, Lee, who is Korean American, is currently producing and directing an episode for the PBSMAKERS series on women and politics, as well as Off the Menu, a film about Asian American food culture, also for PBS.

About POV
Produced by American Documentary, Inc. and now in its 27th season on PBS, the award-winning POV is the longest-running showcase on American television to feature the work of today’s best independent documentary filmmakers. POV has brought more than 365 acclaimed documentaries to millions nationwide. POV films have won every major film and broadcasting award, including 32 Emmys, 17 George Foster Peabody Awards, 10 Alfred I. duPont-Columbia University Awards, three Academy Awards® and the Prix Italia. Since 1988, POV has pioneered the art of presentation and outreach using independent nonfiction media to build new communities in conversation about today’s most pressing social issues. Visit www.pbs.org/pov.

Major funding for POV is provided by PBS, The John D. and Catherine T. MacArthur Foundation, the John S. and James L. Knight Foundation, Bertha Foundation, Wyncote Foundation, The Educational Foundation of America, Corporation for Public Broadcasting, National Endowment for the Arts, New York State Council on the Arts, the New York City Department of Cultural Affairs in partnership with the City Council, Ann Tenenbaum and Thomas H. Lee, and public television viewers. POV is presented by a consortium of public television stations, including KQED San Francisco, WGBH Boston and THIRTEEN in association with WNET.ORG.