Akvavit Theatre’s NOTHING OF ME – Through April 3, 2016 at Signal Ensemble Theatre 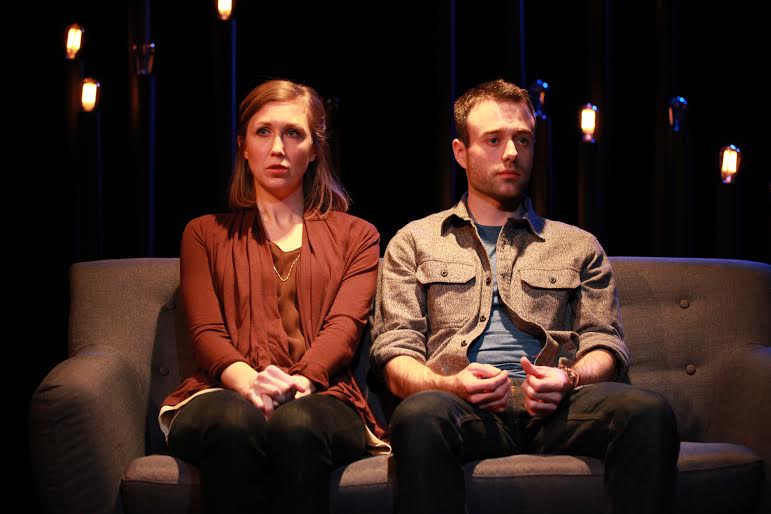 left to right) Bergen Anderson and Dan Wilson in Akvavit Theatre’s U.S. premiere of NOTHING OF ME, by Arne Lygre, co-directed by Chad Eric Bergman and Breahan Eve Pautsch. Photo by Emily Schwartz.

NOTHING OF ME features company members Bergen Anderson and Kirstin Franklin with Paul S. Holmquist and Dan Wilson.

Arne Lygre’s new play NOTHING OF ME is a post-modern ghost story. Not long after an unspeakable tragedy, a wife and mother walks away from her entire life for a new relationship with a much younger man. Is she moving on towards a bright new life, or is she sinking deeper into self-destruction? In a playful yet haunting style, Lygre delves into the bond of love, its force and its dead-ends, using ruthlessly telltale dialogue. The play warns us of the danger we are all guilty of when we imprison others within our expectations, through the very love we feel for them.

Title: NOTHING OF ME

Arne Lygre made his debut in 1998 with the play Mother and Me and Men. Since then he has written six other plays, which has been staged and published in countries around the world. Man Without Purpose was directed by Claude Régy at Odeon Théâtre in Paris in 2007/08. I Disappear, premiered at La Colline Théâtre National in November 2011, directed by Stéphane Braunschweig. For his short stories collection, In Time, he received the prestigious Norwegian literary award Brageprisen in 2004. He has also written two novels, A Last Face and My Dead Man, which both was very well recieved by the critics. He was awarded the literary award Mads Wiels Nygaards’ Legacy in 2010.

Chad Eric Bergman actively collaborates in the Chicago Storefront scene having worked with Stage Left, Live Bait, Chicago Dramatists, MPAACT, parker, Plasticene and Akvavit in various artistic ways. He has been an artist in residence at the Ragdale Foundation and the University of Chicago’s Summer Incubator. He spent a year in Finland on a Fulbright exploring bilingual theatre. At North Park University, he has been developing a theatre curriculum that is based on the Chicago Storefront Theatre model.

Breahan Eve Pautsch has been working in Chicago as an actor and director since 2003. As a director, she has worked with Akvavit, Raven Theatre, The International Voices Project, Hobo Junction Productions, Full Voice Productions, Mudgeonsoul Cinema and Stockyards Theatre Project.

As an actor, she has worked with various theatre companies including Akvavit, Hobo Junction Productions, Halcyon Theatre Company, Chicago ScriptWorks and The Side Project. On film, Breahan has worked with Mudgeonsoul Cinema, Full Voice Productions and Butcher’s Son Films. She is originally from Chippewa Falls, Wisconsin and earned her BA in Theatre and English at UW-Madison

Akvavit Theatre is a new voice in the Chicago theatre scene. Taking as our inspiration the striking landscapes of the five Nordic countries—harnessing the force of the glacier, in its powerful seeming stillness, the volcano, in its sudden white-hot eruption, and the arctic silence in between—we strive to find the universal through the voices of the Nordic world. This is our contribution to the American mosaic. And like our namesake drink, Akvavit brings a “strong spirit” to the plays, workshops and events that we produce. Skål, Skál, Kippis! For additional information, visit www.akvavittheatre.org.